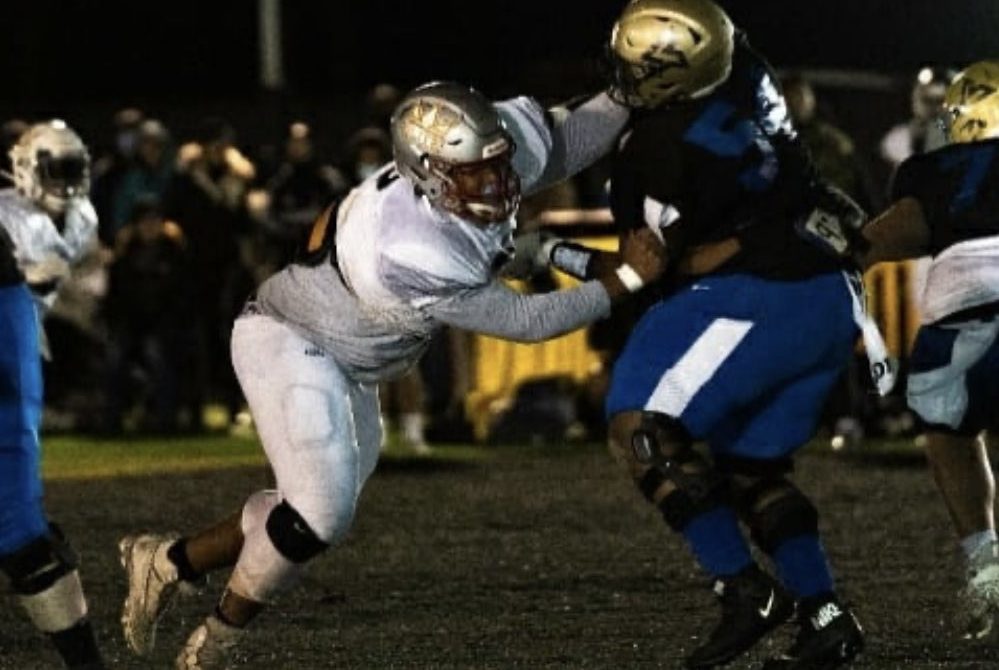 Just four of the top 50 defensive tackles in the 247 Sports 2022 position rankings can be found in the Pac-12 footprint, with two in California, one in Arizona and one in Utah. But there might be another one joining that group soon, and he’s quickly turning into one of the more intriguing prospects in the entire 2022 class.

Hero Kanu is not your average 16-year-old. If the name didn’t clue you into that, one glance at his massive 6-foot-5, 295-pound frame will do it.

Kanu arrived at Santa Margarita this past October and head coach Anthony Rouzier said he was more than advertised.

“He’s huge,” Rouzier said. “You know when you see pictures of people and they’re big but you think, are they really this big? And they always look a little smaller. He’s that big. Big head, big legs, big quads, big calves. And he’s such a nice kid. My first impression was, this kid is a baby. He’s 16 and he’s like an NFL combine 6-foot-4, maybe 6-5, and 290 pounds.”

Kanu had a path to Santa Margarita, as he followed Maurice Heims from Germany. Heims landed at Santa Margarita in the summer of 2019 and signed with Washington in the 2021 class. Kanu looked hard at IMG as a potential destination, but settled on Santa Margarita as he was looking for a more all-encompassing high school experience.

Athletically, Kanu has blown away all expectations.

“You see him move laterally, see him do stuff and you think, wow, this is different,” Rouzier said. “There is still a lot of development to do, but it’s incredible how much he’s done already, with only a month of padded practices with us. He’s raw, but that’s the thing that’s excited us and what all the coaches see — the development he’s had from not playing football before. He’s getting better.”

Rouzier is a great match for Kanu, as he coached the Hamburg Huskies of the German Football League before joining Santa Margarita as the linebacker coach and eventually the head coach. Rouzier understands the differences in cultures and mentality between the two countries and said the biggest jump Kanu needed to make was finding a different level of intensity once he steps between the lines.

That’s been an increasingly common sight, as Rouzier said Kanu suffered a number of bloody noses during their first padded practice, as he put hit after hit on people. The biggest test came last week, as Santa Margarita played its first game of this spring season. The Eagles beat Mayfair 54-16 and Kanu played well. It was the first time he was really able to tackle an opponent and show the physical nature of his game.

“He took a big step in that game,” Rouzier said. “He hadn’t really put his face on somebody and hit them, but yesterday in practice he was picking people up and moving them.”

There are things still to work on when it comes to playing the game at a high level and becoming a highly-regarded prospect. Rouzier said there are times when he gets too high and tries to peek into the backfield, and he’s still learning a lot of the intricacies of the game. His athletic ability allows him to see the field at this level, but Rouzier said he’s mostly used as a cover down defensive end with second-level help. But he sees the potential finished product as well.

“The sky is the limit for this kid,” Rouzier said.

Kanu is originally from from Bavaria, Germany and he now lives with a host family in Southern California, as he mother is back in Germany. Before he physically transferred to Santa Margarita, he was taking classes online back home, dealing with a nine hour time difference.

“He’s super intelligent,” Rouzier said. “He was doing well in school even virtually, before he came here. Mentally, he can pick things up quickly and he has a knack for football…It’s starting to click fast.”

Fast enough that college coaches have come running based on workout videos, word of mouth and that one game of high school football tape.

Kanu came into the season with an offer from Penn State, which has aggressively recruited European players of late. In the days following the game, both USC and Washington offered. Throughout the rest of the week, he added offers from Arizona, Colorado, Kentucky, Michigan, Oregon and TCU.

Rouzier said he has little doubts that Hero will handle the newfound attention in stride, due to his upbringing and level head.

The USC offer came courtesy of Lenny Vandermade, who coached with Rouzier at Santa Margarita for a bit several years ago. Rouzier said the USC offer came very fast, but those kinds of offers coming in wasn’t unexpected after that first game.

“He went out and did exactly what he needed to do,” Rouzier said. “With USC, they saw it. Lenny called and said we want him.”

Having been around him now for some time, Rouzier understands that sentiment completely.

“He’s a big, smiley, goofy, lovable kid, like a big teddy bear. He’s a great kid and has a special presence about him,” Rouzier said. “I mean, he’s a gigantic kid from Germany named Hero.”

The next test for Kanu will come Saturday night, as Santa Margarita takes on St. John Bosco and its dominant offensive line, led by 2021 USC signee Maximus Gibbs and top USC 2022 offensive line target Earnest Greene. Matching up against those two will be a huge test for Kanu, and one that could vault him even higher up recruiting boards if he can put together a strong showing.

With a big game against the Braves tonight, the Eagles will also have a few standouts on display.

Rouzier gave some notables from his roster.

The prospect with the highest upside might be freshman linebacker Syncere Brackett, who started for the Eagles in the first game of the season. The 6-foot-1, 220-pound linebacker is potentially on his way to stardom and Rouzier called him “a monster.”

Rouzier called junior Jalen Jones a De’Anthony Thomas type of scat back who could start to pop on radars soon. Jones had 146 total yards and a touchdown against Mayfair.

Athlete Raymello Murphy is a senior who plays football and baseball and Rouzier thinks he could have landed some Group of 5 offers had the fall season taken place.

Nico Lopez is a 2023 big wide receiver as a Flex Y who can play receiver and move inside. Brayden Holmes is a 2023 wide receiver/defensive back with an offer from Arizona State, and Jalani Liva is a 2023 interior offensive lineman. All are prospects to watch in the next recruiting class.

Quarterback Colt Fulton is still looking for a landing spot for next season, as the 6-foot-4, 195-pound quarterback was a three-star prospect in the 2021 class.

And looking well down the line, Rouzier believe freshman defensive end Levar Talley could be something special, which would give the Eagles quite a 1-2 punch in the defensive front with he and Brackett.