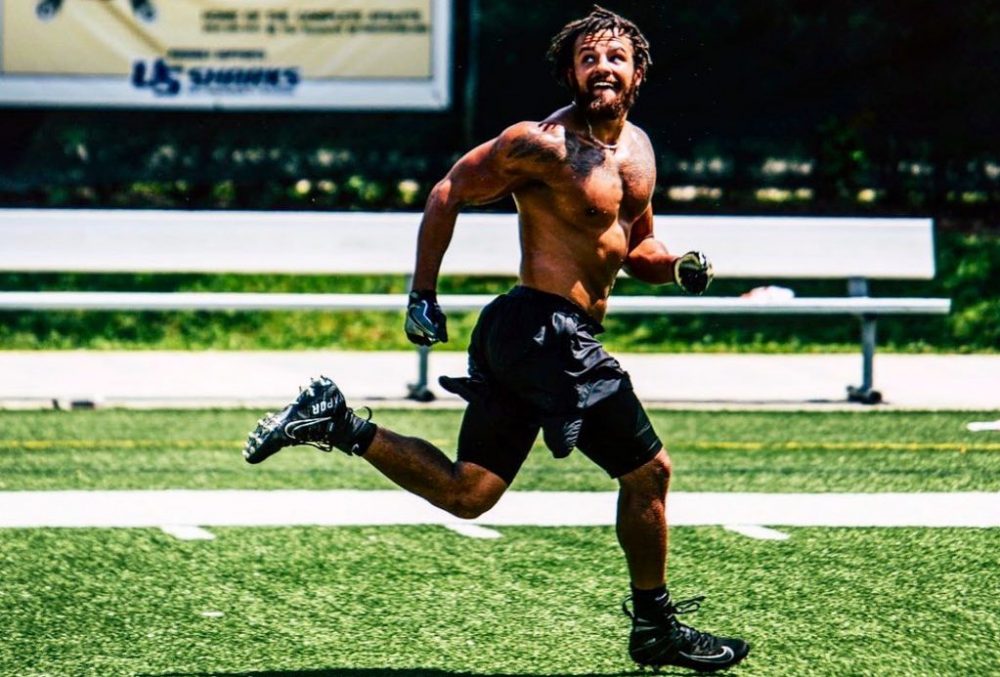 USC didn’t sign a running back in the 2020 recruiting class, but they’ll add a new face at the position this fall, as Samuel Oram-Jones will join the Trojans as a walk-on.

USC has become home to walk-on tailbacks before, but none quite with the same backstory as the 5-foot-8, 204-pound Oram-Jones, who didn’t play football until he was 19 and is one of very few college football players who needs to specify that “football” means, “American football.”

Born in the UK, Oram-Jones grew up as a competitive driver–first karts and then into F4 and on track to become a Formula 1 driver– before giving that up at 18 when he was attending Durham University. But sports had become a huge part of his life and Oram-Jones said he couldn’t go without them.

“No real reason,” Oram-Jones said. “It was on a whim. I didn’t know the rules. But I thought, these guys look cool.”

“They said, ‘You have some speed; we think you should play running back,'” Oram-Jones said.

So in 2017, at 19-years old, Oram-Jones began his second athletic career. He served as the backup running back in 2017 and then took over as the starter in 2018, eventually scoring the final touchdown that helped Durham win the BUCS American Football National Championship.

Running back was a natural fit for Oram-Jones, who was accustomed to using his vision to make quick decisions and navigate his way through traffic.

“It’s similar to racing in that everything happens very quickly,” he said. “You have to use your peripheral vision to avoid things and find the fastest route and react instinctually to things.”

From that point, it looked like an easy two-step plan, as he’d head across the Atlantic to play college football in America and then be off to the NFL.

“My opinion at the time was that I’m the best running back in my entire country,” Oram-Jones said, adding that the process did not turn out to be as easy as he’d hoped.

In 2019 he finished his Durham degree and began attending Vanderbilt, which had scouted him academically and invited him to the school entirely due to his academic performance. Once there, he set about his plan to join the football team.

“I showed them my tape and told them I’d won a national championship in the UK,” Oram-Jones said. “Politely, they told me, ‘No,’ and to maybe come back in February and they’d think about it.

“That was a tough one, but I didn’t travel halfway across the world for nothing.”

Oram-Jones attended Tennessee Titans scrimmages and was able to grab the attention of head coach Mike Vrabel for a quick back-and-forth.

“He said I needed college game tape or it’s not going to happen,” Oram-Jones said of Vrabel. “He said to speak to [Vanderbilt head coach] Derek Mason.”

“I said,’ He’s a tough man to come by,'” Oram-Jones recalled, as his previous interaction with the football department had risen only to the level of the recruiting staffers. “He told me very sternly that I needed to see the head coach.”

In that quest, Oram-Jones went to Vanderbilt every day during fall camp to try and figure out when the team finished practice, when they entered and exited of the facility and when he could find some time to speak with Coach Mason.

It wound up happening at 11 pm one night while Mason was walking to his car.

“I jumped him and asked for 20 seconds of his time,” Oram-Jones said. “I said, ‘I promise if you give me 20 seconds of your time, it’ll be worth it. I promise you I can bring value to this team.'”

Oram-Jones said Mason–for good reason–didn’t want to have the conversation right then, but invited the running back to meet him in his office the next morning. There, Mason had a look at his film and said the team would give him a tryout.

“For me, it was a huge success,” Oram-Jones said. “I had half a foot in the door and I had to try to get my full foot in.”

The day before Vanderbilt’s season-opener against Georgia, Oram-Jones got his tryout.

“Every coach I could think of was there,” he said. “There were a lot more than I expected. They ran me through every drill they could give me and I thought, ‘If this doesn’t go well, it will be a very abrupt end to my American football career.'”

Several weeks later, Oram-Jones heard that he would be brought onto the team, though he was assured he would have no chance to progress past serving as a scout team player that year. Beginning with the team the fourth week of the season and understanding he wouldn’t immediately be trusted by the coaching staff to do much of anything, Oram-Jones eventually worked his way up in that role until he was named Scout Team Player of the Week later in the year. He also said he was named Fleet Leader on the sidelines for the last two games of the season.

“I’m quite a loud guy on the sidelines,” he said. “Maybe it’s a British thing.”

Oram-Jones said the Vanderbilt coaches told him that he’d definitely have an opportunity to make an impact on special teams in 2020, and potentially play running back in the SEC before trying to transition to the NFL. But Oram-Jones said he wanted to look for other opportunities and decided to enter the transfer portal.

This offseason has been about getting into football shape for Oram-Jones, who has gotten plenty of help in that regard. Training at a pro facility in Florida, he’s spent time working out out with NFL running backs LeSean McCoy and Frank Gore, as well as other pro football players, working in small groups with a professional trainer. It might have been overwhelming for someone without Oram-Jones’ background, but he’d become accustomed to rubbing elbows with well-known athletes during his racing career, as he went up against drivers such as Lance Stroll, Charles Leclerc and George Russell.

Oram-Jones said Gore took him under his wing this offseason and the two would work through difficult conditioning sessions in the 100-degree Florida heat.

“I’m not going to turn down that offer,” Oram-Jones said of working with Gore. “I’ve made more moves this offseason than I ever have in football.”

During this time is when Oram-Jones got in contact with USC, and specifically, Assistant Director of Player Personnel Drew Fox. Oram-Jones sent the Trojans his offseason tape and game film and USC sent back an offer to join the team as a preferred walk-on. Oram-Jones also said he had a tentative walk-on offer at Florida, but it was the culture at USC that sold him on joining the Trojans.

He said the USC staffers he spoke with sold him on the Trojans culture being one of fair competition.

“If you’re good enough to play, you’re going to play,” Oram-Jones said of their message. “Being an international guy, I’m not looking for any special treatment.”

Oram-Jones landed in Los Angeles last week and is scheduled to join the team on Monday, after he passes his medicals and tests. Now 22, Oram-Jones has said he could potentially apply for an extra year of eligibility, but he heads into this season assuming it’s his final one before trying to make the leap to the next level. Obviously, his plan isn’t a given due to the difficulty of the transition he’s attempting to make, as well as now the uncertainly surrounding the season due to the pandemic.

He made sure to look at what he was going into before making his ultimate decision, as he studied the USC running back depth chart and also spoke with quarterback Mo Hasan, who is making the same move from Vanderbilt to USC as a preferred walk-on.

“Certainly I had asked Mo’s advice and he had an insight into the culture compared to Vandy, as far as the coaching staff and whether it would be a good place to go,” Oram-Jones said. “I’ve met with Markese [Stepp], JJ (John Jackson III) and Amon-Ra [St. Brown] and everyone seems like great guys. It’s a competitive culture and these guys love the game. They have an energy about them that I want to be a part of.”

With multiple players returning at the position who saw time last year–including two sophomores–Oram-Jones doesn’t see that as a block to seeing the field this season. USC went deep into the running back rotation last year after losing its top three backs to injury. That led to relying heavily on true freshman Kenan Christon and even finding ways to get St. Brown the ball out of the backfield.

“You have Stephen Carr who is a five-star, and Vavae is a very good player,” Oram-Jones said. “Markese, and [Kenan] Christon started three games last year. The thing I like about USC is it’s an open competition at the running back position. There are four guys vying for the starting role, as opposed to schools where one guy gets 95% of the carries and that’s it. It provides an opportunity where if you’re good enough to compete, there’s an opportunity to play.”

“I’m going to do what I can to surprise people.”