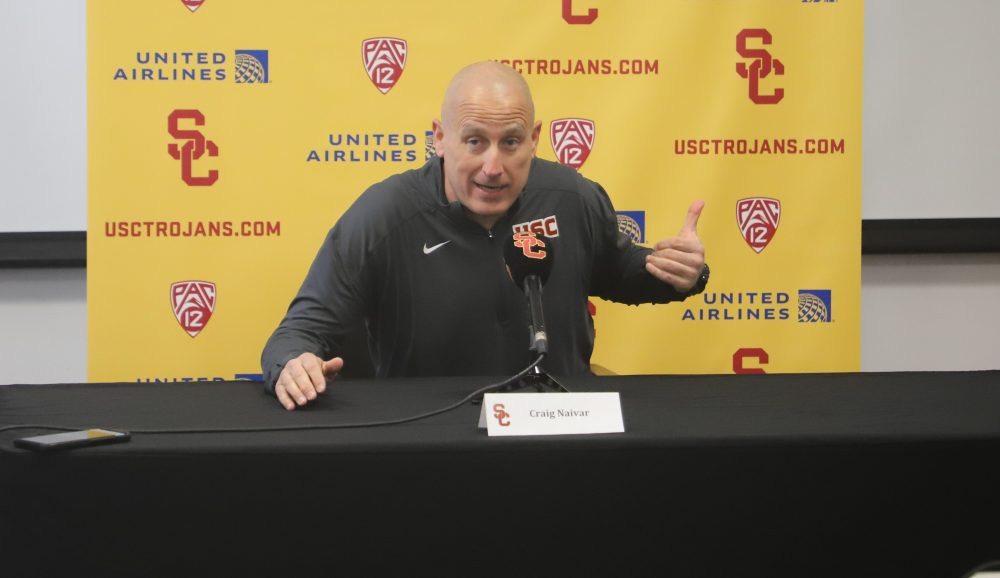 USC safeties Craig Naivar fired off more than a few quotable lines during his introductory press conference on Tuesday, including comparing recruiting to shaving, “Run and hit,” and how to improve tackling.

Naivar showcased his upbeat energy and no-nonsense answers during Tuesday’s media availability, as one of the new defensive coaches charged with bringing change to that side of the ball.

On establishing toughness:
“We haven’t put any pads on yet, so toughness is, to a certain point—attention to detail, accountability, little things, making sure we’re taking care of our business classroom-wise, being on time, getting after it in the weight room and those type of things—Double A (Aaron Ausmus) is doing a hell of a job down there with those guys. And the entire staff, Coach Helton does a great job of getting everybody in line and going the same direction. So you can start to build those thought processes of toughness and accountability that way. But until we put pads on, on the 14th, and subsequently from there, then we’ll talk about real toughness at that point going forward.”

On Orlando’s defense:
“Run and hit. It’s a simple mantra. What we do, run and hit. I think I caught the tail end of what he was talking about. We’re going to have mistakes as far as assignment, responsibility, things like that. Stick your foot in the ground and go run through somebody’s face. That’s what this game is all about—being the most physical team on the field, enforcing your will on an opponent is how you win football games. You stop the run, run the football, and hit people. That wins football games.”

On his relationship with Todd Orlando:
“We were very fortunate when we came together at the University of Houston. We did not know each other at all. We’ve got very similar philosophies of attacking styles of defense, multiple styles of defense. We put a high premium on being physical, and those type of things. Some would say we’re kind of off a little bit, which may make us bond a little tighter. But he’s like a brother to me. I value his friendship and more importantly, he’s a damn good ball coach and I’m excited to be with him again.”

On recruiting:
“The biggest part of recruiting is relationships. Recruiting is like shaving. If you don’t do it daily, you look like crap. It is an ongoing, daily deal. You can’t just rely on the brand to go out and recruit. You’ve got to build relationships and it takes a village. It’s their families, coaches, associations. Who’s the champion for that young man in the home, outside the home? All that stuff. Establishing that. And, recruiting as a staff. It’s not just one guy recruiting a certain player. It’s four to five to six guys in constant communication with that young man and his family to where he feels like USC is recruiting me, not just a particular guy. So in previous places we’ve been, we’ve attacked it that way and had success with it.”

On whether he has the players to work in this scheme:
“We’ll find out after we put some pads on. I’ll have a better answer that in June, July, and more importantly, in August and September. Excited about the young men that are here. One thing that kind of drew my eye is, I was gameplanning for Utah, getting ready to play the Alamo Bowl, and there was crossover reference of watching these guys play against Utah on that side of the ball. I saw guys that could run and flew around the ball, and a lot of really good football players out there. So, excited to see what they can do once we get on the field.”

On the role of the safety in this defense:

“Truly fun. They’re sort of the quarterbacks of the defense. We make all the checks, we make alignments. We check coverages, we check blitzes. Coach Orlando uses those guys in a bunch of different ways. So, we’re not so much just a quarters team or a one-high team, we’re going to spin you, rotate you, be extremely multiple with the safeties. It’s an NFL-based scheme in that regard. It looks extremely complicated for opponent offenses, but it’s really not, once we learn and teach these simple aspects of what we do. But it’s a real fun system to play in because one play you could be in the post, the next play you could be blitzing the A gap.”

On working with cornerbacks coach Donte Williams:
“It’s been awesome. I clicked with that guy from the moment he walked in the door. I’ve known of him through recruiting circles and stuff like that. He’ll work with the corners, I’ll work with the safeties, and we’ll work together with everything as we will with Vic and Coach O, and doing what we do. Coach Orlando does a hell of a job of staff input, staff gameplanning, and then he does a remarkable job on gameday of calling it. He’s one of the best playcallers in football, period. Not just college football.”

On how they’ll handle dime and nickelbacks:
“Based on what young man is playing that position and what room they come out of, we’ll work from there.”

Big, physical and jumped in the fight. We had a bunch of DBs that were part of a historic signing class that were now coming into their second year. Here comes 5-star Bru jumping in, so they all want to take a shot at him and he didn’t back down. That was impressive for a young guy that’s coming in as a true freshman during spring ball. That was what most impressed me, is those guys were taking shots at him every day, kind of testing his water, for lack of a better term, he got after it and competed, so I’m fired up about that.”

On head coach Clay Helton:
“He has been amazing. Through the job process and coach Helton reaching out. I knew of him through the coaching fraternity before that. But when you start calling around and asking about him, every single response I got from everybody I talked to was what an unbelievable person he is, how great he is with his players, and everything has been 100% true. When we came up to visit, you could feel in five minutes, this is a real guy. This guy cares about his players. This guy has a plan. This guy has a system. This guy’s a damn good ball coach. And that’s not like that everywhere in this profession. Not only is he a good dude as far as a ball coach, he might be one of the best people I’ve ever met in my life. I’m not just saying that because he’s my boss. As you guys get to know me, I’m going to pretty much tell you what I think, and he’s a real dude.”

On the ideal safety for this system:
“Depends what role we ask him to play. We are adaptable for what a young man’s skill set is, to where we can put him to do what he does best. If I had to clone a guy, I’d throw five Marvell Tells out there. This system works well because we can play upon a young man’s strengths and hide their deficiencies as we develop those, to not make them deficiencies anymore. We like speed, we like length, and we like guys that like to hit people. Big, fast, and guys that strike.”

On how he’d describe this defense:
“Attacking and multiple.”

On so many Texas coaches on staff and potentially recruiting Texas:
“We’re hitting California first. Obviously that’s our backyard; that’s our bread and butter. And then we’ll go wherever we need to go outside to supplement what we need. We’ve got a really good group of guys that have really deep ties out here. But at the end of the day, recruiting is relationships and people of where you’re at. At the previous school I was at (Texas) I signed a safety from Mayfair High School, out here, and I didn’t know a soul out here. But it was just relationships and getting to that young man and his family. So, as far as where we’re going to hit, we’re going to hit where we can find the best players. But obviously our No. 1 focus as we go forward is starting here.”

On USC special teams coach Sean Snyder and facing him while at Kansas State:
“He is the most detailed and prepared coach in collegiate football in special teams. You’re not going to find a weakness in scheme or technique playing against the guy. Your guys are going to have to physically whip and win a one-on-one to beat him. He is extremely detailed. He has a ton of experience. And he does a great job of getting guys to play extremely hard and buy into their roles…He’s damn good at what he does. I’m fired up we got him here.”