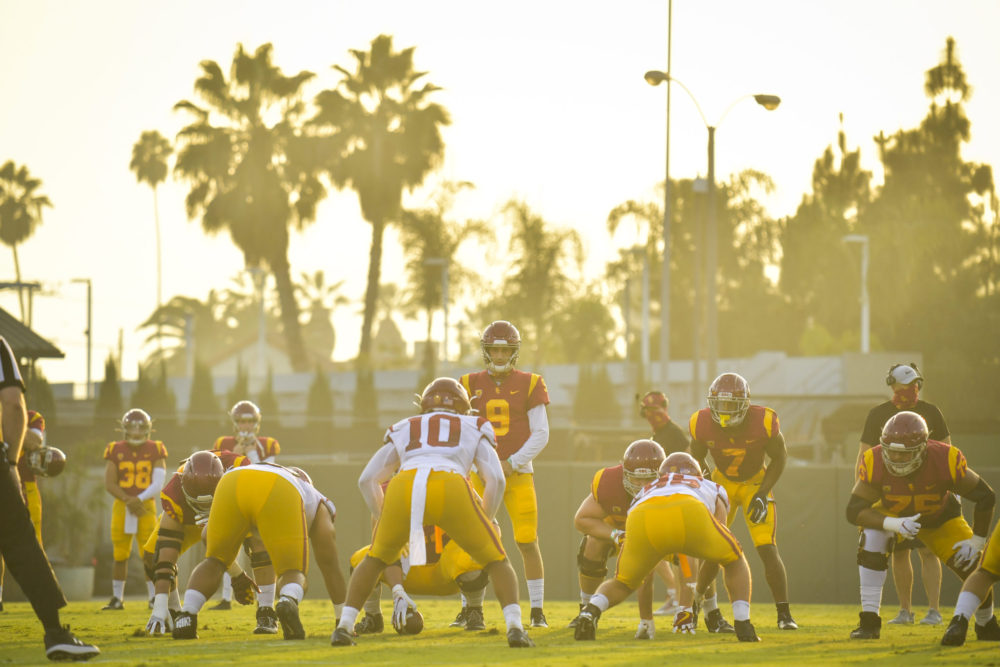 The USC football team will take the field this afternoon for the first practice of 2021 spring ball and head coach Clay Helton said there will be several points of emphasis for the Trojans over the next 15 practices.

USC is coming off a 5-1 season in 2020, which included a loss to Oregon in the Pac-12 Championship Game. While there were some bright spots and memorable games, including late come-from-behind wins against Arizona, Arizona State and UCLA, it’s tough to imagine that magic sustaining the Trojans for an entire season. And the items on which USC will focus this spring come as no surprise.

On the offensive side of the ball, it starts with the running game. USC ran for fewer than 100 yards per game last season and just 3.2 yards per carry. Helton said it’s all about efficiency in the run game, rather than just focusing on boosting the overall number of rushing yards.

“We have to be more efficient,” Helton said. “There’s going to be times when you’re going to play a Washington State and you’re getting Cover 1 every snap. And if we have to throw the ball every down, we will. But when we see those advantage coverage looks and we have an advantage box to be able to run to with equal numbers, that’s where we’ve got to be more efficient. Also obviously we want to be more efficient in third-and-short and goal-line situations in the running game.”

USC added a big back to the roster in Texas transfer Keaontay Ingram to go along with returning seniors Stephen Carr and Vavae Malepeai. The Trojans will need to find answers up front, as there is a huge hole at left tackle following the departure of Alijah Vera-Tucker.

The overall play of the offensive line will be a key to Helton’s second point of emphasis on offense.

“We ended up with 15 sacks last year, which is about one in every 17 throws,” Helton said. “It’s going to be so important to keep [Kedon Slovis] upright and keep him protected.”

On the other side of the ball, defensive coordinator Todd Orlando wasted no time in working to get his biggest issue righted this offseason. Helton praised the defensive coaches and defensive players for being able to get an entirely new defensive system installed in just five weeks. But USC was not great on third downs, and improvement there is vital for this upcoming season.

“Third down-wise, we can improve,” Helton said. “We were not in the top 50 in third-down efficiency. We’re going to make that a priority.”

Helton said Orlando made that one of his points of emphasis and has been pushing that during walkthroughs.

“He immediately started installing third-down defenses and some of the ideas that he wants to get to this season,” Helton said of Orlando.

The other big push defensively is to not allow a dip in the turnover numbers. Helton said the 16 turnovers last year — nine interceptions and seven fumble recoveries — was a big part of their run to the conference championship.

On special teams, Sean Snyder will get a full spring to work with those units. Helton credited him, just as he did with the defensive coaches, for working those groups into a solid state despite the abbreviated period in which they had to work.

USC will also need to get a read on its return game this spring. There are a few players with kickoff return experience, and Gary Bryant Jr. had one of the big returns in USC football history last year with the late-game runback against UCLA, which set the Trojans up to take a late lead. But the Trojans do not have a player on the roster who has returned a punt for USC, though transfer wide receiver K.D. Nixon handled a small number while he was at Colorado. Finding a group that can consistently catch punts and give USC more of a threat in the punt return game than it got last season, when the Trojans averaged just 4.3 yards per return.