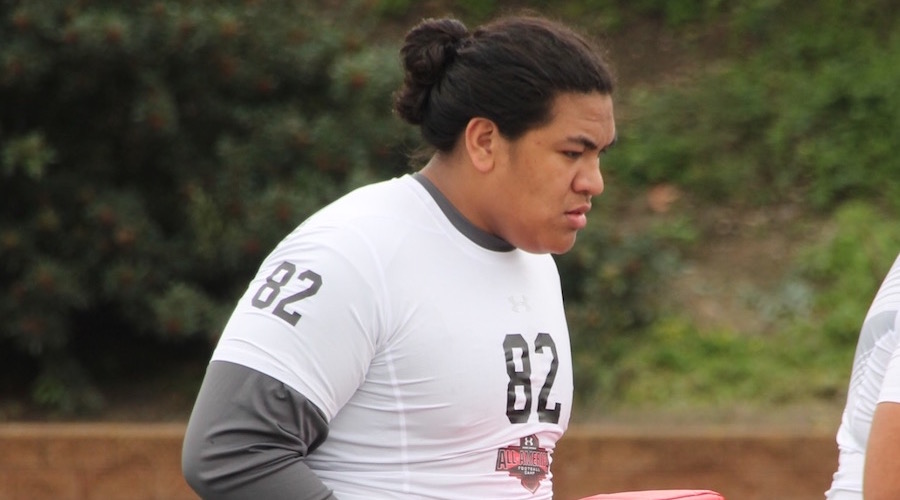 Give the top five uncommitted prospects on your wish list:

1. WR Amon-Ra St. Brown (Mater Dei): You can never have too many elite playmakers and St. Brown is the best one I’ve seen so far in this class. Fundamentally sound and fast but what stands out to me is how physical he is.

2. LB Solomon Tuliaupupu (Mater Dei): He would be the cherry on top of the linebacker class sundae, although I would love to be greedy and add Merlin Robertson as well. In the meantime, I will pair Solomon next to Palaie Gaoteote and enjoy watching the results.

3. CB Olaijah Griffin (Mission Viejo): The Trojan corner depth is good but not great and I want to load up in this class with three at the position. Griffin is a playmaker with terrific cover skills, and he comes from a school with a tradition of sending players to SC.

4. CB Isaac Taylor-Stuart (St. Augustine): I will finish off my corner class by adding a 6-2 player who ran a 4.43 at The Opening.

1. CB Isaac Taylor-Stuart – The Trojans need at least two, if not three cornerbacks in this class, and Taylor-Stuart could be the best of the bunch. In fact, when I spoke to him earlier this spring, he said that USC DB coach Ronnie Bradford told him that he was the top guy on his wish list. That’s good enough for me.

2. OL Penei Sewell – The Trojans just reeled in a great offensive line class, but you can never have enough depth there, and Sewell (photo above) might be the top guy that USC is in on. Standing 6-foot-5 and 340 pounds, he obviously has the size to potentially contribute early – either at tackle or guard.

3. WR Amon-Ra St. Brown – No player has made more of a statement with his play this offseason than St. Brown, who has shined on a weekly basis at various 7-on-7 tournaments and camps. An explosive big-play threat, he has the potential to add a unique dimension to whichever offense he plays in on the next level.

4. TE Camren McDonald – A big, athletic pass-catching tight end who can also be split out at wide receiver, McDonald reminds me of Mike Williams, who enjoyed quite a bit of success at USC. He is another player whose unique skill-set makes him a must-get.

5. LB Solomon Tuliaupupu – Sure, the Trojans already have three outstanding linebackers in the fold, but Tuliaupupu is another big-time prospect you just can’t pass up. Big and physical with great instincts, he’s a versatile enough athlete that he can play on the inside or outside on the next level.

1. WR Amon-Ra St. Brown (Santa Ana, Calif./ Mater Dei): This kid is simply electrifying. He is quicker than lightening coming out of his cuts, and he is very physical despite being listed at 6-foot.

2. WR Jalen Hall (Los Angeles, Calif./Hawkins): If Amon-Ra St. Brown is the lightening bug, then the 6-foot-3 Hall is the perfect bookend opposite. Hall has suction cups for hands, is frightening at high-point receptions, and is sneaky fast.

3. CB Isaac Taylor-Stuart (San Diego, Calif./ St. Augustine): If you’re looking for a big corner (6-2), Taylor-Stuart is probably your guy. I like his toughest and his ability to compete.

4. OL Penei Sewell (St. George, Utah/Desert Hills): Seeing him in person, he’s all there. He moves well for a big man, and Trojans can always use a tough, physical lineman.

5. LB Solomon Tuliaupupu (Santa Ana, Calif./ Mater Dei): It’s a great year for linebackers, and I liked what I saw at the Los Angeles Nike Camp. Let’s fact it, when you get a Mater Dei prospect, you know you’re getting a disciplined and physical football player.

1. CB Isaac Taylor-Stuart – in the pass happy Pac 12, good cornerbacks are a must, and Taylor-Stuart is the best in the West. At 6’2, the San Diego athlete has great footwork, can open his hips and run, and is physical against the run game.

2. LB Solomon Tuliaupupu – an impressive frame on top inside LB prospect from Mater Dei High School at 6’3, 230lbs. Tuliaupupu is the kind of wrecking ball the Trojan defense loves at the strong-side inside linebacker spot.

3. WR Amon-Ra St. Brown – simply the most polished wide receiver in the West. St. Brown comes from a family of excellent football players, and is a great route runner with fantastic hands.

4. RB Keaontay Ingram – the state of Texas has been good to SC recently at the running back position. Ingram could continue the trend as a playmaker with vision, balance and the ability to make defenders miss in a phone booth.

5. OT Jackson Carman – this prototype offensive tackle at 6’6, 290lbs from Ohio recently stated he is anxious to visit Southern California. Clemson and Ohio State are thought to be the leaders at the moment, but Carman has made it clear that he is California dreamin’.