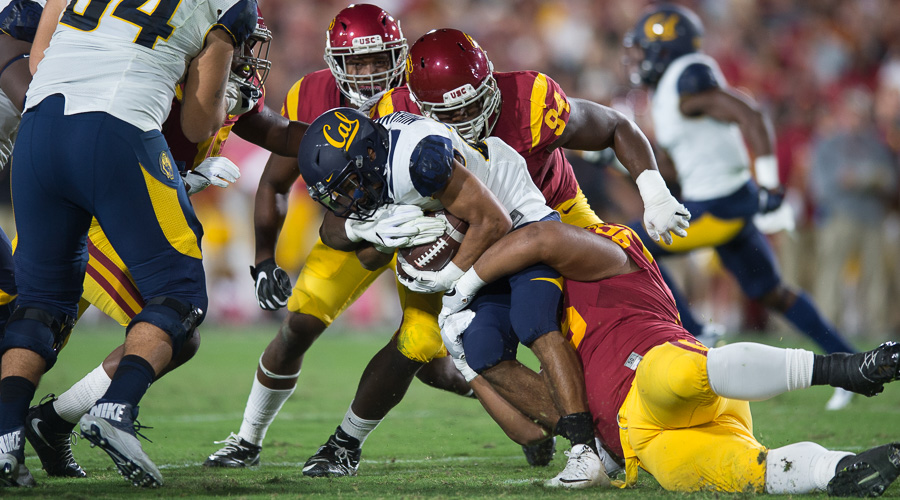 What match-up favors the Trojans the most in this game?

Garry Paskwietz: It’s hard to say you think the best match-up is one that involves going against a defense that is ranked in the top 25 nationally in 8 different categories but that’s how I feel about the USC offense facing the Washington defense. And a big part of that optimism is the lack of Joe Mathis as an edge rusher for the Huskies as he is out for the season with a foot injury. Washington had 24 sacks in the 6 games with Mathis but only 3 sacks in the 3 games he has been out. Meanwhile, the USC offense has been averaging 571 yards per game the last 5 weeks and is getting balanced production across the board.

Johnny Curren: Sam Darnold vs. the Washington pass defense. There’s no denying that the USC offense faces a stiff challenge in a Huskies defense that allows an average of just 17 points per game. With outside linebacker Joe Mathis out of the lineup, however, this group just isn’t the same. The Washington defense compiled 24 sacks in the six games that Mathis played in to begin the season – compared to a total of just three sacks in the last three games. Without a formidable pass-rush, I think that Darnold, a unique playmaker, might just be able to flourish in this game.

Greg Katz: The match-up that favors the Trojans the most is probably defensive coordinator Clancy Pendergast and his schemes against the Huskies and head coach Chris Petersen. Pendergast has seen it all and done it all in defending high powered defenses, and this will be extremely helpful against an offensive guru like Petersen. I like the Trojans chances if they can execute Clancy’s game plan. Last season against the Huskies, the Trojans played Washington tough defensively with Justin Wilcox as the USC DC, so a Pendergast defense may give the Huskies more of a challenge.

What match-up is the most concerning for the Trojans in this game?

GP: My biggest concern right now is the availability of Stevie Tu’ikolovatu in the middle of the Trojan defensive line. This is going to be a classic “big man’s game” and Stevie T has been terrific at the point of attack for USC this year as a guy who takes up a lot of space and is hard to move. The Huskies center, Coleman Shelton, is one of their veteran linemen and it would be great to have the best Trojan nose tackle option out there to go against him all day.

JC: The Washington run offense vs. the USC run defense. While quarterback Jake Browning receives much of the attention, the real heart and soul of the Huskies offense might be the rushing attack, and specifically, Myles Gaskin. The Trojans defense has done a fantastic job against the run as of late, particularly this past weekend against Oregon. Still, The Huskies are on another level in this regard, and it will be interesting to see if USC’s defense is able to rise to the challenge. Whether or not Trojans defensive tackle Stevie Tu’ikolovatu (PCL strain) is able to play on Saturday could be a major factor here.

GK: The match-up that is the most concerning is the Trojans defense against the Washington offense. Although we have discussed the favorables regarding Clancy Pendergast calling the defensive shots, the Washington offense is so balanced and explosive. You could argue that the Huskies offense is the second best offense the Trojans will see this season behind Alabama’s offensive force. If the Trojans continue on their penalty rage and the number of flags are dropped because of defensive issues, the Men of Troy will be in real trouble. We’ll see if the Trojans secondary can handle the extremely quick and swift Washington receivers without committing pass interference calls.

Name a player who will surprise to make an impact.

GP: I’ll say the running ability of Sam Darnold. We’ve seen glimpses of what Sam can do when he tucks the ball and runs, and the talented Washington secondary could provide tight coverage that dictates this even more. I also think there will be some opportunities in this tight game where weather could be a factor so that could lead to more runs as well.

JC: I’ll go with Michael Pittman Jr. The talented freshman has made steady strides throughout the fall. He’s been making his presence felt on special teams for quite awhile now, but I thought he really turned a corner in the victory over Cal at wide receiver with his four-catch outing. A big, strong target who is deceptively fast, I think he could continue to see more opportunities on offense, and I think he’s ready to make the most of them.

GK: I am not sure a particular player will be an impact player, but I do think the Trojans tight ends could have a major effect on the game’s outcome. I could see tight ends Taylor McNamara, Tyler Petite, and Daniel Imatorbhebhe all having a hand in disrupting the Huskies aggressive defense, especially if the Huskies try and double-team JuJu Smith-Schuster. The good news is that Trojans quarterback Sam Darnold does look for the tight ends and has no problem throwing them the pigskin. With the increased roles of the tight ends in recent games, the groundwork has already been laid, which could pay big dividends on Saturday.