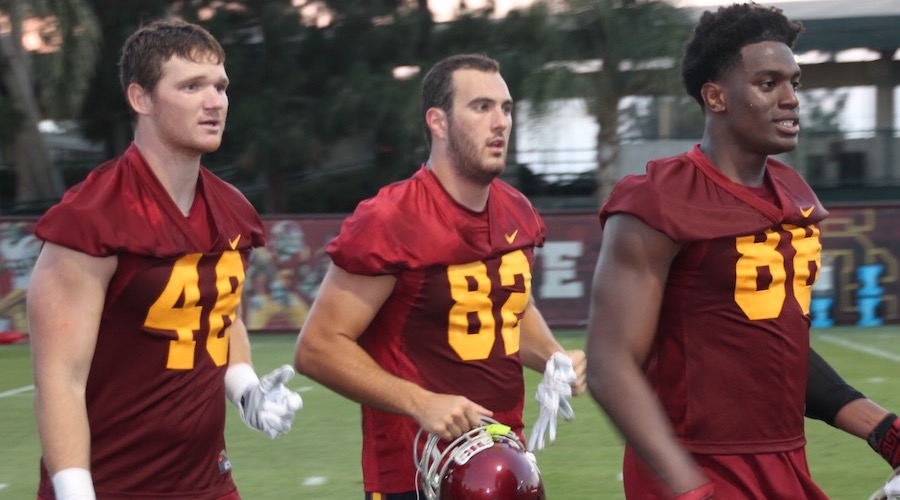 In this week’s edition of the WeAreSC roundtable we look at some of the topics related to the Trojans opener against Alabama:

What match-up do you like in this game for the Trojans?

Garry Paskwietz: I like the match-up of USC defensive coordinator Clancy Pendergast against Alabama offensive coordinator Lane Kiffin. There are two areas I’ll be particularly watching and that is the Trojan pass rush and the play of the corners. With a still-unsettled quarterback situation for the Tide (Trojan fans have seen that before with Kiffin) you have to imagine Pendergast will be looking to bring pressure from many different angles to rattle the QB as much as possible. When they do throw the ball, Pendergast has some very good corners available to help slow the impressive Bama pass catching group.

Johnny Curren: The USC passing defense versus the Alabama passing game. With the starting quarterback job at Alabama still unsettled, Nick Saban recently said that both Cooper Bateman and Blake Barnett are likely to play against the Trojans. And while teams have found success going with two quarterbacks in the past, it doesn’t work out a lot of the time, with Clay Helton, himself, noting that he is not a fan of such a scenario. If the Alabama passers have trouble getting into a rhythm, a USC secondary that features Adoree’ Jackson and Iman Marshall, and that possesses greater depth than once anticipated, has a real opportunity to take advantage of the situation.

Greg Katz: I like the Trojans secondary against the Alabama receivers. Although The Tide has explosive receivers like Calvin Ridley and tight end O.J. Howard, I like the experience and talent of Trojans corners Adoree’ Jackson and Iman Marshall, who should be improved after playing his freshman season. I believe that Alabama offensive coordinator Lane Kiffin will try to specifically exploit the Trojans safeties, and if players like Marvell Tell and Leon McQuay can limit mistakes and if the Trojans defensive front can put pressure enough on whomever the Alabama quarterback, it will greatly improve the Trojans chances for victory.

HelixTrojan: I like the WR vs. DB matchup for the Trojans.  Alabama has very good personnel, especially CB Marlon Humphrey. But when the Trojans play non-conference opponents, the USC passing schemes are a little more sophisticated than what the defense sees normally. JuJu Smith-Schuster will be who the Alabama defense concentrates on, but the Trojans have so many good passing options that I really hope the Max Brown and the offense use the whole field and a variety of receivers in this game.

Which match-up has you concerned?

GP: Just as Alabama will be putting an inexperienced quarterback out there, so will the Trojans, and Max Browne will be facing some Alabama pass rushers that are as good as it gets in college football. 5 of the top 6 sack leaders from Alabama return, and 3 of the players in their front seven (Allen, Williams, Foster) are ranked as the top player at their position on various NFL lists. USC is also going to likely be relying on a new left tackle in Chuma Edoga, a promising player but without the three years of starting experience of Chad Wheeler. A consistent run game will help keep the defense honest from pinning their ears back and coming after Browne.

JC: I’m most concerned about the challenge that the Trojans offensive line will face in Alabama’s defensive front, particularly with the uncertain status of Chad Wheeler, and Chuma Edoga starting in his place at left tackle. The sophomore has shown promise in the past, but this will be an absolutely huge test – particularly when it comes to pass protection. The Crimson Tide led the nation in sacks in 2015, and with players like Tim Williams and Jonathan Allen back, they’re sure to be strong in that regard again. The USC offensive line will need to slow this group down so that Max Browne has time to get in the flow of things. They will also need to do their part in establishing an effective running game from the get-go for USC to have a chance.

GK: I am concerned about the Trojans offensive line matching up against the Alabama defensive front seven. The Trojans offensive line has gotten a lot of positive hyperbole regarding their experience and improvement, but facing Alabama’s NFL talent across the board, including linebackers, will be the ultimate challenge. I am concerned that The Tide will have the more athletic and physical players and that during the course of the game that could be a real factor. With starting left tackle Chad Wheeler either out or limited, one area of concern regarding Wheeler’s possible absence is left tackle. Clay Helton says that sophomore Chuma Edoga can do the job, but Edoga will have his hands full with those great Bama defensive ends.

HT: Matching up with Alabama’s TE OJ Howard is going to be a challenge for the SC linebackers and/or safeties. Howard torched the Clemson defense for over 200 yards in last year’s national championship game. So Howard will be an effective safety valve for the new Crimson Tide quarterback. The Trojans will have to keep an eye on this excellent TE and limit his effectiveness.

GP: The tight ends (photo above) could be Browne’s best friend in this game. The Trojans have a trio of players in Taylor McNamara, Tyler Petite and Daniel Imatorbhebhe who can be effective weapons in the quick passing game, and also with play action. They can also be used to stay in and help with blocking assignments as needed.

JC: The USC tight ends. A unit marked by improved depth and talent, Taylor McNamara, Tyler Petite, Daniel Imatorbhebhe and Cary Angeline form a dangerous group – particularly if fall camp is any indication. A forgotten unit of sorts recent years at USC, they were targeted often throughout camp due, in part, to the arrival of Tyson Helton, who utilized the tight ends frequently as part of the offensive game-plan at Western Kentucky. If that carries over to the game on Saturday it could be something that catches Alabama by surprise.

GK: I think that the Trojans running backs will play an important role in the game in both running the ball and in pass protection, especially when Alabama blitzes. A player like the Trojans Ronald Jones has the capability of breaking some big runs with his speed and quickness, which should be able to overcome a very fast Alabama defense. In Justin Davis, the Trojans have a runner that is willing to run hard between the tackles, which will be important because it will not only be tough to find holes but also take the physical pounding. Since Trojans quarterback Max Browne will probably be under extreme pressure by the Alabama defense, another key will be the ability of the Trojans running backs to receive quick passes and gain positive yards to keep drives alive.

HT: I think that new left tackle Chuma Edoga is going to do a good job against  very good Alabama pass rushers. Edoga is going to start in place of Chad Wheeler, and a lot of Trojan fans are worried that the Crimson Tide will have the advantage. DE Jonathan Allen is the returning sack leader for Alabama, and a good player, so the concern is legitimate. But I think Edoga, who is an excellent athlete, is going to do a fine job protecting Max Browne’s blind side in this game.