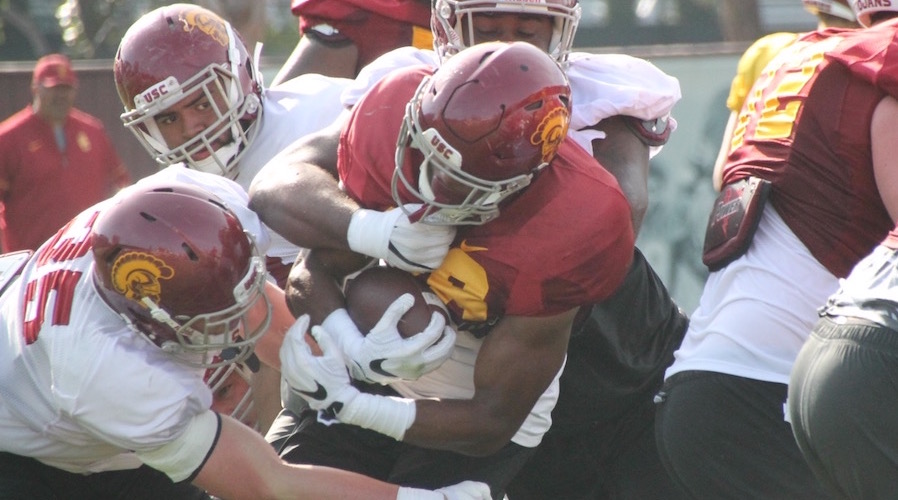 Everyone seems to be pulling in the same direction: There is an often-told story about Pete Carroll taking his team to the Coliseum for their first meeting when he was hired as head coach, to have the team take part in a tug-of-war, with the lesson being that they must pull in the same direction in order to get anywhere. Well, after a period of recent years where it didn’t always feel like things were pulling in the same direction for the USC program, it does feel that way now, and this cannot be understated. There aren’t any distractions or issues, the message is clear from a consistent head coach, and the players have resoundingly bought in (especially after seeing success on the field). The word stability was tossed around a lot when Clay Helton was hired and you can see it in the state of the program right now.

Defense looks comfortable in Year 2 under Clancy: First of all, the defense has a chance to be very good. Helton talked a lot in spring about the importance of having the entire defensive coaching staff return because it meant the players would be hearing the same message, and with so many returning players it meant a lot of experience in the Clancy Pendergast scheme. And as spring went along it became noticeable that the players were playing fast, and that was a direct result of knowing the scheme and a coach who knows how to put those players in the right positions.

Young WR duo steps up: One of the biggest holes coming into spring was at the two outside receiver spots following the departure of JuJu Smith-Schuster and Darreus Rogers. As we exit spring, however, there was a pretty resounding statement made by Michael Pittman and Tyler Vaughns that they are ready to step into those shoes. I don’t think you could have asked for more from either player, they came out and made plays all spring long to earn the praise they received at such an important spot. Helton said at one point that the offense would go as far as the young receivers go, and if that is the case there should be a lot of optimism based on what we saw in spring.

No. 1, this defense has the potential to be really special. Clancy Pendergast’s group was clearly ahead of the offense throughout a majority of the spring, and it’s obvious that the players are ready to take off in the second year in his system. And it wasn’t just the proven veterans like Cameron Smith, Uchenna Nwosu and Chris Hawkins who stood out, but also younger up-and-comers like Jamel Cook, Jack Jones, and Marlon Tuipulotu. It will be interesting to see if their performance this spring carries over into the fall. If it does, opposing offensive coordinators in the Pac-12 are going to have some sleepless nights ahead.

The second biggest takeaway is that there are still a ton of question marks surrounding the offensive line. With players like Toa Lobendahn, Nico Falah, Viane Talamaivao, Nathan Smith and Andrew Vorhees sidelined throughout a majority, if not all, of the spring, it was hard to get a read on just how good this unit is, and just how much they’re going to miss Chad Wheeler, Zach Banner and Damien Mama. With so many players out of action this group was, not surprisingly, inconsistent to say the least.

And finally, the final takeaway I have is that this program appears to be in good shape for the future. I was really impressed with the performance of those younger, lesser-known players on the team. I already mentioned Cook, Jack Jones and Marlon Tuipulotu on the defensive side of the ball, but on the offensive side youngsters like Tyler Vaughns, Michael Pittman Jr., Velus Jones, Vavae Malepeai, Matt Fink and Vorhees also showed tremendous promise. Their performance was a testament not only to the current coaching staff’s ability to recruit, but also to their skill at developing talent.

My first take from spring ball is that I believe the most improved player on the team is backup quarterback Matt Fink. Matt has shown tremendous growth since his arrival as a freshman. No, right now he’s not Sam Darnold, but who is? The fact is that Trojan fans should have confidence if Fink is asked to relieve Darnold in a game or for a game. The former Glendora High star looks relaxed in the pocket and certainly knows the playbook. Like Darnold, he is a threat to running out of the pocket. The exciting aspect for Matt is how much improvement he will make in the future based on what he has accomplished in the past. It’s not inconceivable that he will legitimately challenge for the starting spot when Darnold departs for the NFL.

My second takeaway from spring ball is the defense in general and the offensive line. The 2017 defense could be exceptional and one of the more physical USC defenses we have seen in recent seasons. The defensive line, considered a potential liability last spring, is causing no such trepidation coming off this spring. The inside linebacking situation with Cameron Smith is promising, although inside depth alongside Cam may take a few games to be a real force because of inexperience. The secondary could be a real positive, but replacing all-star corner Adoree’ Jackson could be problematic early in the season. The offensive line we saw in the spring probably won’t be what we see in the fall in terms of who lines up where (Toa Lobendahn, Chris Brown, Roy Hemsley, Nico Falah, etc.). The good news, however, is that a number of past backups and redshirts got valuable reps with all the injuries to those considered probable starters and there is talent. The eventual five starters should be adequate enough or better to make a championship run.

My third takeaway could have been the positive development of the new wide receivers who have talent but lack experience. However, I think the biggest takeaway for me is just how organized and systematic Clay Helton’s program has become and how the coaching staff’s experience and togetherness really shows from where we were last spring. Having the return of Defensive Coordinator Clancy Pendergast is a major factor, and the defense running the same system for the second season in a row really shows in reaction to the ball, which allows for some of the “violent” tackling we saw this spring. I got the sense that everybody on both sides of the ball are on the same page, and everybody is pulling the rope in the same championship direction. In talking with some of the Trojan players during spring, I sense they feel a closeness and understanding of both their coaches and the system. There is a “one heartbeat” mentality.

Offensive Line will be determined in the Fall. Three spots went up for grabs as starters at the two Tackle and Guard positions departed. Unfortunately, due to injuries we didn’t get to see a full- fledged competition for those spots. Toa Lobendahn and Viane Talamaivao were ruled out of Spring, and Nico Falah and Chuma Edoga had issues that they battled through, but were not 100%. The good news – all candidates will return for Fall Camp when we will get answers. More silver linings – several reserves – Roy Hemsley, Chris Brown, Clayton Johnston and Cole Smith – got front line snaps all Spring session that could vault them into the rotation.

Wide Receiver position is in good hands. One of the most pleasant things to see was the emergence of the young players at the wide receiver positions. Michael Pittman and Tyler Vaughns pushed one another, and achieved a higher level of performance by the end of Spring Ball. And Velus Jones opened many eyes with his speed at WR. Add in the return of veteran stalwarts Deontay Burnett and Steven Mitchell in the Fall, and there should be enough dependable targets for QB Sam Darnold to spread the ball around to.

Mr. Brown is the guy at Kicker. SC is rolling with Michael Brown as the new kicker. In fact, there’s a new long snapper, Damon Johnson, pairing up with returning holder, Wyatt Schmidt. If past seasons are any indication, their performance will determine wins or losses in one or two games in 2017.