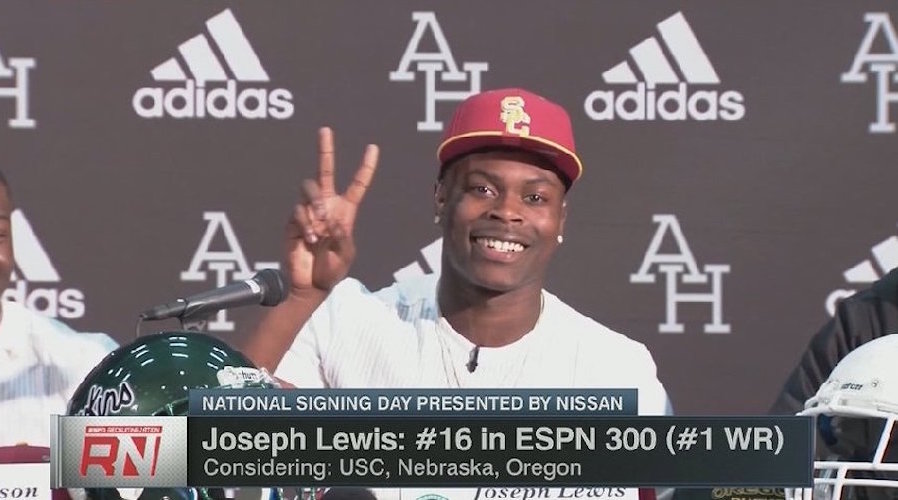 Garry Paskwietz: Marlon Tuipulotu is the first name, he’s the most ready to play and he’ll have the advantage of being here for spring ball. Next I’ll go with Stephen Carr. I don’t know how many touches are going to be there for him in a crowded backfield but he’ll be ready when the opportunity comes. My third choice is going to be Tayler Katoa. I think he’ll be on special teams right away and he could earn a spot in the linebacker rotation as well.

Johnny Curren: Jay Tufele – The Trojans needed help along the interior defensive line, and they landed four talented recruits who can help there, with Tufele serving as the arguable headliner. He has the talent and size to contribute immediately. Marlon Tuipulotu – Another huge score for the Trojans along the interior defensive line who has the physical tools to make an immediate impact. He’ll also have the added advantage of taking part in spring drills. Joseph Lewis – With the loss of JuJu Smith-Schuster, Darreus Rogers, De’Quan Hampton and Isaac Whitney, the Trojans will be looking for some receivers to fill the void, and Lewis, a big-play threat with unique size, just might be ready to do just that.

Greg Katz: Three immediate impact names for me are defensive linemen Marlon Tuipulotu and Jay Tufele and safety Bubba Bolden, although I think you could throw in snapper Damon Johnson because the Trojans need a snapper replacement and Johnson has been put on scholarship.  The Men of Troy needed quality depth help along the defensive line and Tuipulotu and Tufele appear to be the man-child prototypes. As for safety Bubba Bolden, he should fit nicely into the secondary rotation at some point and will be a special teams contributor.

What was the top position group?

GP: I think there’s a good chance this answer is unanimous, and it should be. The defensive line, or more specifically the interior of the defensive line, is a spot that was a key need and the coaches filled it beautifully led by a trio of big, thick, strong Polynesians who should set the tone for the middle of the Trojan defense for years to come. Honorable mention to the OL, which was a very good group in its own right, Trojans got better in the trenches yesterday.

JC: Interior Defensive Line – The Trojans had a major need along the interior defensive line, and they addressed that issue in a major way, scoring Tufele, Tuipulotu, Brandon Pili and Jacob Lichtenstein. All of a sudden the Trojans have a plethora of depth here, not to mention a dramatic uptick in talent. It will be interesting to see what Kenechi Udeze can do with this group.

GK: Top position group is the defensive line. What a group, but the offensive line signees weren’t exactly an afterthought. D-line wise, I don’t see a player that isn’t a good to outstanding prospect for the Trojans needs. It’s hard to recall a deeper more talented defensive line group coming to Troy and a group that is expected contribute early.

HT: Defensive Line – such a large and talented group of prospects that shore up the defensive trenches was needed, but hardly expected.

What was the biggest surprise?

GP: The flip of Tuipulotu from Washington to USC stands alone at the top of the 2017 surprise list. There just weren’t any signs that a flip was coming, and the fact that it came from such a solid DT was just what we needed. I’m also going to mention the signing day verbal from Josh Falo. I think he’s a unique pass catcher and there were times in the process where it didn’t look good for the Trojans to sign him. Very glad that one worked out.

JC: Josh Falo – Up until recently it seemed an almost forgone conclusion that Falo would head to Colorado, and in recent days it appeared as though Oregon was the team to beat. One of the quieter recruits throughout the process, his recent official visit to USC obviously left a lasting impression.

GK: Biggest surprise was the commitment by tight end Josh Falo only because the Trojans are loaded up at tight end. But the kid can play and obviously feels confident that he can compete. It’s also a big indication that the Trojans plan on increasing the tight end role through both formations and receiving schemes.

HT: Marlon Tuipulotu. His surprise official visit, commitment and early enrollment happened so fast that its impact changed the nature of this recruiting class.

GP: For some reason it seems like Joseph Lewis flew under the radar a bit when you consider his lofty recruiting ranking. This is a tall receiver who also has good speed and he fits right in with the Trojan outside receiver group of Pittman, Imatorbhebhe and Vaughns.

JC: Alijah Vera-Tucker – Somewhat overshadowed in this class, I really liked what I saw from him in person at the CIF-State championship game, as well as in the Under Armour All-America Game. Big and physical, he moves surprisingly well for a player his size, and I think he has the potential to develop into a major contributor down the line at either guard or tackle.

GK: The under the radar signee from my point of view is linebacker Tayler Katoa, who was such a standout athlete in Utah. Now that he is settled into one position, I expect great things as his career matures at Troy. Keep any eye on this kid and remember that Lofa Tatupu was also once a high school quarterback like Katoa.