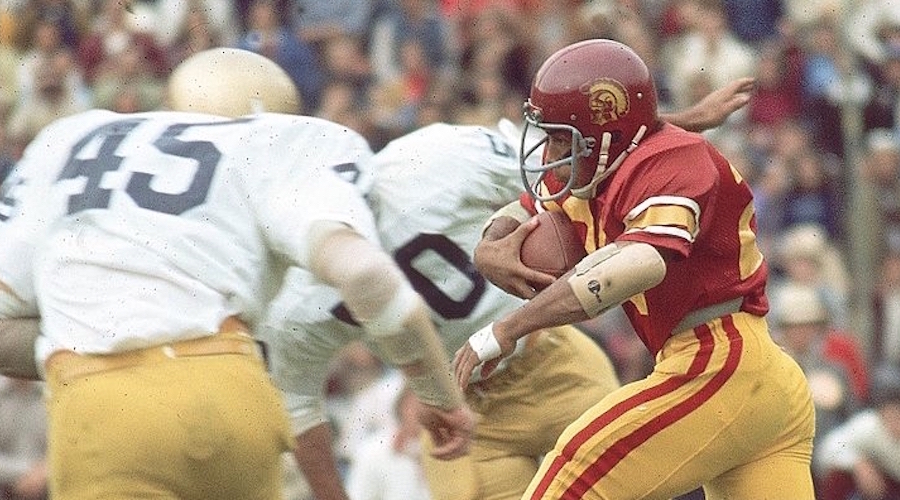 Adoree’ Jackson set the USC career kickoff return mark last week, and has passed such names as Curtis Conway, Reggie Bush, R. Jay Soward, Robert Woods, Anthony Davis and more. Who would you put as the best return man you’ve seen at USC, and why?

It’s hard to leave off any of the names on this list because I would be pretty happy to have any of them returning kicks, but if I have to choose one I will go with Adoree’. It came down to Adoree’ or Reggie Bush for me, and it really came down to pure style points for both guys, because when they returned kicks it was almost as if they were gliding down the field at times. What separates Adoree’ from the others is just how often he seems to break some kind of return, even if he doesn’t take it to the house there is still that “sit on the edge of your seat” element that comes into play whenever he touches the ball. You could make a similar case for any of the names on the list as being must-watch but there is just something about the way Adoree’ does it that stands out to me.

While there are plenty of talented return men who have come through USC, and Adoree’ Jackson obviously deserves to be placed near the top of that list, I’m going to go back to the early 1970’s to go with Anthony Davis as the best ever. Davis was simply on another level when it came to kick returns. He averaged an incredible 40.3 yards per return in 1974. That’s staggering. To put things in perspective, as fantastic a return man as Jackson is – and he most certainly is – he’s averaging 31.2 yards per return this season. Davis also returned six kickoffs for touchdowns in his career, and even more impressive, many of his best returns came against some of USC’s toughest opponents, and at the most crucial of moments – including in the famous 1974 55-24 Trojans comeback victory over Notre Dame. He had a 102-yard kickoff return for a touchdown to begin the second half that completely shifted the momentum of the game in USC’s favor. Because of that, if I had to choose any Trojan to return a kickoff with a big game on the line, I’d go with Davis every time.

Boy, this is a tough question because each of the returners was and is so dangerous and have proved it. I think for pure drama, I would select Anthony Davis because his returns against Notre Dame on more than one occasion are legendary. That being said, I think that as a pure kickoff returner, I would have to give the nod to R.J. Soward, when he had his head on straight and was at the zenith of his collegiate ability. Although Adoree’ Jackson and Curtis Conway are obviously elite, I always had the feeling that Soward could take it back at any time and had the unique blend of speed, quickness, and toughness. I do think that Adoree’ has had the benefit of John Baxter, who may be as good a special teams coach I have seen at USC in my lifetime. Of course, the Trojans, under Baxter, put in much more time on special teams in practice than I have seen in the past. It would have been very interesting to see the others have the benefit of Baxter’s expertise and practice time in their careers.

USC has had a distinguished list of return men in its history.  And kickoff and punt returning is just as much of an art form, as it is a skill.

Not every player has the skill set or courage (especially on punt returns) to be a return man. So picking the best in Trojan history is not as easy as one might think.

So first, I have to exclude Adoree Jackson from consideration because his career is not over yet. He will most certainly add to his accolades and statistics as the year progresses, and may be at the top when he is done.

But of the rest . . .  Anthony Davis probably had the most impactful returns when you consider his Notre Dame (6) touchdowns (all on kickoff returns). Curtis Conway’s return style reminded one of kids playing football in the park. And who can forget the USC fans chanting Reggie Bush’s name in unison before each return opportunity.

However, the best combination kickoff and punt returner in my opinion was R Jay Soward.

It is easy to forget about Soward’s exploits as a returner  . . . but he was as good as SC has ever had.