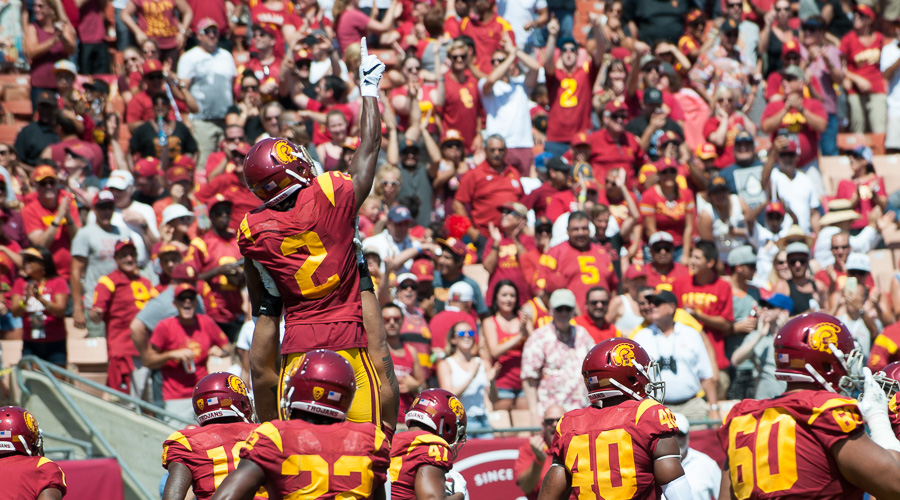 Clay Helton has talked about getting better each week and taking the next steps. What is the next step you would like to see from the Trojans this weekend against Colorado.

I think there is still a step forward that can be taken with the Trojans offensive line, and if that happens it could really help bring together all the elements of the offense. Sam Darnold has come in and provided a lift that has impact the entire offense but we still aren’t seeing the physical nature of play from the line that many hoped to see from such a veteran group. Perhaps it’s a matter of things getting settled, as Chad Wheeler was hampered early with plantar fasciitis in his foot and Nico Falah is still a relatively new starter at center after taking over for the injured Toa Lobendahn. And the group is still adjusting to a new position coach, their 5th in 5 years. None of that will get the group much sympathy as we reach the midway point of the season, it’s a matter of seeing the improved results on the field.

First, to build upon the momentum that the Trojans seized this past weekend -making sure that their performance against Arizona State doesn’t represent a one-game fluke, but instead, a return to Trojan football. That means ensuring that they don’t have a relapse of the mental mistakes and assignment breakdowns that plagued them through the first month of the season.

On offense, I think the unit’s identity is really starting to take shape, and I’d like to see them continue to develop that. The passing game is obviously in good hands under Darnold, who has done a fantastic job of spreading the ball around to his different weapons, including JuJu Smith-Schuster. In terms of the rushing attack, I think Justin Davis has established himself as the go-to guy, and I believe he deserves to get somewhere in the neighborhood of 20 carries this week against Colorado. A tough, no-nonsense ball carrier who does everything well, the ground attack has really clicked when he’s in there. And while the offensive line has shown some improvement, they still have a ways to go, so they definitely need to continue to grow – particularly in terms of becoming the most physical group they can be.

Defensively, Clancy Pendergast did a nice job last weekend of coming up with a scheme that allowed his group to get some real pressure on the quarterback, and I’d like to see this unit continue to bring the heat from all over the field. Up front, I was particularly impressed with the improvement defensive tackle Rasheem Green showed against Arizona State. Hopefully he, as well as everyone else on the defensive side of the ball, can continue to make strides, and to come together as one cohesive unit.

To begin with, I’d first like to see the Trojans offense continue to play error and turnover free football with emphasis on offensive line improvement, as it pertains to technique, dominance, and – most importantly – finishing blocks. Sticking with the offensive theme, Clay Helton said he would like to get senior tailback Justin Davis 20-25 “touches” a game. Last game against ASU, the number of touches for Davis was 14 carries and two receptions for a total of 16 touches. I’d like to see Davis get at least 20 carries, which would open up more play-action options. With a quarterback of Sam Darnold’s ability to spread the pass around through the air, more play-action would make Darnold an even more dangerous weapon not only with his pinpoint passing but the option of his dangerous legs.

Defensively, I would like to see the same type of aggressiveness in Clancy Pendergast’s game planning that we saw against ASU, which means more blitzes from all angles and more inside creativity along the defensive line. I’d like to see continued growth in the communication in the secondary, so that we don’t see the type of breakdowns that were evident in past losses. On both sides of the ball, I’d like to see improvement in holding penalties down to a minimum.

I think that if there is a buzz word that represents the next step for SC going forward it is . . . consistency.

We’ve seen baby steps in the right direction, both offensively and defensively, as the schedule has gotten a little easier.

But there is a long way to go.

I want to see the running game continue to be the foundation as the offensive line gets better, and RB Justin Davis has emerged in the last couple of games. QB Sam Darnold’s running ability has been utilized, and needs to continue to be a staple in the offense.

But the 3rd down efficiency, ranked 11th in the conference at only a 36% conversion rate, needs to consistently get better to increase time of possession.

But now against a high scoring Colorado offense, the Trojan defense will have to continue to produce a pass rush that will help the pass defense.

Good teams don’t beat themselves. And a primary objective for the Trojans the rest of the season is not to beat themselves by lowering their penalties and taking care of the football.

Achieving this basic goal will help the consistency of the offensive and defensive performance.