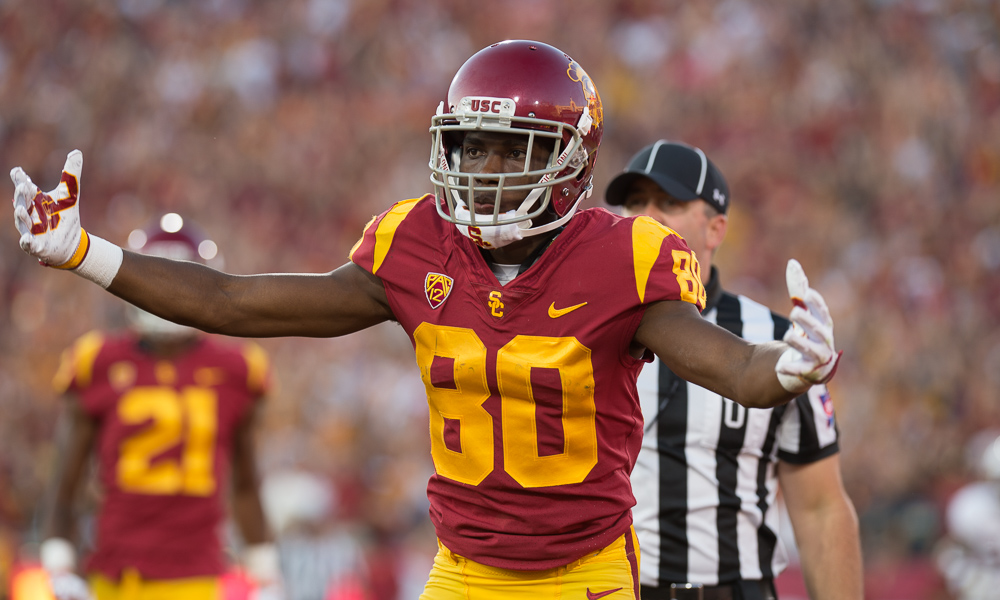 With a week left to go before draft eligible players have to make their intentions known, the Trojans have already suffered a pair of big losses with Sam Darnold and Ronald Jones moving on to the next level, and rumblings of Deontay Burnett giving serious consideration as well.

EDIT: Deontay announced Monday afternoon that he would be leaving for the NFL

To God Be the Glory.. pic.twitter.com/LRyKPzlPQW

The departures of Darnold and Jones were expected, even while hoping for different decisions, but the Burnett one doesn’t seem as obvious. Sure, Deontay has been terrific in his USC career from a blueshirt to dependable leading receiver, but you don’t get the sense the NFL is banging down his door looking for him to come out (and that was shown in his draft evaluation from the league). Because for all of his football instinct and savvy, Deontay is roughly 170 pounds, and that has to come into the thought process when playing at that level. It could also come into play now, Deontay has taken plenty of hits on 152 catches over the past three years and it may be time to start getting paid for those hits. But I can make a strong case for him to come back, to be a captain for very good USC team and to make a run at Robert Wood’s career mark of 252, he would need a tall order 100 catches (especially with two other productive receivers in Vaughns and Pittman along with the arrival of Amon-Ra St. Brown, all while breaking in a new quarterback) but it’s not an out of reach number either.

The good news is that the rumors for the other players like Rasheem Green, Cameron Smith and Iman Marshall are all that they are going to stay, and that would certainly be welcome news for the USC defense.

The other variable that we should know by January 15th is if any current USC players are transferring. We continue to hear that it’s possible but you never know at this time of year.

Once we know that those two numbers, who is leaving for the NFL or to other schools, then we will know the final number of available spots for the incoming recruiting class.

In the meantime we will project the number at 18.

During the early signing period the Trojans signed 10 players, 9 from HS and 1 from junior college.

There are currently 5 players who have given verbal commitments to the Trojans with expectations to sign in February:

With 10 players signed and 5 more committed, that would leave only 3 open spots if the projected number of 18 ends up being accurate.

Here are some of the top remaining players on the wish list who are still unsigned: