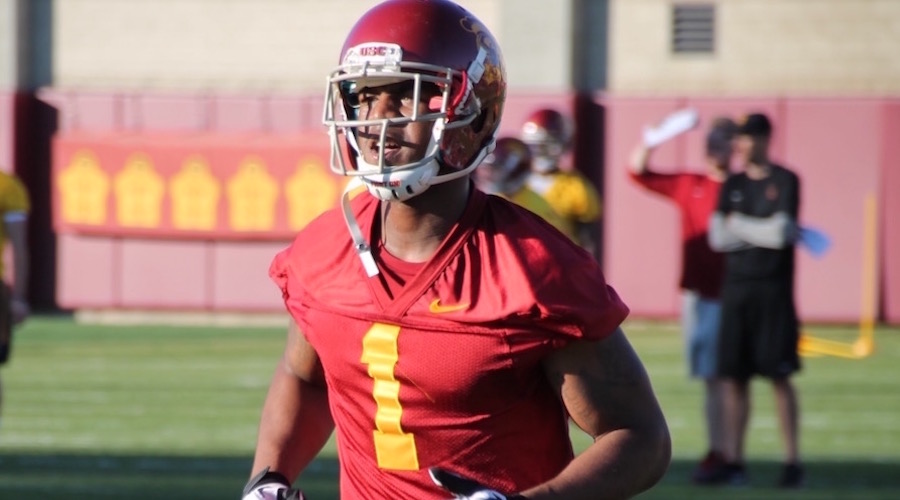 “I’m like, ‘wow, it all went by so fast,’” said Rogers, who has made 71 receptions in his Trojans career for 791 yards and seven touchdowns. “Every day I look at it like I will never get another spring at USC, so I try to come out with the right attitude, and to try to make at least one great catch a day.”

So far, Rogers has made good on his goal. Picking up where he left off over the final half of the 2015 campaign, the 6-foot-1, 215-pound wide out has been performing at a consistently high level through the early goings of the spring.

But it isn’t just Rogers’ performance that has been grabbing peoples’ attention, but surprisingly, also his newfound voice, as he’s taken on a leadership role for the first time. Somewhat reserved by nature, the Carson (Calif.) product can now often be found helping to lead the members of the USC wide receiver corps through their drills each day, while paying special attention to the younger players, especially early-entrant freshmen Josh Imatorbhebhe and Michael Pittman.

“That’s one thing I wanted to add to my game next year, is being more vocal out here,” Rogers said. “I’m kind of a quiet guy, and I try not to talk a lot, but to help the team be its best, I have to come out here and speak up and be a leader for the young guys.”

“He hasn’t been one to speak up a whole lot since he’s been here, but he’s earned that role now as the elder statesman, if you will, in the room,” Martin said. “And the guys respect him because they see him putting in the work, and they see a consistent player. And that’s what I think he’s done a great job of this spring – coming in here with a focused attitude, knowing it’s his senior year, and he’s been consistent.”

Part of a talented Trojans wide receiver unit that also includes 2015 All-Pac-12 first-teamer JuJu Smith-Schuster, as well as Steven Mitchell Jr., Isaac Whitney, De’Quan Hampton, Deontay Burnett and Ajene Harris, with two-way star Adoree’ Jackson set to return to the group in time for the fall, and three more Class of 2016 signees scheduled to be added to the fray this summer, Rogers’ leadership and potential uptick in production figures to bode well for the unit as a whole.

But will Rogers receive the chance to become an integral component of the USC offense? Running exclusively with the No. 1 group throughout the spring so far, he’s certainly on pace to start, just as he did in 11 games for the Trojans last season. When it comes to the strategy of the USC passing offense, however, the trend in recent years has been to primarily target one wide receiver, as was the case this past fall when Smith-Schuster caught 89 passes – more than double the 37 receptions that the No. 2 receiver, Mitchell, had, and over three times the amount that Rogers, the No. 3 pass-catcher, compiled with 28. But with Clay Helton having taken over as the team’s permanent head coach, and Martin now calling plays on offense, Rogers has seen evidence of a change in philosophy this spring.

“The ball is going around to everybody,” Rogers said. “I’m the kind of guy who isn’t stingy. If the guy makes the play, I’m happy. To come out with the ‘W’ is great. But I am getting a lot more touches this spring. Everybody is. We have a production chart inside the meeting room, and everybody’s catch-rate is about the same, so it’s looking good.”

And that isn’t the only difference that has lifted Rogers’ spirits this spring. There has also been a noticeable increase in the number of passes thrown down the field.

When Martin does make those calls in the fall, Rogers certainly appears poised to come through for the Trojans. And having emerged as a veteran leader this spring after finding his voice, what’s even better is that there is reason to believe that everyone around him will follow suit.