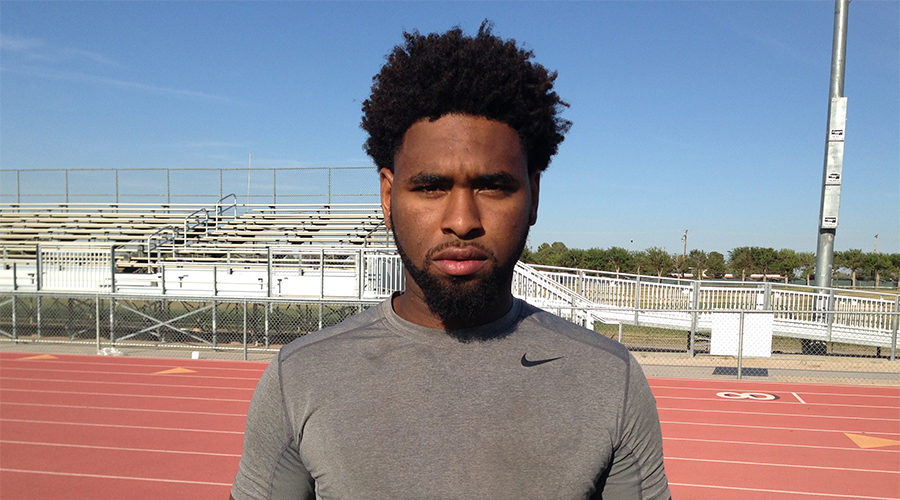 With the arrival of the May evaluation period, a throng of college coaches have made their way to Lancaster (Calif.) Antelope Valley over the course of the last two weeks, with Class of 2017 two-way standout Moses Robinson-Carr serving as the main attraction as he goes through spring drills with his team.

“A lot of coaches have been coming out – every day about four or five it seems like,” Robinson-Carr said. “Texas A&M, Oregon, USC, UCLA…a whole list of them. It’s very exciting not only for me, but also for my boys so they can get some exposure.”

With the combination of talents that Robinson-Carr brings to the table, it’s no wonder that 10 programs have already come through with an offer – including USC.

An outstanding athlete with 6-foot-5, 250-pound size, he caught 50 passes for 656 yards and eight touchdowns over the last two seasons, while also making a huge impact along the defensive line as well as on special teams.

“Three years ago when I took over the program, he’s the kid I dreamed about having,” said Antelope Valley head coach Ron Wilson. “He’s a threat. We put him in a three-point stance, he goes from a two-point stance, H-back in the backfield, and we flex him out – he takes ownership of the tight end position. He doesn’t want to come off the field, and he starts on both sides of the ball for us. He starts at defensive end, D-tackle, tight end and receiver. He starts on all the special teams – he goes down on kickoff, he blocks for us on kick-returns, and he helps on punt team. So, he’s the guy.”

While Robinson-Carr is receiving some limited interest to play on the defensive side of the ball, the vast majority of the programs out there are coming after him as a tight end, which is also where he’d prefer to play on the next level.

And while he’s known by some for his exploits as a talented pass-catcher, what makes Robinson-Carr somewhat of a rarity as a tight end prospect – particularly with the proliferation of today’s spread-it-out, passing offensive systems – is that he’s just as talented a blocker. In fact, it’s the aspect of his game that he takes the most pride in.

“I love blocking,” Robinson-Carr said. “I love being able to get a chance to get my hands on somebody. And when it comes to catching the ball, I can also get that job done.”

In search of a pro-style tight end with Robinson-Carr’s skill-set, USC extended an offer his way in early March.

“Just coming off of some smaller offers, SC offering me was really great for me because it was such a big offer, them being in L.A. and everything,” Robinson-Carr said. ”It was just amazing getting that.”

Since that point in time, the USC coaching staff has been in steady contact with Robinson-Carr, with Trojans assistant Tyson Helton taking the lead. Among the coaches who have already stopped through the Antelope Valley campus this spring, he’s developed a solid relationship with the standout tight end prospect in a short period of time.

“Just talking to Coach Helton, we have a good connection,” Robinson-Carr said. “We talk about things on the daily – and not just about football. We talk about how my days are going, practice, and how spring practice is going. Building that connection has been awesome.”

Robinson-Carr received the opportunity to meet the entire staff at USC in person a little less than two months ago when he took in a day of spring ball on campus. Still extremely new to the entire recruiting process at the time, it’s safe to say that he came away from the experience impressed.

“That was my first unofficial visit anywhere,” Robinson-Carr said. “Everything was new and great because I had never checked out a practice at any school. It really opened my eyes to see what college is about, and to see how a practice is run.”

Robinson-Carr paid special attention to the tight ends at practice, and through his observations, as well as his discussions with Helton, he believes that he would make a nice fit in the USC offense.

“They’re putting in a new offense that uses a versatile tight end who can block, catch the ball and also block in the backfield,” Robinson-Carr said. “I feel like I can do all of that.”

But when it comes to the race for Robinson-Carr’s signature, the Trojans still have plenty of competition. He followed up his trip to USC with unofficial visits to Oregon, Oregon State, and UCLA, with each coaching staff leaving a positive impression, and he’s still completely open to all comers at this early stage of the process.

Determined not to rush into anything, he plans to wait until sometime in the fall to make his decision.

“I’m just taking everything in and going through the recruiting process with my coach,” Robinson-Carr said. “What I’m looking for is a place that I can fit in for four years when it comes to school life and on the football side. A place that’s family-oriented, and a school where I’m really wanted.”

His summer plans still open, Robinson-Carr has discussed taking some more unofficial visits in the coming months with his coaches at Antelope Valley, with Fresno State and Wyoming among the potential destinations.