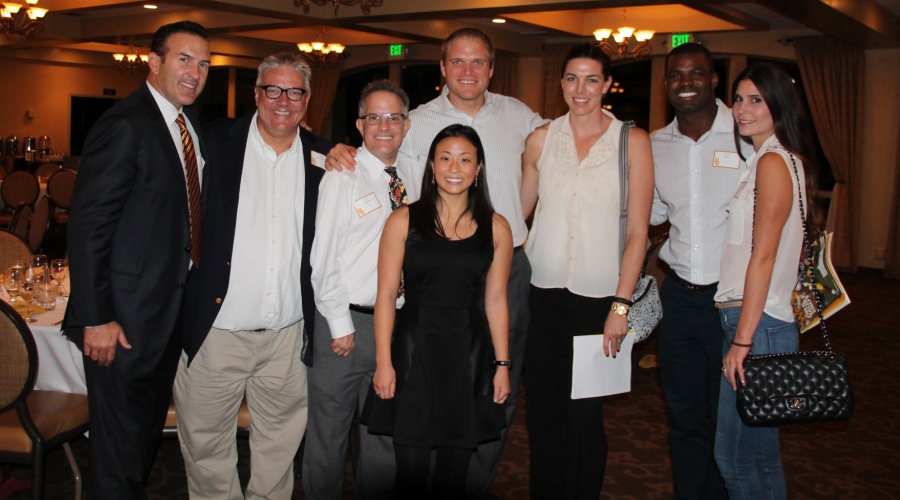 The first speaker of the evening, brought to the stage by emcee Shane Foley, was USC senior associate athletic director Dr. Magdi El Shahawy, who heads up the student-athlete academic services department and also serves as program administrator for men’s volleyball and the track & field program.

El Shahawy shared some of the impressive academic numbers that have been posted recently by the USC football program and the Trojan student-athletes in general.

The entire athletic department had a 3.0 GPA for the spring semester, the highest since data has been tracked in the early 1990’s. Also in the spring, 55% of the student-athletes had a 3.0 GPA or higher, an all-time best at USC, and 143 were on the Dean’s List (representing 26% of student body total).

The next speaker was diver Haley Ishimatsu, who recently graduated with an impressive resume.

Ishimatsu was a two-time NCAA champion, four-time Pac-12 champion and four-time All-American. She graduated with a 3.73 GPA in sociology with a minor in forensics and criminality. Ishimatsu took part in the 2008 Olympics and was named the 2015 Pac-12 Women’s Swimming and Diving Scholar-Athlete of the Year.

Haley is currently working as a research assistant with a goal of continuing her graduate school work and eventually entering a career in the federal forensics field. She said she is done with diving as a competitor but still spends time around the USC program where her sister is an assistant coach.

One funny moment came when Haley was asked if she holds her breath during a dive as she is on her way to the water, she thought for a moment and said “I don’t know, I’ve never thought about that before”.

The next speaker was two-time USC captain offensive lineman Jeff Byers, who came to USC after a high school career where he was named the Gatorade National Player of the Year.

Byers talked about his process of choosing a school, where his dad advised him to make a spread sheet, because he said you will only remember the good things about each visit to a school, and the things that were important to you as an 18-year old may not be as important to you in the future. Byers said, as it turned out, the school he loved (USC) happened to be the one with the most boxes checked off on the spread sheet.

Jeff talked about the importance of academics, which really came into focus after he suffered hip and back injuries that cost him the 2005 and 2006 seasons. He said “I was down, but I made the decision that I wanted to get the most out of my scholarship as possible, so I went to Magdi El Shahawy and we mapped out a plan for me to graduate in 3 years”. Not only did he graduate, but he ended up with a sixth year of eligibility, which allowed him complete a master’s degree in business as well.

Byers ended up playing four years in the NFL and started seven games but once he injured his foot in 2013 he knew it was time for his football career to end and begin the transition to the business world. He said “I had fulfilled my dream of playing in the NFL but I also knew football was just one stop on my bus ride”.

Byers now works in the financial field, originally with Wells Fargo in Colorado but now with a group in Orange County that includes several Trojans, after he showed them a business plan for a venture he wanted to start and they quickly jumped on board with his vision.

He said one main thing he took from his time at USC, besides meeting his wife, a former Trojan volleyball player, was the optimism from Pete Carroll, “the fact that Pete believed every word he said, that you control your attitude and winning is part of a culture and you need to learn how to deal with other people to make that happen.”

The next speaker was Keith Rivers, who came to USC from Florida as one of the top-ranked recruits in the nation.

Rivers said he knew USC was the place for him when he came to a summer camp, and felt so comfortable on campus. At the camp, he had a chance to meet with guys like Mike Williams and Tom Malone, who had both just come back from the Playboy All-American photo shoot, and they sold him on how much USC wanted him.

Keith was told by USC assistant Lane Kiffin, “we’ve got this guy Matt Grootegoed, he’s 5-11, about 205 and he can’t put on any weight” and he thought I could move into the line-up right away. Keith said, “then I watched some film of Groots when he was in high school, turns out he was one of the best players ever from Southern California, he’s playing a game with the stripes coming off his helmet, going both ways, that’s when I knew he was a pretty good player”.

Rivers, who wore the legendary linebacker number 55 for the Trojans, got an indoctrination into what the jersey number meant when he gave a less than stellar effort during a USC practice and Lofa Tatupu told him “you can’t be doing that, those 5’s mean too much around here”.

He also talked about the special feeling of playing in the Coliseum, “I wish I could play one more time in the Coliseum, it’s the most special place in the world”, and about how he would talk to guys in the NFL about how they felt coming into the Trojans home stadium, “there’s never been a time when I talked to a guy who said he wasn’t scared to play in the Coliseum, they would hear us banging on the walls, the click-clack of our cleats coming down the tunnel, we’re chanting “War Time”, they knew it was time to get beat down.”

Keith retired from the NFL last year and said he is looking forward to the next chapter in his life, “I feel like I just sold my first business, and now I’m getting ready to start my second one”.

Thanks to SGVTC president Sean Kennally for his efforts to put on another great event.