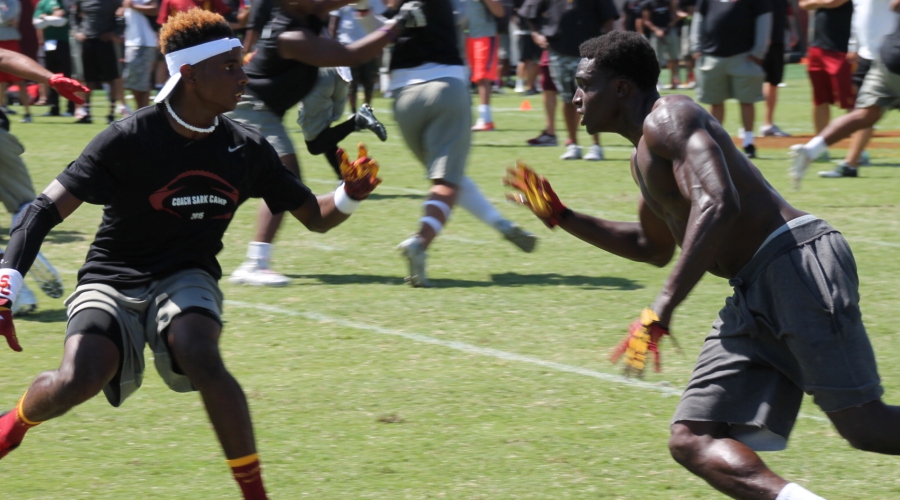 A loaded camp, as expected, although a few of the SC commits did not take part this morning and will presumably go in the afternoon.

* Matt Fink was there but the QB who went with the first group in the team drills at the end of the session was Tua Tagovailoa, who had a couple very nice deep balls. Fink was fine, nothing bad, but Tua just stood out more and it was the best I’ve seen him look at one of these camps.

* Najee Harris was a surprise attendee and it was good to see him there but Stephen Carr did everything well from the drills to catching the ball out of the backfield. Hard to believe they are both only 2017 kids.

* Josh Imatorbhebhe arrived midway through the session and did not take part. Velus Jones was there, he’s fast and runs good routes but I didn’t really see him do anything in the team drills. Javon McKinley was there but not dressed.

* No Devin Asiasi this morning but the interesting news was a Bryce Dixon sighting, he wasn’t working the camp (several other USC players were working) but Bryce showed up and got plenty of love from Trojan players and coaches.

* Frank Martin was at right tackle with the first group. 2017 Wyatt Davis was also there, as was Alabama commit Netori Johnson.

* Daelin Hayes got work at rush end and looked comfortable in that role.

* Jordan Iosefa was working at ILB in the team drills at the end but looked to be limping as he was leaving the field at the end, not sure of his status for afternoon session. Mique Juarez showed up midway through and did not take part.

* C.J. Pollard showed up late so we should see him this afternoon. I liked Nigel Knott, pretty active.

Not as much overall talent in the afternoon as there was in the morning, as several SC commits took part in the morning session and then sat out the afternoon. There was no Matt Fink, Stephen Carr, Velus Jones, Frank Martin, Daelin Hayes or Jordan Iosefa but we did get our first on-field look at Josh Imatorbhebhe and he did not disappoint.

Josh had showed up midway through the morning session along with his brother Daniel, who confirmed that he would be joining Josh at USC as a tight end who will be eligible in 2016. Josh is a pretty thick receiver and he definitely has a competitive streak on the field. We also saw Tyler Vaughns, who performed as Tyler usually does, which is to say he did well.

Melquise Stovall also made an afternoon appearance and worked out at both corner and receiver. I still like him more on offense but there’s little doubt he could flip over and play defense if needed.

Austin Jackson, a 2017 OT from Arizona, was impressive with a frame that should grow well. Austin received an offer from the Trojans and it’s no great surprise after what we saw today.

Another 2017 offer went out to Thomas Graham after the morning session. Graham has been a standout on the 7-on-7 circuit this spring. Speaking of 2017 players, Amari Rodgers is the son of Tee Martin and he can play.

C.J. Pollard was there in the afternoon and he looked good, I also continued to be impressed with Nigel Knott, the kid has game.

Mique Juarez did not take part in any drills and left midway through the afternoon session, he was there to say hello to the coaches and take his 3rd tour of campus.