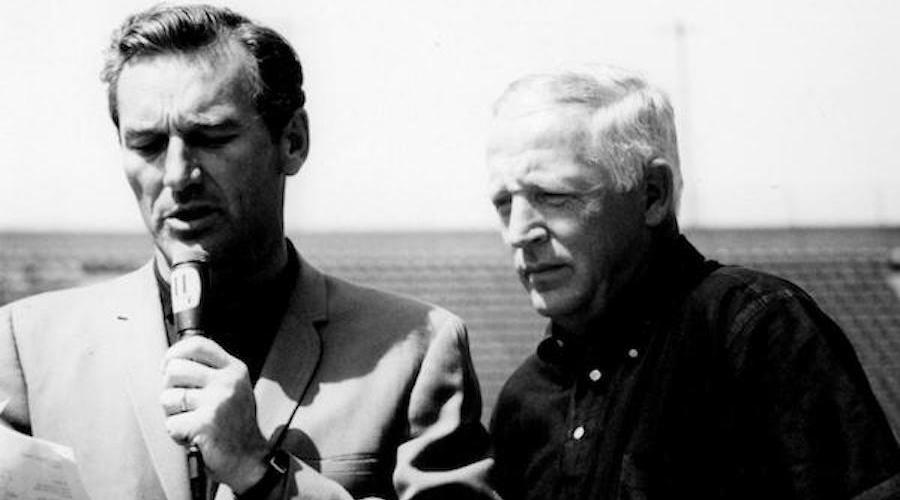 The Trojan Family lost a great one today.

Tom Kelly, the legendary Voice of the Trojans for over 40 years, passed away this morning after battling multiple health issues in recent years. Kelly was 88 years old.

For many USC fans, Kelly and his unmistakably booming voice were the soundtrack of the John McKay era, with Kelly rightfully taking his spot during those years alongside such Los Angeles broadcasting luminaries as Vin Scully and Chick Hearn.

TK represented a different time in broadcasting, an old-school storyteller who could hold court with the best of them, with many of those stories involving a 60-year career of working with everyone from Ronald Reagan to Bob Hope to his longtime on-air USC partner Craig Fertig.

There were his memorable calls, from his trademark “Oh mercy nurse” or “He’s quicker than rent”, to the infamous quote during the 2nd half kickoff of the 1974 USC vs Notre Dame game where he announced that “….it’s been an Irish afternoon….” as the Trojans began an epic comeback for the ages.

For this USC fan, one of the many who grew up with Kelly’s voice as the soundtrack of my Trojans, it was a great pleasure many years ago to have the opportunity to work with Kelly as his analyst for two years (2007-08) on early internet broadcasts of high school football. It was a far cry from the heights of the industry that he had once worked, but he still got a kick out of getting to watch talented players like Matt Barkley and Aaron Corp. As for me, it was just an absolute treat to be able to work alongside him in that setting, as good of a professional experience as I’ve ever had.

I will miss seeing TK in the USC press box at home games. The photo at the top of this story is from 2014 when Tom got to sit in for a few minutes during the Trojan radio broadcast of the Notre Dame game. It was one of the few appearances he made in the last couple years as his health began to really fail. But even as it was clear he was struggling, there was no mistaking that voice, or the crowd that would usually gather around him from those looking to spend a few minutes in his presence.

God love ya Tom. Say hello to Coach McKay and Fertig at Julie’s today. You will be missed.