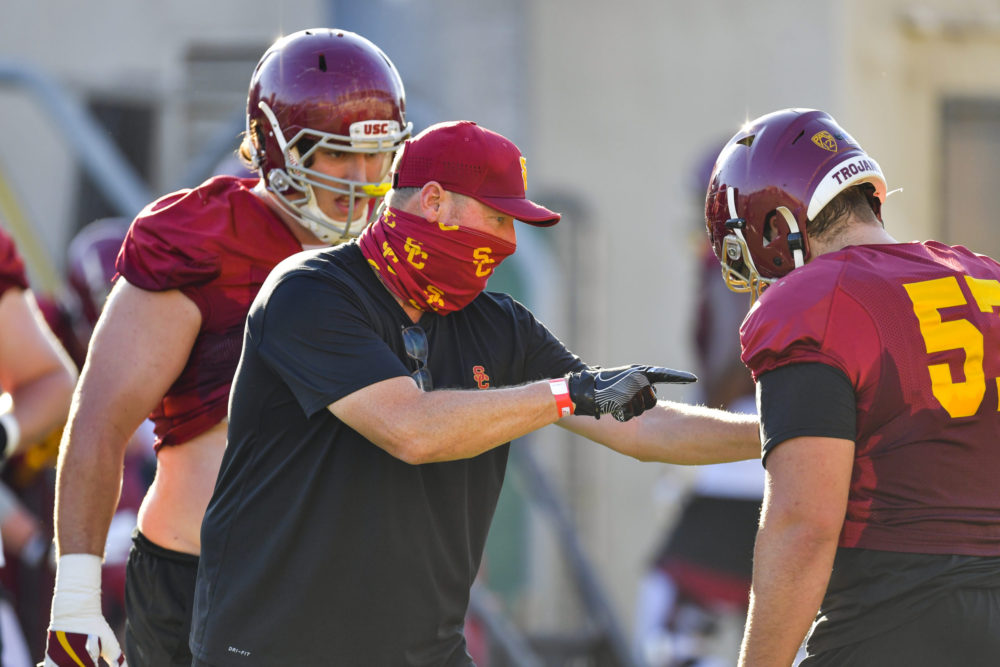 Another offseason will bring another round of coaching changes at USC, as the Trojans have parted ways with offensive line coach Tim Drevno and strength and conditioning coach Aaron Ausmus, according to multiple reports.

Despite having a potential first-round pick at left tackle and bringing back five veteran players across the line, the USC offensive line struggled this season as it paved the way for just 3.2 yards per carry and allowed 15 sacks in just six games.

Drevno is well-regarded as a teacher of offensive line technique, but was unfamiliar with Graham Harrell’s version of the Air Raid when Harrell took over before the 2019 season and needed to learn it on the fly as he was instructing his players. During the 2019 and 2020 seasons, it was evident that something just didn’t click with the run game, as USC rushed for just 118 yards per game in 2019, then only 97 yards per game in 2020. This is a Harrell offense that head coach Clay Helton praised for putting up nearly 2,000 rushing yards at North Texas in the 2018 season. Helton added before the season that he’d like to see USC pair an elite passing game with around 165 rushing yards per game.

It’s really difficult to place all the blame at the feet of Drevno for USC’s difficulties in developing a ground game, but Helton and the Trojans will now go a different direction when it comes to an offensive line coach. It will be very interesting to watch what direction that search takes them, and how much emphasis is placed on a familiarity with Harrell’s version of the Air Raid offense as a requirement for the position.

The new coach will need to find some answers quickly, as the Trojans will be without standout left tackle Alijah Vera-Tucker next season. There are still some pieces to work with, as USC will have guard Andrew Vorhees, center Brett Neilon, right tackle Jalen McKenzie and top backups Justin Dedich and Liam Douglass returning. Starting right guard Liam Jimmons could opt to return for a second senior season as well. And the six true freshmen signed in the 2020 class — including Courtland Ford and Johnah Monheim, who played last season — will be in their second years. It will also be worth keeping on eye on whether the new coach will be able to bring over a potential ready-to-go replacement at left tackle in the form of a transfer.

Aaron Ausmus did Drevno one better, as he was actually in his third go-round with the Trojans. He served as an assistant strength coach with the Trojans from 2001-2003 and USC’s head strength and conditioning coach from 2010 through 2013. He returned to USC in the spring of 2019.

Ausmus helped lead the Trojans through this pandemic-affected off-season, which severely altered what the strength staff could expect of the players and what kind of results could be produced. Ausmus was not working as a college strength coach when Helton hired him last year.

It’s redundant to say at this point, but here’s another interesting impending hire. USC coaches and players have spoken at length about changing the culture, establishing a new culture, building a culture, at USC and the weight room is often times Ground Zero for that. The eventual hire here could say a lot about the direction USC wants to take this program in and how serious the Trojans are about truly competing on a national level.

Note: According to Ryan Kartje of the LA Times, Drevno was let go while Ausmus’ contract expired and USC elected not to renew it.