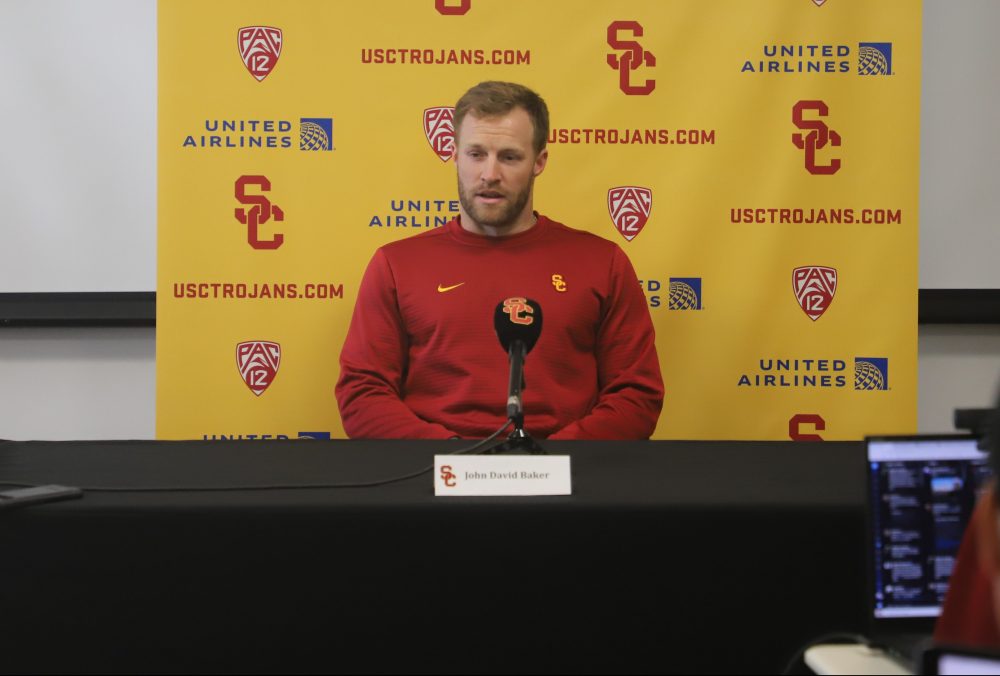 USC is likely to have at least one more assistant coaching move to make this offseason, as reports surfaced Friday that Ole Miss is set to hire USC tight ends coach John David Baker to the same role with the Rebels.

ESPN’s Adam Rittenberg was the first to report the impending hire, as Ole Miss needs to replace former tight ends coach Joe Jon Finley, who moved on to Oklahoma.

It’s an interesting development for USC, as Baker came to USC along with offensive coordinator Graham Harrell from North Texas. After one year in an analyst role, Baker was named the tight ends coach for the 2020 season. A big part of the reasoning seemed to be how connected he was with Harrell and how well he knew this version of the Air Raid offense Harrell wanted to run.

USC already had one assistant coaching move to make, as offensive line coach Tim Drevno was let go and will reportedly be replaced by former Washington State and Texas State offensive line coach Clay McGuire. Again, McGuire’s familiarity with the Air Raid and Harrell is seen as a reason why the hire makes sense.

How USC replaces Baker will be very interesting. USC hasn’t gotten much out of the position in this offense. The tight ends caught just 15 passes in 2019 and 11 passes in a shortened 2020 season. It’s clear that Harrell wants to use this position more in the passing game as big receivers, but striking that balance of getting this group heavily involved has been difficult due to injuries as well as the development of Drake London, who was used as something of a hybrid tight end/receiver.

USC could bring in another dedicated tight ends coach or go a different way, allowing a graduate assistant to handle the position. But the Trojans certainly can’t abandon the position altogether, as there is some real talent to work with here, whether or not Erik Krommenhoek and Josh Falo return for the extra year of eligibility. USC will have Jude Wolfe back and should hopefully be able to finally see Ethan Rae on the field as he continues to battle back from injury. The Trojans also just signed two dynamic tight ends in the 2021 recruiting class, in Michael Trigg and Lake McRee.

With Sean Snyder solely devoted to special teams, there will be an imbalance between offensive and defense in splitting the other nine assistants. Last season, the Trojans went with five offensive assistants and four defensive. With head coach Clay Helton having a background on the offensive side of the ball, replacing Baker with another tight ends coach would again skew things to that side of the ball.

That being said, the four defensive coaches more than held their own last season, as the Trojans improved overall and there was some obvious growth and far more playmaking than in the 2019 season. But an interesting aspect of the defense is that defensive coordinator Todd Orlando also coaches the entire linebacker group, and there are two former USC linebackers on staff who might be ready to take on the challenge of becoming a first-time assistant coach at this level, in Chris Claiborne and Michael Hutchings.