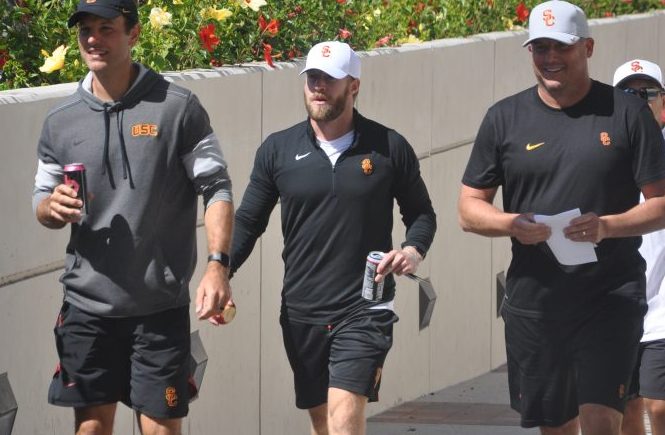 It looks as though Team Texas will be even more prominent for USC next season, as offensive coordinator Graham Harrell will have some added support from a familiar face.

According to a report from FootballScoop.com, USC will promote John David Baker to inside receivers/tight ends coach for the 2020 season.

Baker is very close with Harrell, and previously made the move to USC from North Texas with him. Baker served as an offensive quality control analyst along with Seth Doege for the Trojans in 2018. Those three–Baker, Doege and Harrell–help make up “Team Texas” for the Trojans, as all three prepped in Texas.

Baker was referred to as Harrell’s “right hand man” while the two worked together at North Texas, and the comfort level between the two is obvious. It’s not unusual in an Air Raid offense to have two wide receivers coaches–one for inside receivers and one for outside–and it appears this will be the path the Trojans will take moving forward. It’s interesting that it appears as though USC will bundle the tight ends with the inside receivers, at least when it comes to the passing game.

Clay Helton spoke at length about Harrell’s affinity for using tight ends in his offense, but the USC tight ends caught just 15 passes last season. Of course, Harrell also said that the best 11 players would play, and with the trio of established receivers in Michael Pittman, Tyler Vaughns and Amon-Ra St. Brown, as well as the rapid maturation of Drake London, it became evident that Harrell felt that getting the ball to those four receivers often represented the best option for the Trojans.

Baker will be tasked with helping St. Brown take another step forward, as the junior-to-be should have an opportunity to step up as USC’s No. 1 receiver in 2020. The Trojans also have John Jackson III returning as a slot receiver, and signed dynamic speedster Gary Bryant Jr. in the 2020 recruiting class.

As for tight ends, Erik Krommenhoek and Josh Falo return, and the Trojans should be able to get full seasons out of Ethan Rae and Jude Wolfe, who missed all or most of the 2019 season while recovering from injuries.

Now, with reportedly just two spots open, and still in need of a defensive coordinator, it will be interesting to see if the Trojans give up a defensive coaching position by hiring a full-time special teams coach, or attempt to find a defensive position coach who can also work special teams.