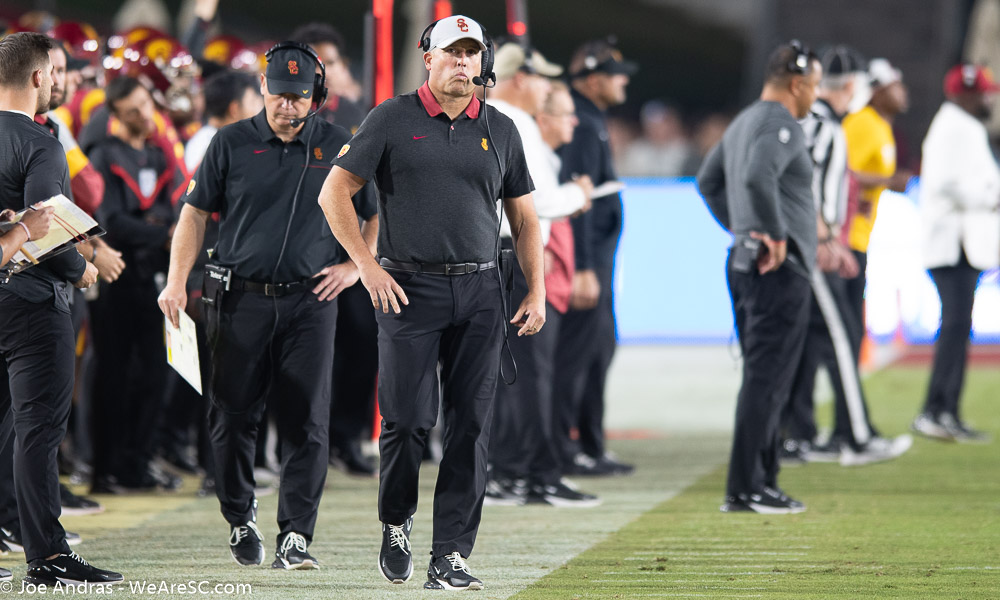 USC fans might finally have an answer to the question they’ve been wondering about since the regular season ended for the Trojans 10 days ago.

Clay Helton will remain the USC head coach, according to a Tuesday night report from Zach Barnett of FootballScoop.com.

Helton’s future had been rumored and commented upon since USC’s final game of the regular, when the Trojans beat UCLA 52-35 to finish the 2019 season with an 8-4 record. While it appeared likely that athletic director Mike Bohn would be forced to eventually make a coaching change when he was announced just a few days following USC’s blowout home loss to the Oregon Ducks, the Trojans won their final three games of the season and Helton has apparently done enough to warrant another go around as the Trojans’ head coach.

The official announcement is expected to come on Wednesday, according to Barnett.

Helton is 40-21 as USC’s head coach, including 13-11 the past two seasons. Playing with the preseason No. 2 quarterback throughout the 2019 season, the Trojans remained in the Pac-12 South race until the final weekend of the season, when Utah clinched the division. The Trojans swept the five games against their Pac-12 South rivals, but lost to Oregon and Washington in conference, as well as BYU and Notre Dame in nonconference play.

If this announcement is indeed made, attention will immediately turn to Helton’s assistants. Offensive coordinator Graham Harrell–a bright spot in 2019 in leading a much-improved USC offense–is reportedly a target of the Texas Longhorns, which now has an open offensive coordinator position to offer. It also remains to be seen whether Helton will be pressured to part with defensive coordinator Clancy Pendergast and special teams coordinator John Baxter, whose units underperformed statistically this season.

Helton could be under pressure to win big next season, against a schedule that includes a neutral site game against Alabama, as well as a five-away game conference schedule, including trips to Oregon and Utah.

Recruiting will also be something to watch moving forward. USC currently ranks 67th in the country with its 2020 recruiting class, and ahead of only Utah in the Pac-12. The Trojans don’t have a commitment from any of the top-30 prospects in California and hold commitments from just two of the top 400 prospects in the country, according to 247 Sports, as wide receiver Joshua Jackson (Harbor City, Calif./Narbonne) checks in at No. 351 and offensive guard Jonah Monheim (Moorpark, Calif./Moorpark) is No. 367. Whether the Trojans can jump into the mix with elite prospects such as linebacker Justin Flowe (Upland, Calif./Upland) or cornerback Elias Ricks (Bradenton, Fla./IMG) remains to be seen, but reportedly could be highly unlikely given this decision.

On the other hand, the Trojans are off to a fairly strong start with the 2021 recruiting class. Quarterback Jake Garcia (Harbor City, Calif./Narbonne) is a five-star prospect and the No. 14 recruit in the country according to the 247 Composite. Linebacker Ma’a Gaoteote is a top-100 prospect and the No. 5 outside linebacker in his class. Defensive tackle Jay Toia (Simi Valley, Calif./Grace Bretheren) and wide receiver Velltray Jefferson (Fresno, Calif./Edison) are both ESPN Jr 300 prospects. USC would also appear to have a shot with defensive end Korey Foreman (Corona, Calif./Centennial), the nation’s No. 1 overall prospect, and standout linebacker Raesjon Davis (Santa Ana, Calif./Mater Dei).