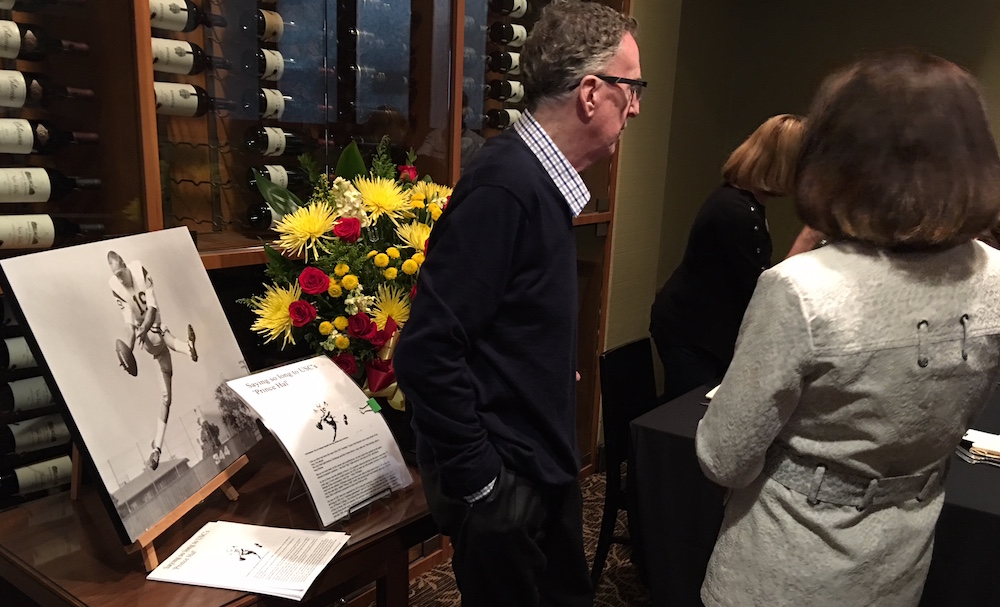 They called him Prince Hal when he played for the Trojans, and the friends and family of former USC great Hal Bedsole remembered him that way during a memorial dinner held Saturday night at McKay’s restaurant.

Bedsole was certainly a star football player, a College Football Hall of Famer who still holds the USC record for average yards per catch (20.9) and a part of a national champion and Rose Bowl winning team. He was later a 2nd round draft pick of the Minnesota Vikings.

What impressed me about his service, however, was not the tales of his on-field exploits. Instead it was the words of the speakers, many of them who had been friends with Hal for 50 or 60 years, as they spoke with obvious affection for the man who passed away in December at the age of 76.

His daughter Traci Woods was the first to speak and welcome everyone, and as she was talking one of the crowd members yelled “we loved your dad”. 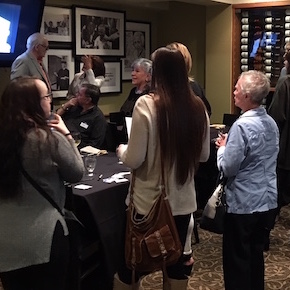 Former teammate Tom Lupou was next and he talked about how Bedsole was never shy about expressing his opinion “if you wanted an opposing view, call Hal, no matter what the topic”.

Longtime friend Bob Case “I’ve been in the boxing game for 25 years and I never knew a tougher man than Hal.”

Case also talked about Bedsole’s health issues, which included 30 knee surgeries and the inability to eat or drink for the last several years of his life, “Hal told me he never realized how much eating and drinking meant to being a social human being. That was as close to a complaint as you would ever hear from him. In the end, his body just couldn’t take it anymore”

Bedsole once worked for Fred de Avila, who came from a family of USC football fans, and at one point Fred’s father had an extended hospital stay “Hal would go down and visit with him every morning, talking football and family. My dad couldn’t believe it, the great Hal Bedsole was visiting with him. But that’s just who Hal was.” 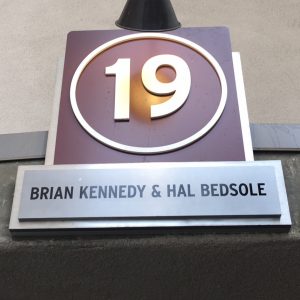 Harvey Hyde, who coached Randall Cunningham at UNLV, thought Bedsole would have been a terrific running quarterback in the mold of Cunningham “Can you imagine what he would have been today in the NFL? They have guys like Cam Newton, well that was Hal. He was told he couldn’t play QB when he got to SC because they wanted a drop-back passer, so he moved to wide receiver. And for those of you who remember him in the Rose Bowl, thanks to Brian Kennedy he will always be a part of that stadium with a plaque above Tunnel 19, which was his number.”

Brian Kennedy was Hal’s roommate at USC and lifelong friend “Hal and I met at Marks Hall, Nick McLean introduced us, and I will always be associated with him, he was my best friend. We ended up living in one of the 3 houses behind Julie’s on her property after we had gotten thrown out of the fraternity, we had a bad night (laughs from those who were there and knew the story). Julie would feed us every night, she would bring the menu and ask us what we wanted. We would walk across the street and go to Dodger games at the Coliseum. He took care of me at USC. He was the BMOC and I was the one he was with.”

Kennedy also showed the crowd a gift that Case had presented him with earlier that night, Bedsole’s letterman sweater from USC, which was still in terrific condition.