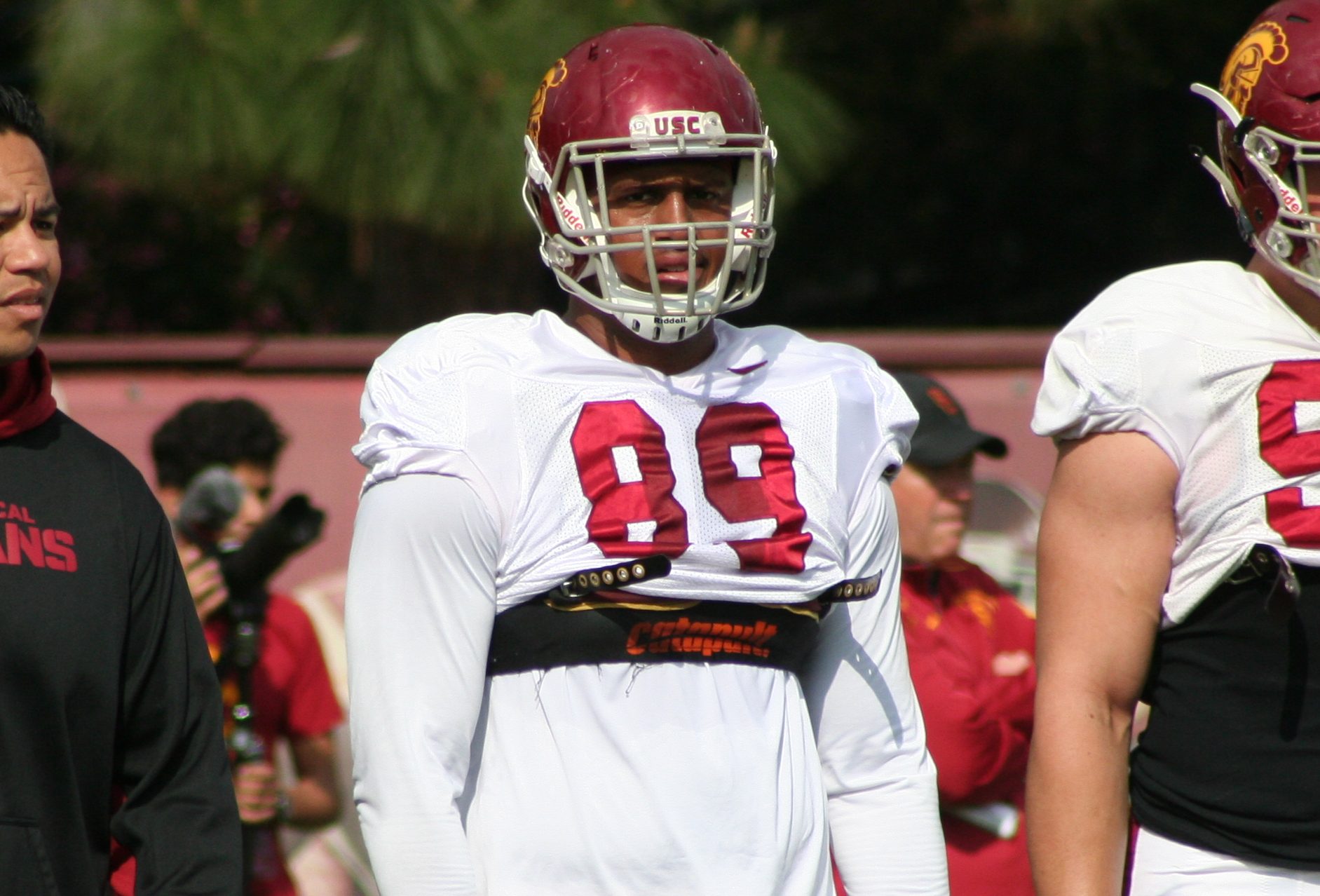 Since Pete Carroll’s USC dynasty in the early 2000s, the question as to whether USC was “back” has been asked a number of times—following the 10-2 season in 2011, where USC finished as the No. 6 team in the country, after USC’s upset of No. 4 Stanford in 2013, and after winning the Rose Bowl and grabbing a No. 3 national ranking following the 2016 season. But any hint of USC making its way “back” was thoroughly dismissed last season, during a 5-7 year that featured few signs of life anywhere in the program. Still, after an offseason of change, including a new offensive system, new coaches on all three levels of the defense, and a completely new strength and conditioning staff and program, senior defensive end Christian Rector isn’t shy about throwing the word around when he talks about the upcoming 2019 season.

Rector made the decision to return to USC for his senior season, and did so with a clear goal in mind.

“It’s very important for me to come back and try to change the narrative,” Rector said. “We didn’t do too well last year, going 5-7 and not making a bowl game. I want to be part of the difference to try to change that culture and bring us back to where we should be. To bring USC football back.”

Rector added that fellow seniors Jordan Iosefa, John Houston, and Michael Pittman are a few of the older players who have stepped up as well.

“They’ve been here when we’ve won and they were here last year when we didn’t do so well,” Rector said. “I think we’re really hungry to bring us back to prominence.”

Rector said that “doing the little things right” has been a significant push by the coaching staff and staff this offseason.

So much attention has been paid to the changes made by new strength and conditioning coach Aaron Ausmus, and Rector is another Trojan player singing his praises.

“[There’s a] focus on accountability,” Rector said of the new Ausmus program. “It starts with us. It doesn’t matter who our coaches are, because they’re going to come and go…He’s helped instill that culture of doing it for us. Because at the end of the day, we’re the ones going on the field.”

Rector said that sense of accountability has been helped by Ausmus splitting the roster into four teams and creating a competition with every aspect of the summer, from attendance to weigh-ins to lifting competitions.

“Guys used to fluctuate weight all the time,” Rector said. “[They’d] go out on the weekends and come in overweight or underweight…Now, you’re accountable directly to your team, because you want to win…If you show up late or miss a workouts, it affects your team, and so you want to make sure you’re not negatively affecting your team…You kind of knew which guys were falling behind or slacking in the past, but now everybody sees it. There’s no hiding.”

Ausmus also set goals for individual players, both with their own weight as well as goals for each lift. Rector said this program focuses more on olympic-style lifts—pulls, presses, cleans—rather than the “more functional movement” drills of the past, which included a lot of single leg work.

Rector’s goal weight for the summer was to get to 275 pounds, which he said he hit very quickly, after playing at 265 last season. Rector said that with this program, he puts on one to two pounds each week. Now, he’s maintaining between 273 and 277, and said he is very comfortable there and “moving great.”

The weight gains and confidence in lifting and the program have been evident throughout the team.

“Peoples’ backs are getting bigger,” Rector said. “They’re necks. We’re doing neck exercises. You can definitely see it. Peoples’ chests are starting to poke out more.”

Like other players this summer, Rector echoed the sentiment of players buying in, which was clearly missing from last year’s program.

“We don’t have that same problem of guys not willing to buy into the program,” Rector said. “Kids were leaving the program and kind of on the fence, but we have a good group of guys who are all focused toward the same goal.”

That goal likely starts with a Pac-12 title, and the march toward that, as far as it pertains to Rector, starts with a solid defensive line. The pieces are there, with veteran presences spread across the line and the addition of newcomers who should help immediately.

“I have high expectations for our d-line,” Rector said. “We have a lot of guys inside who have played a lot, in Marlon [Tuipulotu], Jay [Tufele], and [Brandon] Pili, and I’m looking for them to stop the run and get after the ball. And on the outside, we’re talented too. We have a young talent in Drake Jackson, and Murph (Connor Murphy), who has played a lot. We’ll try to bring along the younger guys too, and see what they can do.”