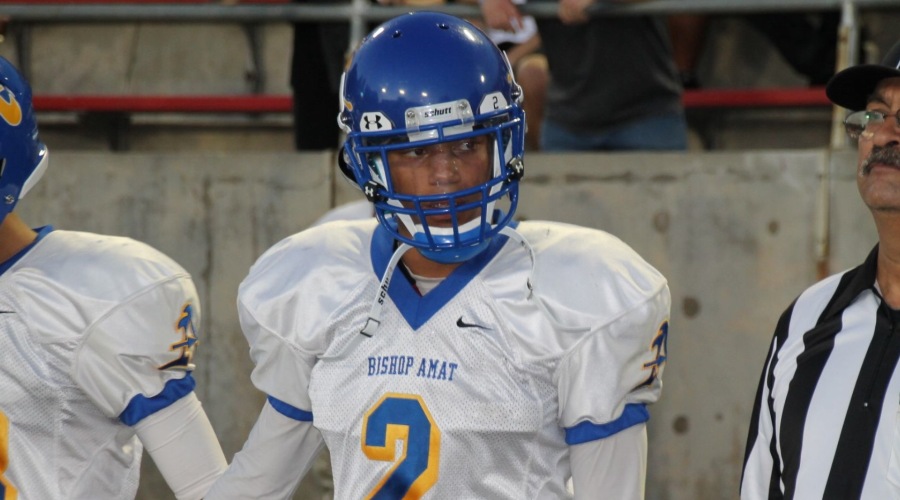 Garry Paskwietz and Johnny Curren give an update on where things stand for the Trojans with the recruiting class of 2016:

Garry Paskwietz: Johnny, now that the dead period is officially here let’s take a moment to do an overview of where things are at with recruiting. With 25 spots in the class of 2016, the Trojans have already given out 5 blueshirt spots, which means 20 remaining spots, and there are 14 verbal commitments in place. Those 14 include Velus Jones, and there are a lot of rumblings about him possibly ending up elsewhere. So there really aren’t that many spots remaining but the good news is that the Trojans expect a nice group of enroll enrollees.

Johnny Curren: That’s right. Four players have already signed early enrollment papers with USC in Josh Imatorbhebhe, Michael Pittman, Nathan Smith and C.J. Pollard. Additionally, all indications are that Matt Fink and Liam Jimmons will also be on campus in January. So as it stands right now, six players are expected to enroll early, and there’s still the possibility of more being added to the list.

Garry Paskwietz: That’s a real nice group to be adding for spring ball. And as we move forward to start talking about some of the top targets remaining on the wish list, let’s begin with another player who could be an early enrollee and that’s Oluwole Betiku. He is expected to make his announcement at the Under Armour game (although that isn’t 100% certain yet) but all the rumor winds are blowing in favor of USC in recent weeks and a large part of that is based on his good relationship with Clay Helton.

Johnny Curren: Betiku definitely has built up a strong relationship with Helton, and he’s also close to a number of former Serra players currently at USC, and that high comfort level is a big reason why USC is the likely favorite for his services right now. Florida State, Texas A&M and Notre Dame are the other major contenders here, but again, it’s looking good for the Trojans.

Garry Paskwietz: That would qualify as one of the major recruiting flips in recent memory, I think Betiku has a chance to be that good. Now let’s go from a guy who might flip from UCLA to USC to a guy that nobody wants to see flip from USC to UCLA, and that’s Mique Juarez. With Su’a Cravens leaving for the NFL, it would seem to open up an early opportunity to compete for playing time for Juarez. Where do things stand right now with him?

Johnny Curren: The Trojans are still battling the likes of UCLA, Oklahoma, Alabama, Ole Miss and others, but right now, the general feeling is that he might be leaning toward the Bruins. USC isn’t out of it yet, though. Helton recently made an in-home visit and the fact that Cravens is leaving has to help matters. Juarez has said that early playing time is a major factor in his decision on a number of occasions. He still has two official visits to take, so it will be interesting to see if USC gets one of them. There was a chance that he was going to visit last weekend, but he opted to trip to Oklahoma instead. He was going to announce at the Army All-American Bowl at one point, but now it looks like he might wait until signing day.

Garry Paskwietz: Waiting is a good thing in this case in order to give a new USC coordinator the chance to make an impression on Mique. Helton has said he wants one in place by the 15th, which will be the next big recruiting weekend, and you know that’s no accident with the timing to be able to introduce him to recruits. Let’s get some quick updates on a few other names. How about the recent interest in Khalil Tate? I like it a lot. I think he’s more a talented runner than anything but he’s also a tremendous athlete and Helton is telling him he will get every shot at QB. I know Tate likes Rich Rod, do you think the Trojans have a shot here?

Johnny Curren: I think that USC does have a legitimate shot with Tate, and the fact that he took an official visit to USC last weekend seems to confirm that fact. I think the fact that Helton is willing to give him a shot at quarterback has really made a difference here. Still, you can be sure that Arizona won’t back down easily. We won’t have to wait too long to find out his decision, though. As an early entrant, he’ll have to make a final choice soon.

Garry Paskwietz: Let’s talk about a pair of teammates who will be playing in the state bowl game open division game this weekend, and that’s Devin Asiasi and Boss Tagaloa from DeLaSalle. Asiasi has long been a top USC target but he’s also coming off what appeared to be a well received UCLA official visit. Tagaloa was only offered recently by the Trojans, but Helton can make the case that he offered once the defensive coaches who didn’t want him were gone. Where do you see things with these two Spartans?

Johnny Curren: The Trojans still have a battle on their hands with both prospects. Marques Tuiasosopo and USC have been in a good spot with Asiasi throughout the process, and the Trojans also get his last official visit on Jan. 30. But like you said, he had a good time on his UCLA official, and UW, Alabama and Michigan are certainly in the mix as well. With Tagaloa, USC has a lot of ground to make up, but you never know. I think the key will be trying to get him to come with his friend, Asiasi, on that Jan. 30 visit to USC. If that happens, the Trojans have a chance.

Garry Paskwietz: I think a lot of Trojan fans found it puzzling along the way to not offer a guy like Tagaloa. We already talked about what an impact it would be to flip Wole but can you imagine if an interior guy like Boss was added to the mix as well. Suddenly the D-line recruiting class goes from solid to spectacular. Another position group where a lot is still to be determined is the secondary. C.J. Pollard is already in the fold at safety, and there’s always the chance Trevon Sidney ends up at corner, but where do you see things standing right now with top targets Jackie Jones, Troy Warner and Lamar Jackson?

Johnny Curren: Jones has kept his recruitment close to his vest throughout the process, and it’s anyone’s guess as to where he’s really leaning. He’s supposed to reveal a top 5 this week, so we should get a better feel then. He was at USC not too long ago for an unofficial, and UCLA, ASU and Texas A&M are others who figure to be in the mix. Warner’s trip to USC really shook things up, and I wouldn’t be surprised at all if he winds up flipping to USC. The longer BYU goes without hiring a new head coach, the greater the Trojans’ chances become here. I like the fact that he’s so versatile – he can play safety or cornerback. Lamar Jackson is really down to USC, UCLA, Nebraska and ASU, and again, USC has a great shot here. He’s already taken all 5 of his official visits, but he will likely take an unofficial to USC in January, and he plans to announce one week before signing day.

Garry Paskwietz: OK, let’s focus on the upcoming all-star games for a minute to talk about who you are looking forward to seeing in each game the most. For the Under Armour game, I’m going to go with Matt Fink. the ESPN recruiting guys have long ranked Fink the highest, and they quickly put him into this game. It will be Fink’s opportunity to make a big statement in terms of where he stands against the other top quarterbacks there. For the Army game, I certainly want to see Mique but I’m also going to say the trio of USC receivers in Pittman, Vaughns and Sidney. Would love to see them light it up.

Garry Paskwietz: Thanks Johnny. We will do one of these again after the all-star games to preview the January recruiting weekends and the upcoming Junior Day.