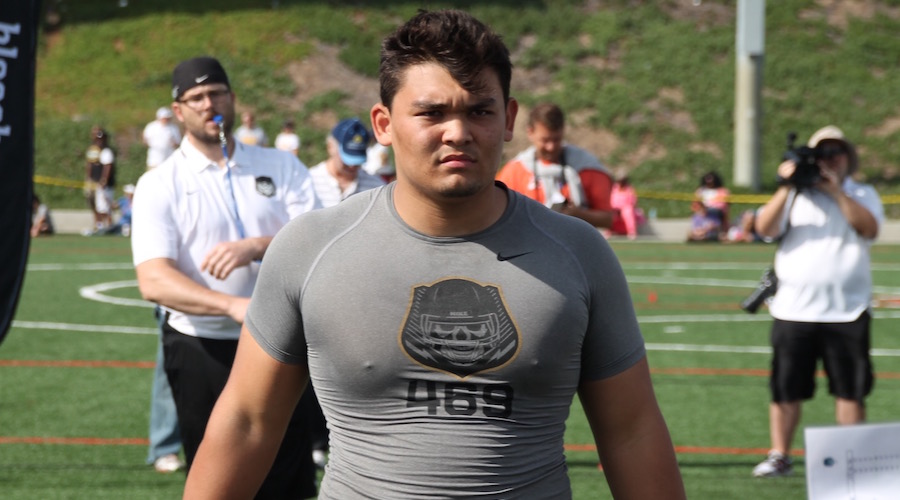 Garry Paskwietz and Johnny Curren look at where things stand for the USC recruiting class of 2017 as the Trojans get ready to host a big recruiting weekend:

Garry Paskwietz: OK Johnny, things are able to pick back up with recruiting with the dead period ending and a bunch of official visitors set to arrive on campus this weekend. Before we talk about them, let’s do a quick overview on where things are at with this class in terms of the number of commits, class ranking, etc.

Johnny Curren: The Trojans are in great position right now, and certainly with plenty of momentum. They have a total of 16 commits in this class, 4 of which are actually already enrolled in class. The total number of available scholarships looks to be 23 due to USC taking two blueshirt players last year in Stevie Tu’ikolovatu and Michael Brown. That means the Trojans have 7 more rides to give, but there is always a chance that some more defections from the current class could take place. USC might also add a player or two under the blueshirt tag again. In terms of a ranking, USC is No. 15 according to ESPN RecruitingNation right now, but you can be sure that the Trojans will be moving up that list.

GP: That momentum part is going to be key because there are a lot of really good prospects still out there who could dramatically impact the finish of the class, and this staff showed last year that they have the ability to maneuver through the final stages up until signing day. I want each of us to give one area of the class that is the priority for the remaining spots – I’m going to go with the defensive line (particularly the interior) and I’m sure a lot of people reading this would say the same thing. I’m actually pretty content with where things are on the offensive line (and I think things will get even better) but it’s the big men in the middle of the DL that needs some work.

JC: I agree. The Trojans have a big body in the fold along the defensive line right now in Terrance Lang, and another player, Jacob Lichtenstein, who could really wind up at outside linebacker or on the line, depending on how much weight he can put on. Expect USC to add at least two more players on the interior if they can. Jay Tufele is obviously a primary target, but so too are Aubrey Solomon, Javon Kinlaw and Neill Farrell, and all three will be on campus this weekend. Brandon Pili and Myron Tagovailoa-Amosa are also realistic possibilities, and there’s also Marvin Wilson, who is more of a long shot.

GP: I agree on Tufele in terms of importance and I really get the sense that the Trojans have a legit shot. It couldn’t have hurt to have him see Stevie T (a fellow Utah DL) do so well this year while playing at SC. Tufele was talking at one point about being part of the trip this weekend (which would have been an incredible group of DT talent at one time) but now it looks as if he will visit on the 20th. As you mention, however, still plenty of good DL on campus this weekend, and 10 total recruits planned to visit as of right now. The one name I’m really taking a look at this weekend is Josh Falo, who I think is a unique pass catching weapon at tight end in this class. For most of the fall it felt like USC was on the outside looking in for Falo against competition from Colorado and Oregon but a good visit this weekend could definitely change that. Talk about who else we will see.

JC: Right now it looks like a total of 10 players. In addition to Falo, Farrell (LSU commit), Kinlaw and Solomon, others expected are safety Isaiah Pola-Mao, Offensive lineman Jalen McKenzie, cornerback and Cal-commit Je’Quari Godfrey,and then a trio of USC pledges in Bubba Bolden, Brett Neilon (photo above) and Lichtenstein.

GP: I like seeing Brett Neilon in this group because I think he’s been an effective recruiter for this class, and i hope he can do some work on Jalen McKenzie. When we saw McKenzie at The Opening regional in Oakland he was one of the more physically impressive players you will want to see as an offensive line prospect. He’s a bit on the raw side but the tools are there and he has good genes. I also like seeing Jacob Lichtenstein coming for his visit, there’s been some speculation as to whether or not he would end up in this class, and this is a good sign that he will be here. Glad to see Pola-Mao get a visit, the family name has been good to USC. Interesting to see Godfrey on the list. When he cancelled his December visit it looked like he would be sticking with Cal, but the Trojan coaches obviously see something they like to maintain interest.

JC: Godfrey is a big, long corner who could also potentially line up at safety, so his versatility is likely to be something that has their attention. With his teammate, Alijah Vera-Tucker, a solid USC pledge, you’ve got to think the Trojans have a real shot there. I’m curious to see how those three interior defensive linemen come away from the trip. If USC lands even one of them by Signing Day, it will be big.

GP: Speaking of safety, Bubba Bolden will also be on the visit after a long and winding recruiting process saw him wind up right where he started, as a USC verbal. I’ll say this on Bubba, he’s one of the elite recruits who showed up every time I watched Bishop Gorman, he was always making plays to impact the game. i also think he’s adding bulk to his frame and he could wind up pairing with someone like Jamel Cook to be a real enforcer duo.

JC: As you mentioned, the key with him is his unique ability as a playmaker. Every time I’ve watched him, from 7-on-7 to when he’s in pads, he’s always around the ball, making interceptions, picking up fumbles, or as we saw in the US Army All-American Bowl, blocking a field goal and taking it back for six. His recruitment was really interesting. Having decommitted from USC last summer, he committed to them a second time at the AA Bowl, despite a late surge by ASU.

GP: The Trojans also have big recruiting weekends set up for the 20th and 27th, along with the possibility of a key mid-week visitor as well. Let’s look ahead at the weekend of the 20th, who is scheduled right now?

JC: At this point it’s looking like Tufele, Georgia Tech commits Bruce Jordan-Swilling and Tre Swilling,Arizona commit Tony Wallace, and then a whole host of USC pledges like Stephen Carr, Hunter Echols, Erik Krommenhoek, Lang and Vera-Tucker. Levi Jones could also potentially come in this weekend, although he might wind up coming in on the 27th. It certainly wouldn’t be a surprise to see more names added as well.

GP: The Swilling brothers are interesting as they certainly had positive things to say about USC when they were out here last summer for Rising Stars Camp. Right now they are commits to their dad’s alma mater but there is definite interest in the Trojans. Carr is the big one among those SC commits for me, I will be happy when he’s signed and running the ball as an SC tailback. How about the 27th list of visitors? And what is the visit status for Deommodore Lenoir?

JC: Lenoir is actually slated to come in for a mid-week visit starting on Jan. 16, although he mentioned in San Antonio that there was a chance he would swap that with his Jan. 20 weekend visit to Nebraska so he could be at USC at the same time as guys like Carr and Echols. He holds a solid relationship with a lot of Trojans commits, so you’ve got to think they have a real shot. As far as the 27th, the two Hawkins stars might be the headliners – Joseph Lewis and Greg Johnson, and then you’ve also got Gary Johnson,  K’Lavon Chaisson, and Oklahoma cornerback commit Tre Brown

GP: With Lenoir and Greg Johnson still to come in I think we could be looking at those two as the corners in this class. While I would have loved to get Darnay, i would be very content if it ends up being Lenoir and Johnson. i know there have been some questions about Lenoir’s size but I don’t share them, I think he’s plenty big, and Johnson caught the eye of Darrell Rideaux for his press coverage abilities. And if Johnson can help reel in his teammate Lewis (which could easily happen) that would be all the better. Any of those last 3 you mention could be very interesting if they have legit interest.

JC: The Trojans have made up a ton of ground with Lewis. He said that USC and Nebraska are his leaders in San Antonio, and it’s obvious that he likes what is going with the Trojans right now. If USC is able to land him, it will be quite a pickup I think he’s the best receiver I saw this year. It remains to be seen on those last three. Gary Johnson is the one I’m going to be keeping close tabs on. Even with Tayler Katoa in the fold, the Trojans need bodies at inside linebacker, and Johnson could provide immediate help. ASU, Oregon, Texas and Louisville are the other schools in the hunt for him.

GP: Completely agree on Gary Johnson. With Hutchings and Powell gone (and Masina no longer on the roster) the depth at ILB could all of a sudden use a boost, and it sounds like Johnson is a real physical presence. To wrap this up, let’s each give one thing we’ll be watching for during these last 3 weeks of recruiting. I think it’s natural to be watching to see how this staff juggles the remaining spots, to see if they can manage things as effectively as they did last year, because if they do I think we could be looking at a top 5 class, or certainly one that is in the neighborhood.

JC: I’m going to be watching to see how the staff closes on both sides of the line, because I think it’s such a crucial area in regard to the future success of team. Can they reel in a special talent like Tufele or Solomon? Maybe get a guy like Kinlaw who can help immediately? On the other side, I’ve always considered Austin Jackson the must-get guy in this class. USC needs offensive tackles, and he’s a fantastic prospect there. I also really like the decision to go after Jalen McKenzie, a player with a high ceiling. If USC lands both Jackson and McKenzie, they will have definitely helped shore that position up.

GP: I think you highlight the key point of these remaining three weeks in that there are plenty of guys out there to help close things out strong, especially on the lines, so now it’s just a matter of going out and doing it. Thanks Johnny, we will do one of these again next week.