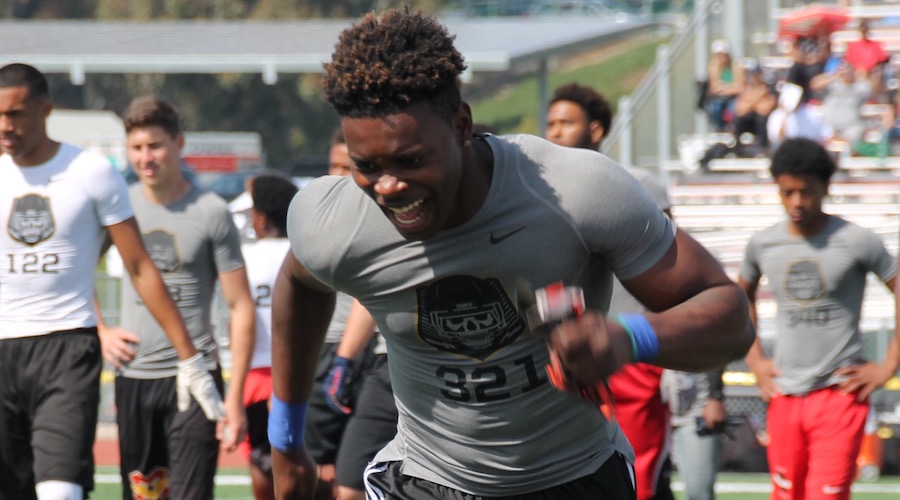 Garry Paskwietz and Johnny Curren discuss where things stands for the Trojans with the class of 2017 as signing day quickly approaches, including an update on what took place during the final recruiting weekend.

Garry Paskwietz: We’re down to the final few days for this recruiting class so let’s get a reset to see where things are for the Trojans. Go ahead and give us the latest numbers in terms of commits, available rides and class rankings.

Johnny Curren: As it stands now, the Trojans have 18 commits for the Class of 2017, four of which are already enrolled at USC. No official word has been released, but there are rumors that Marlon Tuipulotu might be added to that group of early entrants as well. In either case, with 23 available scholarships to give this cycle, USC would appear to have five scholarships left. As far as the rankings,USC is No. 8 according to 24/7, No. 9 according to Rivals, and No. 12 according to both ESPN and Scout.

Garry Paskwietz: And things were busy this past weekend, which was the final time for official visits, so let’s talk about a couple interesting visits that were made. USC had Joseph Lewis (photo above) and Greg Johnson on campus, but other trips of note included USC verbal RB Stephen Carr to UCLA, verbal LB Juliano Falaniko to Oregon (along with top TE recruit Josh Falo) and DT target Jay Tufele to Utah. I think the Carr situation has the attention of a lot of Trojan fans, he seems a solid commit in so many ways but the rumor winds can swirl this time of year.

Johnny Curren: It’s definitely getting down to crunch time, and this is when things typically get really interesting. That’s definitely the case this year, especially with Carr. At this point, I’d still be really surprised if he winds up anywhere but USC, but Trojans fans will definitely want to keep a close eye on that situation. Falo and Falaniko’s visit has been a big topic too. Oregon does appear to be a major player both both prospects, and the trip up to Eugene definitely helped the Ducks chances there. For now, Falaniko is still committed, but if he does wind up flipping it wouldn’t necessarily be a shock. Falo, meanwhile, is too close to call between Oregon, USC and Colorado. Another Trojan pledge, Terrance Lang, took a visit to Colorado, but it looks like he’s still all USC.

Garry Paskwietz: I’m with you on Carr. It doesn’t seem to make a lot of sense that a flip would be coming on this one but I will feel better once the situation is settled. This isn’t just another RB recruit, he’s got a chance to be an elite one and he needs to be an SC tailback. What’s your read on Tufele right now? I like the thought of him being friends with Marlon Tuipulotu and wanting to play together but Utah has seemed like a school that could be a real challenge and it seemed like his visit went well over the weekend.

Johnny Curren: Utah definitely looks to be USC’s most serious challenge for Tufele, and this is another one that I think is too close to call here on Monday. The fact that his entire family made the trip to Utah, while only his father came with him to USC, certainly gives Utah an edge in that regard. That being said, the Trojans still have a great shot, due in part to his relationship with Tuipulotu, as well as defensive line coach Kenechi Udeze.

Garry Paskwietz: And there are still other options on the d-line. Aubrey Solomon is certainly a good one and i get the sense his interest in USC is genuine, but most speculation has him headed to either Alabama or Michigan. What are your thoughts on Solomon and some of the other guys that might come into play if rides are available or as possible blueshirts?

Johnny Curren: Solomon has been hard to get a read on. Michigan, where he previously committed, is the favorite, but USC still looks to have a chance. The Trojans are also still in it for JUCO DT Javon Kinlaw. South Carolina is the favorite to land him, but the Trojans are still trying to pull off a surprise there as well. As you alluded to, there might also be some potential backup options along the defensive line in Myron Tagovailoa-Amosa, Aliki Vimahi and Austin Faoliu. Neil Farrell recently released a top 3 that included USC, LSU and FSU, but my bet is he stays in the South. Guys like Vimahi and Faoliu could also be potential blueshirt options, just as OLB Michael Owusu.

Garry Paskwietz: The Trojan d-line class is good as it stands right now, but there’s a real opportunity here to add a couple bodies that would make it something special. Let’s talk corner for a minute. It’s pretty clear the coaches want to add one more and it seems to be down to Greg Johnson or Elijah Blades, two guys with differing styles of play. There hasn’t really been any news coming out of the weekend yet with Johnson and Lewis on their trip to SC so how do you see things at corner?

Johnny Curren: I think USC looks really good for Johnson right now. He’s really down to USC, Oregon and Nebraska, but the Trojans have made up so much ground here, and they have a terrific chance to sign him. Shortly after decommitting from Florida, Blades released a top 5 that included USC, but the big question is: Do they have room? If some current commits or players who they think are coming head elsewhere, they might. As it stands now, however, Nebraska and Oregon might be the frontrunners.

Garry Paskwietz: This is definitely a case of having a lot of good options and having to choose which players make the most sense for the spots. For guys like Joseph Lewis and Austin Jackson, I think there is a spot no matter what. I think it gets interesting for a guy like Levi Jones. We could use another linebacker and I would certainly like to have him if he wants to come, but is there room? It’s similar to what you mentioned with Blades. Those are some tough choices for the coaches and the great part about recruiting is seeing how things come together on signing day because there are always some twists and turns. Thanks Johnny.