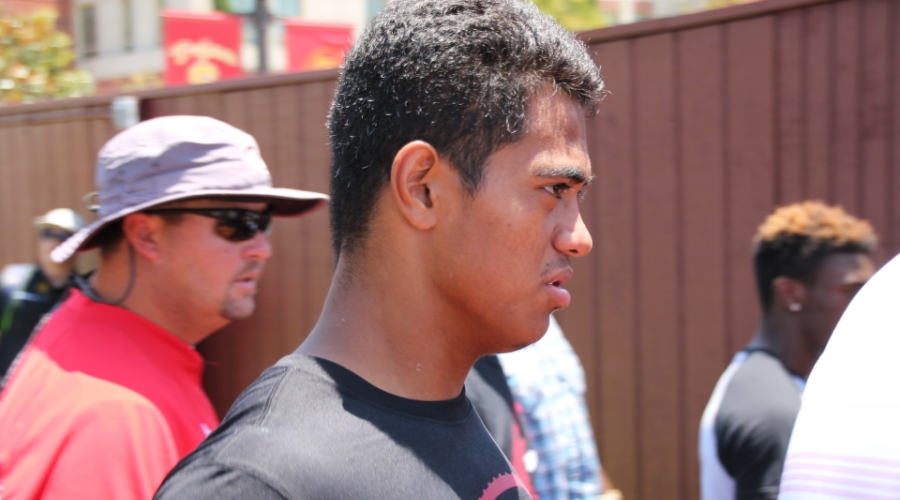 Garry Paskwietz and Johnny Curren discuss the latest topics in USC recruiting including an upcoming visit weekend with plenty of top prospects.

Garry Paskwietz: Hey Johnny. It’s that time of year for the final stretch of recruiting and there is still a lot left to be decided for Clay Helton and the Trojans. Just to give an overview on the numbers, where do things stand right now in terms of commits, available spots and team rankings.

Johnny Curren: Hi Garry. The Trojans are currently sitting at No. 13 on the Recruiting Nation Class Rankings. Clay Helton and Co. currently have a total of 14 commits, with 20 available slots. Of those 14 commits, 7 are expected to be mid-year enrollees. With USC still in on a number of big-name targets such as Jack Jones, Lamar Jackson and even some long shots like Rashan Gary and E.J. Price, there’s a good chance that the Trojans will finish a lot higher in the rankings than they are now.

Garry Paskwietz: And the first opportunity to make a big splash is going to come this weekend when an impressive group of visitors comes in for official trips. I realize there is a big gun in Rashan Gary and I do think he’s the kind of guy who, along with his mom, can “get” what USC has to offer but i still think he’s a longshot until proven otherwise. I’m looking at two other areas; 1) the Arizona Murphys, Connor and Byron. One or both would be real nice. 2) A trio of OOS commits that we just haven’t heard much from in the recruiting process and that’s Jordan Iosefa (photo above), Cary Angeline and Velus Jones. What would the over/under have been this fall from USC fans on whether or not Jones would be in the class when all is said and done but here he is on his visit.

Johnny Curren: Landing either of the Murphy’s would be a nice coup for the Trojans. I thought Connor looked great at the Opening, and he’s maintained interest in the Trojans throughout the process, despite the coaching shakeup. Byron has reconnected with the Trojans staff following Keith Heyward’s dismissal, and I think it will be important for him to sit down with Clancy Pendergast – assuming he will be on campus by then. ASU, Texas A&M and UW are the other schools in the running for him. Agree on those out-of-state guys. This will be a crucial weekend for all three, particularly Jones. With Tee Martin – his primary contact – having been retained and elevated to offensive coordinator, the Trojans actually look to have a better shot at holding onto him than they might have had a couple months back.

Garry Paskwietz: I agree, I would put the chances better with Byron than Connor right now and that’s OK, corners are a priority. In fact, SC is bringing in another OOS corner in Hill. It just shows, in addition to the pursuit of Jackie Jones, this is one position where there are no commits yet and it’s important to come away with a pair in this class.

Johnny Curren: Absolutely. USC simply doesn’t much depth at corner, so they need to shore up that position. They have a good shot at Jones, and Murphy and Hill are still very much in the picture, but if they strike out on a couple of those guys they could be in trouble. I think that’s why we’ve seen them offer a couple out-of-state guys in recent days, including Aaron Robinson and Carlos Becker.

Garry Paskwietz: And obviously you don’t rule out the possibility of Trevon Sidney at corner if needed. It looks like he will come in as a receiver but the skills are there as a corner as well (many people, including me, think he is a better corner). Let’s talk about another couple recent offers, one was a re-offer to Brandon Burton and another was to the top JC DE in the country, who is now decommitted from Tennessee. On Burton, I like this one a lot, he’s just one of those guys who shows up more in a real game than he ever does in shorts and t-shirt on the camp circuit. He’s a real hitter and I think the chances are good that he continues the Serra pipeline to SC.

Johnny Curren: USC does look to have a good shot with Burton. Shortly following his offer form the Trojans he released a top 3 that included USC along with UCLA and Florida State. He’s already taken officials to FSU, Notre Dame, Ohio State and Oklahoma, so it will be interesting to see if he takes that last one to USC or UCLA, although he has said that he will taken an unofficial to the other school in any case. Kongbo is an immediate impact guy, so he’s definitely worth keeping an eye on. It will be interesting to see if USC can get him to come out for a visit. He’s got a visit scheduled to Alabama this weekend, and he’s already tripped to Oregon State, Ole Miss and Tennessee. Washington and Oregon are also involved, and UCLA and Florida just offered as well, so his recruitment is still far from over.

Garry Paskwietz: The Trojans are also scheduled to host the De La Salle pair of Devin Asiasi and Boss Tagaloa in a few weeks (Jan 30) but you think the move yesterday by Marques Tuiasosopo from the USC staff to the UCLA staff could end up presenting a problem for the Trojans.

Johnny Curren: Yes, of all the USC targets, Asiasi is perhaps the most significantly impacted by Tui’s departure. And obviously if Asiasi doesn’t come to USC, Tagaloa certainly doesn’t either. The good news, from talking to Asiasi at a practice for the Army AA Bowl, is that Asiasi’s contact with USC wasn’t completely confined to Tui. He’s also gotten to know Clay Helton, so hopefully that, as well as his interest in the program itself, keeps the Trojans in the running. UCLA obviously has a better shot now, and he’s also still looking at Alabama, UW and Michigan.

Garry Paskwietz: Without a doubt that’s a key one. Not one good player but two good players impacted at two key positions of need. And Devin seems to have a lot of positive feelings these days about SC so hopefully the Trojans can land him, and Boss. Devin had a nice touchdown catch in the Army game but I thought the recruit who stood out the most to me was Jackie Jones at corner. Not only to get the interception with a nice return but the fact that he led the West in tackles, with 7 solo tackles. Remember that Orgeron said the DB’s never tackled as well at SC as when Clancy was there so it would be nice to pair those two together.

Johnny Curren: Jones was stellar all week. During the West team’s first practice he put on a show, picking off two passes and nearly intercepting three more. He’s really special – just such a game-breaker on both sides of the ball. Asiasi also had a great practice. I thought he showed a lot of improvement in terms of his pass-catching from last spring when I saw him at the Oakland Regional Nike Camp. At 270 pounds though, you do have to wonder if he can stick at tight end, or if he will wind up on the defensive line, where he’s proven to be a real force as well.

Garry Paskwietz: After I saw Devin use his wing-span to bat down a pass at the line in the state title game I would be just fine with him and Boss coming as a package deal to the Trojan d-line. But if he wants to come as a tight end that is fine with me too. I think he and Angeline would make a good pair to add at that spot. Speaking of all-star games, what did you think of Matt Fink in the UA game? I thought he showed the reasons why some scouts like him with his running ability and his confidence, he definitely played with a swagger, but it also showed what others don’t like about him, which is the inconsistent arm. All in all though, I thought he represented himself well.

Johnny Curren: I agree. Fink isn’t a finished product by any means, but he is a great athlete with nice size, and raw, but still developing passing skills, and he’s shown enough to lead you to believe that with the right coaching, he could blossom down the line. I thought he showed that. He had an up-and-down day, but showed flashes of what there is to like about him.

Garry Paskwietz: OK, today is the day when the early enrollees start to show up so I want each of us to pick a guy we will be watching closely. I’m going to go with Oluwole Betiku, assuming there are no issues with him arriving and enrolling. It was a big moment for Helton and the Trojans a few weeks ago when Wole announced he would be headed to USC but in that time he got sent home from the UA game (a shoulder injury was preventing him from playing in the game) and there are rumblings that he might be enjoying all the attention a little too much. He’s still so new to all this, he’s only been playing the sport for two years, so how makes the adjustment to a whole different level of football and off-field expectations could be something to watch with him.

Johnny Curren: I’ll be watching Josh Imatorbhebhe. He didn’t put up huge numbers this year because the offense he was a part of at North Gwinnett didn’t really feature the wideouts, but he showed enough at The Rising Stars Camp at at The Opening against top-flight talent to lead me to believe he can make his presence felt in a hurry. A big, physical pass-catcher with lights-out leaping ability and soft hands, he reminds me somewhat of JuJu Smith. Throw that in with the fact that he’s a level-headed kid with a strong work ethic, and he looks to have a very bright future.

Garry Paskwietz: With six spots left in the class, give me the names you would put as the top 6 “wish list” priorities on the board.

Garry Paskwietz: thanks Johnny. It should be an interesting stretch run of recruiting, that’s for sure. We will do this again soon.