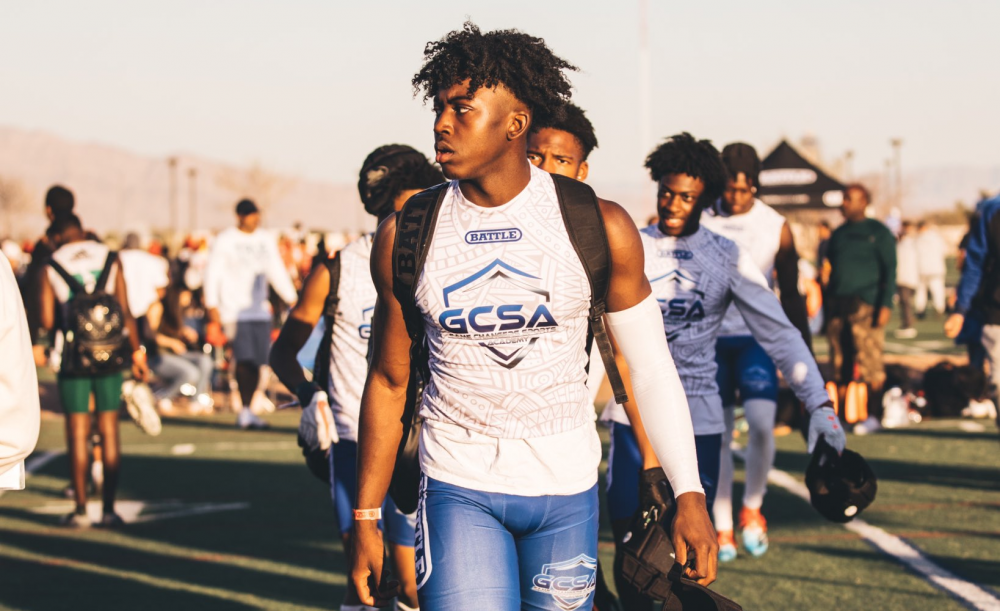 One 2022 prospect who will make a large impact on whatever school he eventually commits to is safety Zion Branch (Las Vegas/Bishop Gorman). The 6-foot-2, 195-pound defensive back is the No. 74 overall prospect and No. 3 safety in his class, and holds offers from programs across the country.

USC extended an offer back in December, but the Trojans have turned up the attention since the arrival of the new staff, maintaining constant communication with Branch. He’d made a connection with USC cornerbacks coach Donte Williams while Williams was at Oregon, so there was some familiarity with this staff when his previous Trojan recruiters–Greg Burns and Chris Hawkins–departed from USC. Branch said his recruitment from USC “started to pick up heavy” with the arrival of the new defensive staff and a new recruiting plan from the coaches.

Just this week, Branch spoke to Williams, wide receivers coach Keary Colbert, defensive graduate assistant Michael Hutchings and safeties coach Craig Naivar. USC coaches and staff are focused on putting multiple points of contact toward every recruit, and Branch has taken notice of the number of USC coaches involved in his recruitment.

“It shows how much interest they have in me, constantly checking on me to see how I’m doing,” Branch said. “It feels like some other coaches have dropped off, but they’ve shown a lot of interest.”

While USC coaches spent time getting to know Branch, he said conversations with Naivar have including some position-specific conversation.

“He was saying I’d be a field-side free safety,” Branch said of his potential future position with the Trojans, adding that he’s looking forward to being able to get out to a practice to see how that position translates in this defense.

Branch said he believes he’d enjoy playing the field side rather than the boundary in order to be involved in more plays.

“I’m a field general,” Branch said in breaking down his own game. “I like to kind of control the defense. I like to be the quarterback of the defense and know what everyone is doing. That helps me make plays.”

As a sophomore last fall, Branch recorded 29 tackles, returned one of his five interceptions for a touchdown, recovered a fumble and blocked a field goal for another strong Bishop Gorman team.

Branch said he’s looking forward to taking a few recruiting visits once prospects are able to do that again. His plan includes traveling the country corner to corner, as he listed Washington, Oregon, USC, Oklahoma, Texas and Florida as schools he’d like to visit. Ultimately, he’d like to be committed to a school heading into his senior season.

If USC continues its pursuit of Branch, the safety said the Trojans will absolutely be part of his final group of schools.

Outside of football, Branch is a major contributor to the Bishop Gorman track team. He competes in the triple jump, long jump, 110 hurdles and 4 X 200. His younger brother Zachariah Branch is a class of 2023 wide receiver who also runs track and is a top prospect as well, with offers from Arizona State, Auburn, Georgia, Oklahoma and others already.

The Trojans will be busy at Bishop Gorman in the 2022 class, as USC has also extended offers to Branch’s teammates in outside linebacker Cyrus Moss and cornerback Fabian Ross.

“A lot of us made an impact on varsity early,” Branch said of the young defensive players. “It gave us a chance to really bond, develop as players and play on a high level early on. So when we get to be upperclassmen, it will all be second-nature to us.”

USC has extended a handful of offers to 2022 running backs, with Nick Singleton (Reading, Pa./Governor Mifflin) grabbing one this past Thursday.

Singleton is the nation’s No. 84 overall recruit in his class and is being recruited hard by Michigan, Notre Dame, Ohio State and Penn State. But USC running backs coach Mike Jinks went in with an offer to see if the Trojans could grab his attention.

“He’s a real nice coach,” Singleton said of Jinks, as the two have only just begun building a relationship over the past week or so.

As with many running backs across the country, Singleton’s initial thought about USC was tied to Reggie Bush. He said that he’d thought about USC during this recruiting process, but didn’t know if the Trojans would offer. Now, with an offer in hand, he said he’d look to visit the campus at some point. If that happens, he’d expect to take the conversation with Jinks more into how he fits into the USC offense.

It’ll be a difficult pull to get Singleton out of the state and then past the Buckeyes, Wolverines and Fighting Irish, but the 5-foot-11, 195-pound back said he’s open to heading elsewhere for school.

“I’m fine leaving home,” he said. “You have to leave home at some point in time. If that’s my school, I don’t really mind leaving to go across the country.”

Singleton said his family would like him to commit next spring, though he could potentially see waiting until his senior year. Of course, plenty could depend on when any potential recruiting trips can be taken.

With unofficial and official visits postponed due to the current dead period, Singleton said the uptick in recruiting has been a little tough to deal with, as his phone has been in fairly constant use. But coaches aren’t going to let up in recruiting a top-10 tailback in the 2022 class.

“My strength is my speed,” Singleton said when breaking down his strengths and areas he’d like to improve. “Coaches tell me about my speed and my cutbacks. As far as what to work on, just going through people. I don’t use my body a lot. I use my speed. I need to run people over more.”

USC continues to chase tight ends in the 2021 class, as the Trojans sent an offer out to three-star prospect JP Murphy (Danville, Calif./San Ramon Valley) late this week. The 6-foot-4, 220-pound prospect also has an offer from Arizona State.

The 6-foot-1, 190-pound athlete can play both safety and cornerback. The four-star prospect is the nation’s No. 16 athlete. He’s originally from Georgia and has already committed to and decommitted from Florida twice.

Momentum is moving toward Ohio State, and Wilcoxson has an official visit set to see the Buckeyes in June. USC hasn’t had a ton of success at IMG, but they did land Briton Allen in the 2019 class.

USC offered 2022 standout defensive tackle Travis Shaw (Greensboro, NC/Grimsley). He’s the No. 30 overall prospect in his class and Alabama, Florida, Ohio State, Oklahoma, Oregon and just about everybody else has already offered.

Lucas is a 6-foot-4, 280-pound defensive end, ranked as the No. 104 prospect in the country. Lucas has offers from both Arizona and Arizona State, as well as Michigan, Nebraska and Oklahoma.

Henderson is the nation’s No. 21 overall prospect and the No. 2 running back. He’ll be an extremely tough pull out of the state, as Alabama and Auburn are both all over him.