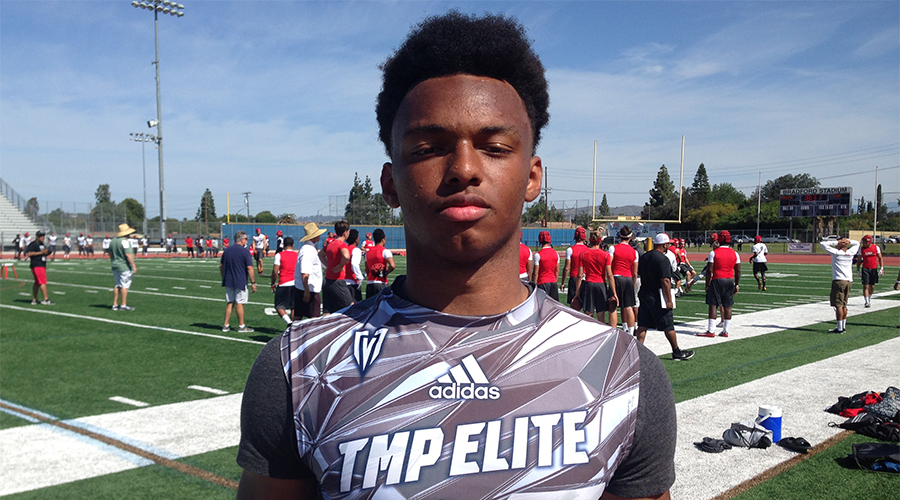 Highly touted Class of 2017 outside linebacker Addison Gumbs (Hayward, Calif./Stellar Prep) has been no stranger to the USC campus this spring, stopping by to see Head Coach Clay Helton and staff a total of three times, including less than two weeks ago for the Trojans’ spring game finale in the Coliseum.

“It was a great time,” said Gumbs, who has received a total of 24 offers from top programs from across the nation. “Every time I’m at USC I have a great time. I got a chance to talk to Coach Helton a little bit, the spring game was pretty good, and it was just a great all-around experience again.”

Gumbs is still wide open when it comes to his recruitment, but it’s safe to say that USC – which extended an offer his way in March – is certainly in the mix.

“It’s definitely a school I like a lot, a place where I can see myself for sure,” Gumbs said. “It’s a program I watched growing up – they were always my favorite team. The coaches all seem cool, so there’s a lot to like.”

A strong athlete with 6-foot-4, 215-pound size and a physical brand of play, Gumbs is primarily known for his exploits as a fierce pass-rusher coming off the edge at Stellar Prep, but with his blend of talents, the Trojans coaches are keeping an open mind when it comes to his potential future position on the defensive side of the ball.

“I talk most often to [Linebackers Coach Johnny Nansen] and both of the Coach Heltons [Clay and Tyson],” said Gumbs, who compiled 23 sacks as a junior. “They see me at every linebacker spot they have. They think I can be very versatile for them, so I like hearing that.”

Still, the Trojans have plenty of competition, and according to Gumbs, all of his suitors are still in play. In an effort to aid the decision-making process, the NorCal star has visited over a dozen schools this offseason, including Arkansas, Oklahoma, Ole Miss, Oregon, Texas A&M, UCLA and Washington among others.

“It’s been good seeing a lot of different schools – places I’ve never been to before, schools I’ve never seen,” Gumbs said. “It’s been a great experience.”

In Southern California this past weekend to accept his U.S. Army All-American Bowl invite at the Passing Down Best of the West 7-on-7 Championship, Gumbs found time to make a return-trip to UCLA – another program that he is heavily considering.

“That’s a school I like a lot,” Gumbs said. “[Linebackers Coach Scott White], he’s been recruiting me pretty hard, and I have a good relationship with all of the coaches over there. I have a good time every time I’m there.”

And Gumbs might not be done visiting schools yet.

“I may visit Nebraska or Iowa State, but I’m not sure,” Gumbs said. “I just want to go to a school where I feel comfortable with everything around me. I want to get a good blend of academics and football.”

While Gumbs has yet to release any kind of list of favorites, he has a strong desire to bring an end to the recruiting process prior to the start of his senior campaign on the field. In fact, a final decision is likely just around the corner.

“I plan on committing within the next couple of months, so I’m not going to wait around,” Gumbs said. “I expect to make a decision pretty soon.”