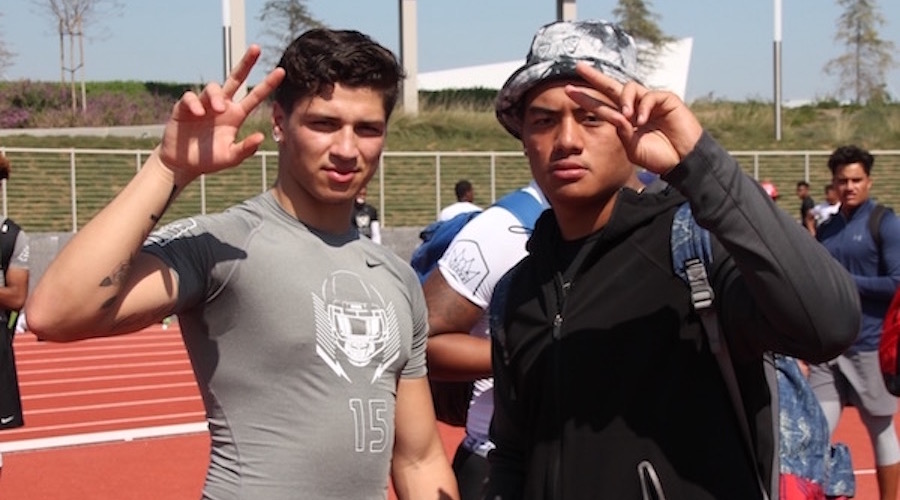 It’s still early, but with the May evaluation period just around the corner, here’s a quick look at where things stand with USC’s recruiting efforts and the Class of 2018. Potentially able to sign less than 20 prospects this time around, it might wind up being somewhat of a smaller class, but with six top-notch players committed already, and plenty of impressive names still on the radar, it isn’t likely to be short on talent.

With Corral in the fold the Trojans are almost certainly done at quarterback. Committing to USC over a year ago, he went on to have a fantastic junior campaign at Westlake Village (Calif.) Oaks Christian, passing for over 3,000 yards and 22 touchdowns with just three interceptions. Having transferred to Long Beach (Calif.) Poly this offseason, expectations are high for him, once again, as he’ll team up with superstar tight end/wide receiver target Camren McDonald. Corral did take an unofficial visit to Georgia this past weekend while in the area to participate in a camp, but by every indication he’s still all USC.

Having signed just one running back in each of the past two recruiting classes, it seems safe to assume that the Trojans would like to ink one or two more prospects here if possible, but with a new running backs coach in the fold at USC in Deland McCullough, it’s a tough position group to get a read on at this point in time. The Trojans have offered just two tailbacks from out West in Washington and Harrison – the latter of whom just received his offer this past weekend.

While the Trojans have reeled in plenty of talent at the wide receiver position as of late, the fact that they’ve already offered well over 20 prospects here would certainly appear to indicate that they will take at least two, if not three more from the Class of 2018.  The Trojans are already doing extremely well with Hall, the outstanding 6-foot-4 big-play receiver from right in their backyard. Cota is an intriguing name to watch. Most assume Oregon, where his father played, is in the drivers seat, but he’s been to USC on a number of occasions now, and his interest certainly appears to be genuine. Of course, all eyes are currently on St. Brown. USC appeared to be on the outside looking in when it came to his recruitment early on, but they’ve made up some ground in recent weeks.

Having just signed two tight ends, the Trojans are likely to take just one this time around at the most, and Clay Helton and Co. are doing particularly well with McDonald. A fantastic receiving threat, he’s long been known to have serious interest in USC, and the feeling is most definitely mutual.

The three players to keep an especially close eye on are Sewell, Angilau and Dedich, all three of whom visited USC this spring. Sewell, in particular, is thought to be particularly high on the Trojans, and he’s generally regarded as one of the top tackle prospects around. It will be interesting to see if USC comes harder after any other in-state prospects like Santa Ana (Calif.) Mater Dei’s Tommy Brown, who does not currently hold a Trojans offer.

The Trojans signed a stellar crop of defensive linemen from the Class of 2017, and with the verbal commitment of Letuligasenoa on Sunday, they’re off to a fantastic start for the Class of 2018 as well. A visitor at USC’s recent spring game, he’s generally thought to be the top defensive tackle in the west, and he chose the Trojans over Oregon, UCLA, Washington, Nebraska, Notre Dame and others. Odds are that USC will still take at least one more interior defensive linemen. Togiai is another highly touted prospect who is known to be high on USC.

In Calvert the Trojans have a prototypical outside linebacker in USC’s defense who possesses fantastic length, speed and an aggressive brand of play. Solomon Tuliaupupu is listed as an inside linebacker in this piece, but he could also conceivably end up on the outside – either at SAM or predator.  Wade, a possible predator target who could also wind up on the interior, was just on campus at USC this past weekend.

The Trojans have two of the best around committed here in Gaoteote – who can also play on the outside – and Scott. The question now is, just how many inside/outside linebackers do they want to pull in? Considering the talent that they’re still involved with, the answer is likely at least one, if not two more. Robertson and Tuliaupupu could be at the top of the list. Jack Lamb (Temecula, Calif./Great Oak) doesn’t hold an offer right now, but he’s a player who could be in the running for one.

The Trojans could wind up taking just one, or at the most two safeties in this class, and right now Crosswell and Hufanga are two players that they are doing particularly well with. Addison had planned to announce a decision recently, but backed out of those plans. The Trojans were not in his top 4 leading up to that original decision date, so it will be interesting to see if they make a push to get back in the mix. Tyreke Johnson is a high profile national prospect who has visited USC before, and he reportedly has legitimate interest in the Trojans.

The Trojans took two cornerbacks in the most recent class, but they probably would have actually liked to have taken one more, so it wouldn’t be a surprise to see them take up to 3 from the Class of 2018. Marcus Johnson has been an outstanding two-way player for Hawkins, but he likely projects to cornerback at USC. Trojans defensive backs coach Ronnie Bradford has told Taylor-Stuart that he’s the No. 1 target on his wish list, and the big name corner has admitted to having plenty of interest in USC as well, but there is a long way to go in his recruitment. The Trojans are also strongly in the running for Griffin, who is also looking at the likes of Nebraska, Oklahoma and Oregon.