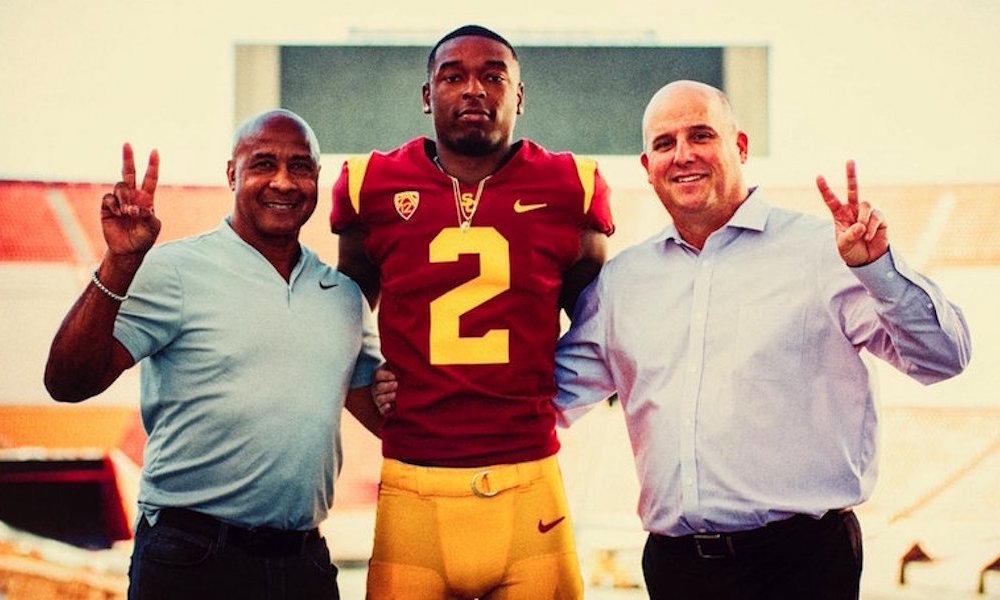 With a week to go until signing day it’s time to get a reset on where things stand with the remaining prospects on the class of 2018 wish list.

There are also four verbally committed players who have yet to sign; Trevor Trout, Tuli Letuligasenoa, Amon-Ra St. Brown and JT Daniels. All four have taken their official visits, Trout came during the season, Tuli in mid-January and Amon-Ra and JT were here this past weekend. Trout, St. Brown and Daniels all appear secure in their commits but Letuligasenoa will be going on a visit to Washington this weekend and Trojan fans should definitely be paying attention. The Huskies were the first school to get in on Tuli and he’s had a good relationship from the start, and you know the Dawgs would dearly love a little Tuipulotu-style payback with a late DT flip. When you add in the Kenechi Udeze coaching rumors it makes for a big situation to watch on this final weekend.

As for the uncommitted prospects not a lot has changed in recent weeks. We still don’t know exactly how many slots the Trojans have to fill because we don’t know if there are any remaining transfers, and right now the roster has no open spots so there would need to be players leaving in order for any additional recruits to come in.

The general thought is that there will be least four spots open up, and here are the prime candidates to fill those spots, along with where they stand in the recruiting process:

WR Devon Williams: Down to USC and Oregon. The Ducks were his early leader and he had a strong relationship with Willie Taggart, but once Taggart left it opened the door and the Trojans made a good impression with the official visit. Williams (photo above) visited Oregon last weekend.

OL Penei Sewell: There has been a lot of differing speculation on Sewell ever since he didn’t sign in the early period and it involved all three of his finalists; USC, Alabama, Oregon. The USC coaches made their final in-home pitch this week and now it’s a matter of waiting.

LB Solomon Tuliaupupu: Solomon took his official USC visit over the weekend along with Mater Dei teammates Daniels and St. Brown, and Gaoteote, a player he has gotten to know during the recruiting process. By all accounts the visit went well, and Solo will choose from USC, Ohio State, Oklahoma, Notre Dame and UCLA. I still think he will be a Trojan.

DB Olaijah Griffin: The Trojans would love to add at least one, if not two more corners for this class. Griffin had a good official visit recently to USC that put the Trojans in a solid position as they battle schools such as Tennessee and Alabama.

DB Isaac Taylor-Stuart: Like Griffin, Taylor-Stuart took a recent USC official visit but he is also casting an SEC glance at Alabama, Georgia and Texas A&M.

DB Julius Irvin: A versatile player in the secondary with NFL genes, Irvin will choose between a final three of USC, Alabama and Washington. And we won’t have to wait long to find out, he makes his announcement on Wednesday.

LB Eli’Jah Winston: It was viewed as an interesting offer when the Trojans made a late overture to Winston, a commit to the Ducks from an Oregon feeder school at Central Catholic, but Winston was a surprise official visitor to USC last weekend so there is at least some interest on his part.

Here will be the biggest storylines to watch on Signing Day

* The Trenches: USC loaded up in the trenches on both sides of the ball last year and it will be important to watch how things play out this year. Three would be a good number for the o-line and that means Sewell would need to come our way, and right now things are good on the d-line but if Tuli does get flipped to Washington it would literally be a huge loss in the middle.

* Cornering the Market: As mentioned earlier, the coaches would like to add multiple bodies in the secondary and they are in on a trio of really good players. You don’t want to get caught short of coverage men in the Pac-12.

* Finish Strong: If there is one thing Clay Helton has done extremely well in his first two years at USC it’s been finishing strong on signing day, and there are enough quality players still on the board to really fill out the class in a big way.