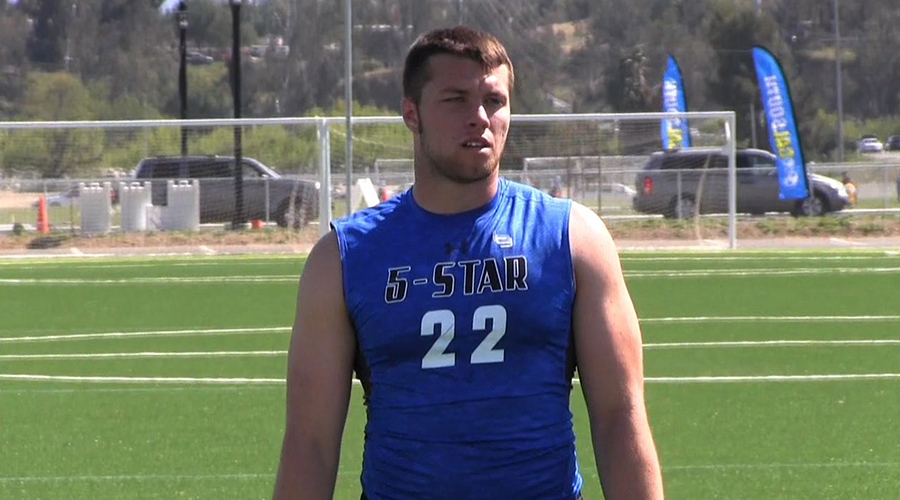 The Northern California edition of The Opening camp will be held on Sunday at DeAnza HS in Richmond and there are sure to be plenty of USC targets in attendance. Here are some of the top recruits we will be watching:

QB Jack Sears: His rise this spring has seen a lot of offers, including USC, and he will be looking to earn a spot in the Elite 11 finals. It will also be a chance to compare where he’s at on the same field with Tua Tagovailoa.

TE Jimmy Jaggers & Josh Falo: The tight end position is important for this class and it wouldn’t be a surprise to see the Trojans take two. Jaggers (photo, above) and Falo both have USC offers yet they have contrasting styles, Jaggers brings more size and a physical blocking element while Falo is more of a pass receiving option at the position. 2018 USC offer Camren McDonald will also be in attendance.

RB Najee Harris & Salvon Ahmed: Harris is one of the more physically impressive athletes in this class and stands out at virtually every camp he attends. The USC coaches are still pursuing the Alabama commit. Ahmed brings the explosive skills out of the backfield that the coaches love to see.

DL Greg Rogers, Jay Tufele & D.J. Johnson: This will be a chance to see three of the top DL on the USC wish list and hopefully we get some good match-ups in the 1-on-1’s against a solid group of offensive linemen. Rogers and Tufele are interior guys while Johnson is an end, and all three have held USC offers for a while now.

LB Addison Gumbs: The Trojans would love to add at least one more linebacker and Gumbs is a prime candidate along with Sampson Nui. Gumbs has a similar frame to John Houston, and while the USC staff is talking to him about playing any of the linebacker spots it’s easy to imagine him as an OLB coming off the edge. 2018 offer Merlin Robertson is also part of the linebacker group.

CB Jaylon Johnson: Corner is such a huge position of need in this class and Johnson remains one of the top targets on the wish. I’m anxious to see how he stacks up against the Los Angeles camp group of corners that included Thomas Graham, Deommodore Lenoir, Jaylon Redd and Greg Johnson. Other DB’s to watch include Trojan offers Brandon McKinney and 2018 Jaiden Woodbey.

WR Randall Grimes: The USC commit looked good last weekend at the Redondo 7-on-7 with a tall frame and nice athleticism.

OL Aaron Banks, Popo Aumavae & Andrew Voorhees: All three of these linemen hold USC offers so it will be a great opportunity to watch how they compete in the same setting.

The Trojans are still looking for a quarterback in this class and two of the players being considered were in action last Saturday at the Dana Hills Air Strike tournament in Sears (San Clemente) and Chase Garbers (Corona Del Mar). Both are in the same size range (6-3, 200), threw the ball very well and were clearly the leaders on the field during 7-on-7. Sears is the one with a USC offer right now but Garbers is scheduled to make a campus visit soon.

1) Bubba Bolden now calling himself a soft commit – The safety from Bishop Gorman said he needs to build more on his relationship with DB coach Ronnie Bradford to feel completely comfortable with USC but he also told Johnny Curren that Clancy Pendergast visited the school last week to assure Bubba that he was still a part of the USC plans.

4) 2018 OL Curtis Dunlap (IMG Academy) got offer and will attend Rising Stars Camp: Dunlap will be a national recruit and the USC coaches get a shot to make an early impression next month at the RSC.

5) 2019 RB James Cook, cousin of Jamel, gets an offer: Cook is currently an FSU verbal with a brother who plays RB for the Noles but there will be a family connection now at USC too so you never know what can happen.