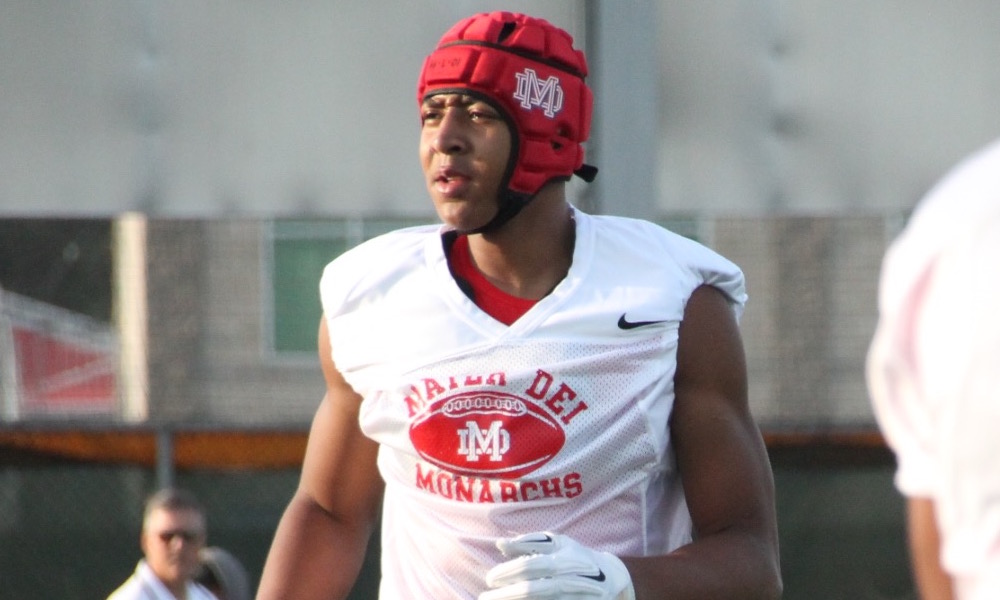 Randy Taylor from National Preps was on the WeAreSC podcast last week and talked about some of the new names that jumped out to him during the spring evaluation period:

The first guy I want to mention, and I know SC has offered, is Korey Foreman from Centennial, a freshman 2021 kid. Defensive end-type kid, 6-3, 240 pounds, long and athletic, he was kind of the talk of the college coaches who were there. He was a really, really good player. Coach Udeze was out there for USC and got a first-hand look at him, as well as Drake Jackson (a 2019 Centennial DE that USC has offered). At Centennial, Gary Bryant is a 2020 athlete, slot receiver with speed, he was impressive.

At JSerra, there is a kid named Jeff Percy, a 2020 kid who hasn’t played much football, he was a tight end last year at Mater Dei but as soon as he figures out how to bend his knees and kick step he’s gonna be an offensive tackle that a lot of people are going to offer. They also have a center, Jack Harlow, the son of the coach Pat Harlow, and he has a chance to be this year’s Justin Dedich. I don’t know if he’s at that level right now but he’s 6-2, 280 and he reminds me of Dedich with his good technique and power. He plays defensive tackle too and some schools are looking at him as a three-technique. I was also impressed with Chris Street, the 2020 running back who transferred from Mater Dei, and 2021 CB Zamajay Duncan.

Santa Margarita has a real good athlete named Connor Bane, he’s 6-4 and it’s almost Asa Turner-type length to where you could see him putting on weight and ending up as a linebacker.

San Clemente has a real good 2021 running back, James Bohls, a 6-2, 200 pounds kid. He’ll pop up on everybody’s radar here real soon. He kind of has a Marcus Allen-build, that long frame, he could probably play safety or linebacker but he also has speed, track speed. More of a slasher than a juke guy, can stick his foot in the ground and make guys miss. He was fun to watch.

Another guy I want to mention is Tristan Sinclair from San Ramon Valley. The more I see him, the more I like him. And I know SC has offered.

The Mater Dei showcase had so much talent, including a lot of good players that people aren’t talking a lot about. They have a defensive tackle, a transfer named Evan Bennett, a 6-3, 300 guy from Northern California who is a two-gap guy, he’s not the quick first-step guy, he’s more the guy who plugs up the middle. I think he’s a guy that will really start to get more national attention because of his stoutness. They have Kyron Ware-Hudson, a 2021 wide receiver who is built nothing like his brother (DT Keyon Ware-Hudson). He’s about 6-2, 190 pounds and just looks like a football player, he could probably grow into a linebacker. They do have a 2021 linebacker Raesjon Davis who is one to watch. They are just loaded, it was like watching a college practice.

Probably my favorite guy to watch of this winter/spring/summer has been Michael Martinez, the tight end from Mater Dei. Well, the tight end, maybe offensive lineman. He is more of a freak than most I’ve ever seen because of the things he has. The size 19 shoes that make him look so unorthodox, or awkward, but still he’s growing into this huge body. As a tight end he shows excellent body control and positioning, he runs good routes and he catches the ball well. If you have a kid like this and he ends up being 270 pounds how do you cover him? And he could easily carry 270 pounds. He’s at 250 now and he’s got room to grow. Or he stays at 250 and continues to develop. His hands are unbelievably huge, the distance from his knee to his ankle I’ve never seen anything like it. And he’s such a great kid. I’ve been watching him since the 8th grade and he could barely walk and chew gum at the same time but now the muscularity and coordination starts to kick in. I can’t think of anyone I’ve watched for four years who started at that point and has turned out like this. I know SC only offered a few weeks ago but they had to do their own evaluation because of the way he’s still developing and growing, you’ve got to pay a little bit more attention. Obviously you see the size and the length and the other physical things but what you don’t get right away is that he has a finesse to him running routes, he does a great job creating separation with his huge body, he knows how to lean his body at the top of the route, and his catch radius is remarkable. When you see all these things you think ‘I’m gonna be watching this guy on Sunday’s’ and it might even be at offensive tackle. At this point, you just take him.