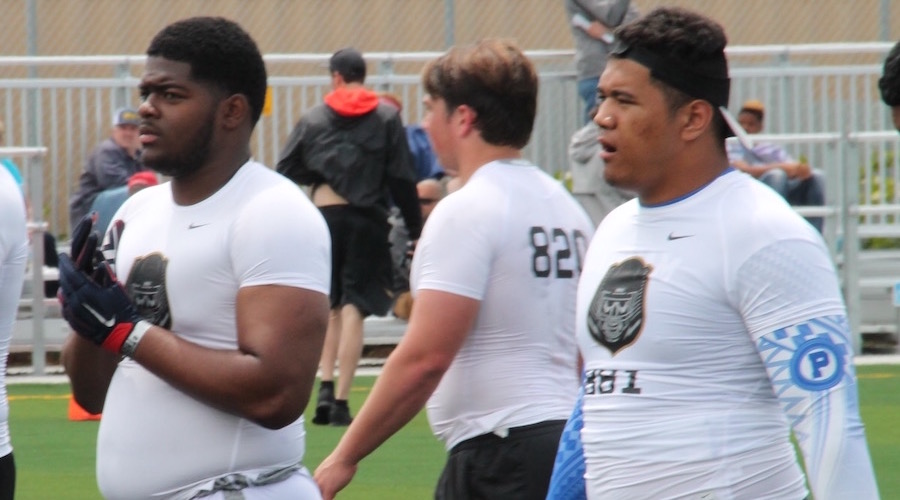 The interior of the defensive line is arguably the top priority for this recruiting class and a pair of the top prospects on the USC wish list were in action on Sunday at The Opening camp, and they were as good as advertised.

Greg Rogers and Jay Tufele are certainly known commodities as top 10 players at their position so it was no surprise to see them both earn invitations to The Opening finals in July. The thing that impressed me the most about Rogers and Tufele on Sunday was their power and aggressive style. These are two guys with plenty of bulk, pure interior guys not edge players who need to add weight to move inside, and yet they both move so well.

After the camp we talked with the defensive line coach Chuck Wiley, a former teammate of Kenechi Udeze with the Minnesota Vikings, to get his thoughts on the strengths of each player.

“First off, it was one of best DL groups we’ve seen this year and Jay Tufele was our MVP,” Wiley said. “Jay has great explosion off the ball. Great use of his hands. Moved around well and had fluid hips. Such a good athlete. Physical, violent. He has a standard swim move that he reverts to a lot.

“With Greg Rogers it didn’t seem fair at times with the way he was manhandling the centers. He’s thickly built but not overly muscular yet. He’s the kind of guy with his strength who can really anchor down a line. Power is his thing and with his size he can still get off the ball well. When he uses his hands he’s almost unstoppable, guys just bounced off him.”

It was a reminder that this is one of those rare years with some elite defensive tackles on the west coast. Not only did Rogers and Tufele look good at the camp but so did Marlon Tuipulotu, a Washington commit who had an SC offer, and earlier this spring we saw Martin Andrus and Haskell Garrett at the Redondo camp and they were both legit.

With the Trojans needing to add at least two (ideally three) players along the interior this is a great opportunity to take advantage of a pretty deep group.

Both players have USC on their short list of schools right now. Rogers is listing schools that include USC, ASU, AZ, Michigan, Notre Dame and Oklahoma while Tufele is mentioning USC, UCLA, Utah, Ohio State and Michigan, among others.

A recent USC offensive line offer went to Andrew Vorhees from Kingsburg and he was also at The Opening camp.  Vorhees carries a 6-6, 290 frame, showed good fundamentals as a tackle, and currently has 16 offers with the Trojans being the most recent. He will make a USC campus visit in June, it will just be an unofficial visit, not for a camp.

“I talk a lot with Coach Callaway, sometimes Coach Helton,” Vorhees said. “The USC program speaks for itself, the history. I’m not leaning any way right now, just narrowing things down.”

Other recruiting notes from the Opening camp:

* Two of the top tight ends on the SC wish list are Josh Falo and Jimmy Jaggers. Falo is listing USC along with Oregon, Washington and Michigan while Jaggers has USC, UCLA, Washington and Florida as his top choices.

* A name to watch for the future is De La Salle class of 2019 tight end Isaiah Foskey, who already has offers from Michigan and BYU.

* Jaylon Johnson is a top priority at corner and he is proving to be one of the best athletes in the country, at least when judging by the SPARQ testing. His score of 132.42 was the highest of any DB nationally this year. He is listing USC and Arizona as the schools he talks with the most right now, and he took his only unofficial visit of the spring to a USC practice at the Coliseum.

* Aaron Banks took part in the camp as a tackle but at 6-6, 344 he is most likely a guard at the next level. He is listing the Trojans along with Michigan, Nebraska and UCLA. Jalen McKenzie is definitely a tackle and he could be a real wild card as a relative unknown commodity (sat out soph year as transfer, injury cost him jr year) with tremendous potential. Dad played at Tenn and brother is there now, but also mentioning USC, AZ, LSU, Mich and Oregon.

* Jack Sears continued his impressive spring as he was named QB MVP, earned an invite to the Elite 11 finals and posted a 122.58 SPARQ rating, the 3rd highest at the event. USC, UCLA, Cal, Washington and Texas A&M.

* Najee Harris put on another impressive performance while earning a second trip to The Opening finals. He said the Trojans are still pursuing him, as are other schools such as UCLA and Cal, and the thought is that anything is possible for Harris between now and signing day. Another Alabama commit, QB Tua Tagovailoa, says he still plans of taking official visits, so you never know what could happen there as well.