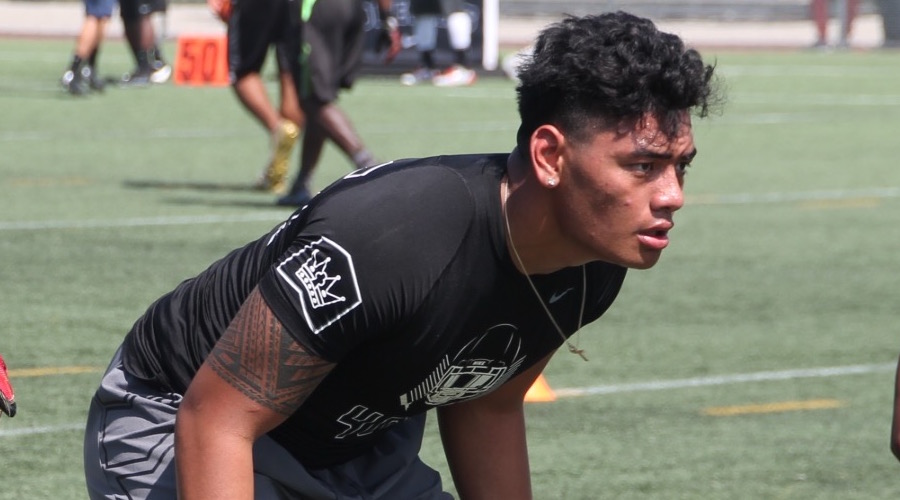 Now that the spring evaluation period has ended, here’s one early look at how the Class of 2018 could break down for the Trojans (obviously there is a long way to go before signing day and we’ll see plenty of movement on this list between now and then). Also, we’re working off a projection of 18 available rides (that number is flexible based on transfers, early draft entries, program departures, etc.)

The Trojans are set here with Corral, who won the strong arm competition at the Steve Clarkson camp over the weekend with a long throw of 70 yards, and who also brings running skills and plenty of production as he enters his 4th year as a starting QB. Matt is 6-2, 195 and the comparison I’ve liked the most is when Johnny Curren mentioned Mark Sanchez, primarily because of how hard Corral throws and their similar presence on the field.

There isn’t necessarily a need to take a tailback in this class but it’s clear the coaches would prefer to have one, especially if it is Salahuddin. This makes a nice first opportunity for Deland McCullough to test his recruiting chops on an elite back from across the country. Mychale is 5-11, 190 and brings that rare combination of explosiveness and power as a runner. So far he is mentioning the Trojans on a short list that also includes Oklahoma, North Carolina, Maryland, Nebraska, Arkansas and others.

This would be a pretty ideal pairing. St. Brown (5-11, 190) has been the best player I’ve seen this spring regardless of position and he would fit right in as a slot receiver for the Trojans who could also play outside. The Trojans are considered a longshot as they face a legitimate recruiting battle with Stanford and Notre Dame among others (there is a St. Brown brother on both rosters) but Amon-Ra is paying attention to what’s going on at USC right now and that’s all we can ask for at this point. Hall (6-4, 190) will be on the receiving end of passes this fall from a USC commit in Corral, and he is close with his former Hawkins teammate Joseph Lewis, an incoming Trojan receiver. I like the SC chances for Hall, who brings height and long arms as a strength of his game.

Do you notice a theme here from LB Poly? The Jackrabbits could be very explosive on offense this year and it could be fueled by a trio of future Trojans. McDonald is a classic pass-catching tight end at 6-4, 205 and he’s considered a strong possibility to end up at SC.

This could be a flex position in terms of numbers, as I see the coaches taking two offensive linemen but it could end up being three. I’ve really been impressed this spring with the way Sewell has looked better each time I’ve seen him, and a lot of that has to do with the way he’s gotten more fluid in his agility for such a big man at 6-4, 340. Penei is still taking a long look around at schools like Oklahoma, UCLA, Arkansas and others but by all accounts the Trojans have a solid shot. Brown does not currently have an SC offer but at 6-6, 315 he has the size that will continue to warrant a look through the season, and it wouldn’t surprise me at all if an offer eventually comes. As for a potential third body on the o-line, I could see the coaches making room for someone like Justin Dedich, or an out-of-state surprise such as Jackson Carman.

I could see this being a flex position too. The Trojans will be adding a JC transfer in Dillon Faamatau (currently scheduled to arrive mid-year but still trying to be here in fall) in addition to Letuligasenoa, so there is definitely a continuation of big bodies to the interior of the USC defensive line. I would be fine if those two were the only newcomers but, as above with someone like Dedich or Carman, what happens if a Trevor Trout decides he wants to come to SC? You do what you can to find a spot and that’s when we could see some extra scholarships on the lines.

There is an old saying “fish where the fish are” and this year the recruiting pond is stocked at linebacker, so expect the Trojans to load up at the position. There is already a very good base, led by Palaie Gaoteote, who might be the best defensive player in the class, along with Raymond Scott and Bo Calvert. I can see the coaches adding two more, and the duo of Tuliaupupu and Latu would finish off a versatile class that features options to play inside and outside. Scott is an inside guy, Calvert and Latu are outside edge players while Palaie (photo above) and Solomon could end up at multiple spots. This could end up being a terrific group, and if there is a way to get greedy and add Merlin Robertson I would like to do that too.

This trio of corners would offer a nice mix of skills to the rotation. There just aren’t many corners at 6-2 who run a 4.43 but that is what Taylor-Stuart brings to the table while Griffin is a solid 6-0 and is looking to be a recruiting battle between the Trojans and Ducks. Addison is another intriguing size option at 6-4, which would fit with what the SC coaches are looking for at safety.