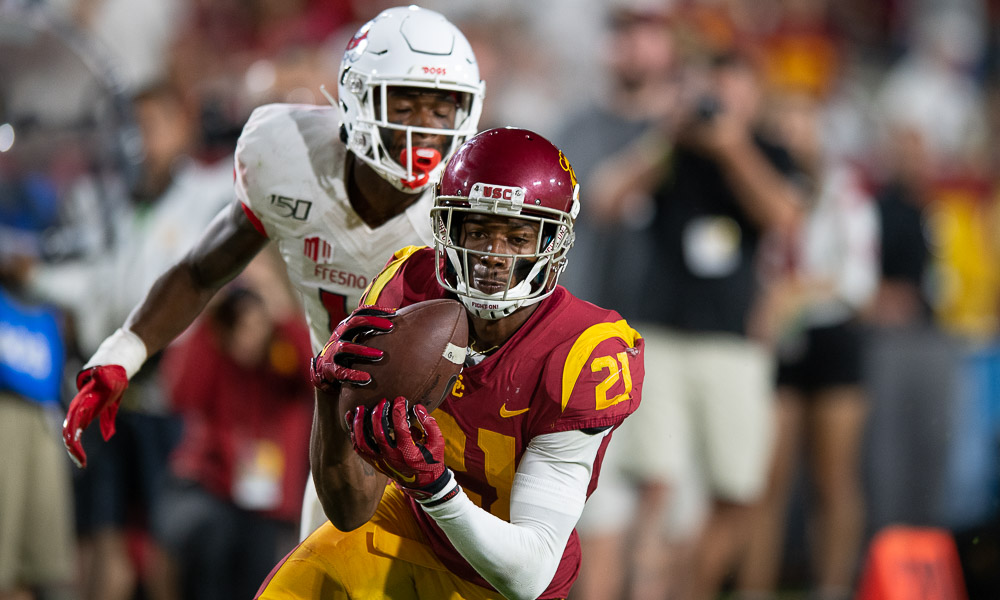 Tyler Vaughns stands alone at USC as the last wide receiver left from the Trojans’ six-man haul at the position in the 2016 recruiting class. If he’s given another opportunity to take the field at USC, he could ultimately stand alone among USC wide receivers all-time.

Vaughns finished the 2019 season just 63 receptions behind Robert Woods’ 252, the all-time USC record for career receptions. Vaughns caught 74 passes in 2019, and without Michael Pittman on the roster anymore, Vaughns would have a great chance to haul in the necessary receptions in his final season to set a new program record.

It would be a remarkable story arc for Vaughns, who began his football career at eight years old, and just one year removed from getting hit by a car–an injury that required a year’s worth of physical therapy and a year away from sports. Before that, Vaughns played baseball–a sport his father played at Long Beach State–but watched his two older brothers and a cousin play football in high school.

“That’s when my whole love for the game happened,” Vaughns said.

He continued playing baseball, basketball and football through high school, but said he shifted to football as his main sport during his senior season. Though, had things been different, he would have played baseball at USC as well.

“I didn’t get to play baseball at USC because each spring there was something new going on with the football team,” Vaughns said. “I had to try to win a job, or we had a different offense we needed to learn.”

Vaughns sitting atop the all-time list of USC pass catchers might be a surprising finish for some, regarding a career that began with just one catch for eight yards in his first game as a redshirt freshman. But for Vaughns, making his way to the top of any list when it comes to wide receivers has been a consistent goal for years. He said it dates back to his time at Bishop Amat, where he made every effort to get his name on the all-time receiving lists for the Lancers and did indeed set a single-season record with 83 catches during his junior season.

The goals were the same when he stepped on campus at USC. He moved into ninth place on the all-time receptions list last season and now has a clear shot at No. 1.

“It would mean a lot,” Vaughns said of the record. “It shows what I’ve been working on and trying to achieve. When I came here, I wanted to be the best receiver to play at USC, so I’m still trying to achieve a goal I set at 18.”

Vaughns has had plenty of highlights during his USC career to this point. He said his first start–against Washington State in 2017–holds a special place for him, as does his six-catch, 119-yard performance against Ohio State later that year. Games against Arizona State in 2017 and 2018 will be remembered as well, as the 2017 version was Vaughns’ first two-touchdown game and in the 2018 game, Vaughns returned a punt for a touchdown, caught a 48-yard score and threw for a touchdown as well.

“I’d been asking the coaches to put that play in for so long,” Vaughns said of his pass to Michael Pittman for a touchdown. “I kept telling them, ‘I can throw it. I swear.'”

Plenty of hard work has gone into Vaughns’ production to this point, but the summit coming so clearly into view has provided some extra motivation since the end of last season.

“I know exactly where I am with my stats,” Vaughns said. “I didn’t always know, but I know what I’ve done to this point in time. And as far as me hearing it every day–it’s up on my wall, it’s on my phone screen, anytime I talk to a coach, they mention it to me. I have that goal.”

But a goal that looked so attainable back in February is now surrounded by question marks. The Pac-12 announced that it won’t play a fall sports season due to the coronavirus pandemic, which means USC football likely won’t play games until January or February at the earliest. If that happens and it’s a significantly shortened season, Vaughns might not have enough opportunities to collect the required number of receptions. And at that point, he’d have a decision to make regarding the 2021 NFL Draft. Under normal circumstances, he’d exhaust his eligibility at the conclusion of this fall season. Now, the NCAA has ruled that he and other seniors have the option to return for the 2021 season–provided the school allows for it–and not count against the school’s scholarship limit.

It has been a frustrating and confusing situation for all those involved, but Vaughns has stayed on track throughout all the will-they-won’t-they discussion about potentially playing a 2020 season. He said that right now his major focus is on finishing his degree, as well as staying focused on a potential spring season.

“We try to keep our routine like we have our games on Saturday,” Vaughns said. “I would love to play in January or whenever they say we can play, so I’m preparing my body, my soul and my mind for that.”

USC announced late this week that it would pause football workouts until Monday due to eight positive Covid-19 tests among the football and men’s water polo teams. But the USC athletic department had gone three weeks in a row without a positive test before that. The return of those workouts meant a lot to Vaughns and the rest of the players, who have done well to stay the path during this time.

“It wasn’t too nerve-wracking because we’re all in the same situation,” Vaughns said regarding the uncertainty of a fall season that lasted from March until earlier this month. “It wasn’t anything we could control, so we had to let it play out for itself and always have a plan for different obstacles. In time, we’re going to get through this.”

Vaughns said the team has become closer over the past several weeks, when they’ve been allowed back on campus. He said a lot of players didn’t see each other for three months during the initial shutdown.

“I call some of these guys brothers, so being at workouts has been great,” Vaughns said. “And we work hard to compete against each other. Our team feeds on that, when we try to make it us vs. us at all times.”

As if not playing this fall season wasn’t frustrating enough for the USC players and fans, there’s another level to that for the offensive players due to the excitement around this offense–the second year in Graham Harrell’s offense with Kedon Slovis back behind center and just three of the 11 starters gone from the 2019 offense.

“It could be real dangerous,” Vaughns said of the Trojans’ offense. “We’re a very explosive team with the weapons we have. Our running backs and wide receivers complement each other and we have a lot of different skills and sizes, but we’re all athletes who can make plays.”

Of course, whether Vaughns even sees the field again as a Trojan is still up in the air. If there is no spring season, Vaughns will have a decision to make on the upcoming draft. Already, USC defensive tackle Jay Tufele has declared that he will sit out whatever form the upcoming season takes and has made himself eligible for the draft.

“Jay’s situation is completely different than mine,” Vaughns said. “In that sense, I’m waiting on if we are having our season in January. Just to clear my head about everything to make sure, I’m going to be patient about everything.”

He’ll have plenty to think about when it ultimately comes time to make a decision, but there is no way to set the all-time USC receptions record once he’s in the NFL.

His next catch will tie Steve Smith at 190 career receptions. He needs 18 to tie his position coach, Keary Colbert, at 207. From there, it’s more USC wide receiver royalty, with Juju Smith-Schuster, Dwayne Jarrett, Marqise Lee and then Woods checking in from fourth to first.

“That record still weighs heavily, I’m not going to lie to you,” Vaughns said of what will go into the ultimate decision. “It’s not self-pride. I want to show my work to the world and I want to give my best before I leave here.”