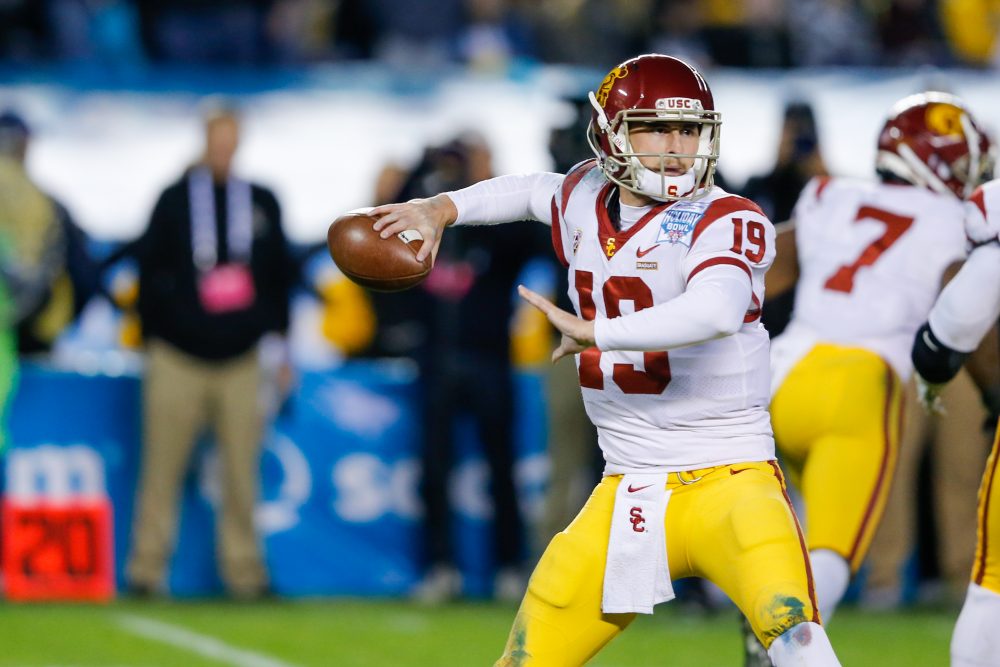 Monday was a fairly busy day regarding the USC Trojans, as news came that Matt Fink was done with football, the Trojans continued adding to its support staff, a number of offers were extended, a few new videos hit the web and the men’s basketball team gears up for the Pac-12 Tournament.

USC will be without backup quarterback Matt Fink for the 2021 season, as the veteran signal caller has elected to focus on pursuits outside of football. Fink came to USC in the 2016 recruiting class and served as a backup quarterback from the 2017 through 2020 seasons, playing behind Sam Darnold, J.T. Daniels and Kedon Slovis. Despite playing in just 16 games and starting one over his career, Fink was a program leader, a hard worker and very well respected within the program.

He’ll be remembered fondly by USC fans for two on-field performances specifically. The first was a fun 51-yard touchdown run against Oregon State in the 2017 season. It was his first career carry and the longest run by a USC quarterback since the 2001 season. The second was one of the great memories of the last decade by a USC quarterback, when he stepped onto the field following the game’s second play against Utah and proceeded to throw for 351 yards and three touchdowns in leading an upset win over the No. 10 Utes.

USC had just two scholarship quarterbacks on the roster last season, in Slovis and Fink, following the transfers of both Jack Sears and Daniels. Fink could have returned to USC this fall and taken advantage of an NCAA rule allowing an extra year of eligibility for all student-athletes, but he’s elected not to take that sixth season.

USC will put former Vanderbilt quarterback Mo Hasan on scholarship, after he served as the No. 3 quarterback last season as a walk-on. Hasan underwent surgery for compartment syndrome last season and was unavailable for much of the year. Hasan has some playing experience, leading Vanderbilt to a win against Missouri in 2019, so he does provide some backup insurance as someone who can take snaps and handle himself in case Slovis gets injured or the Trojans want to pull him from a game early.

But the biggest change at the quarterback position this year is that USC now has a veteran quarterback as well as two true freshmen that the coaches will need to fairly quickly prep to potential take over as the starter. It’s been a while since that has been the case at USC, as Daniels immediately became the starter as a true freshman in 2018 and Slovis was forced to do the same in 2019, and there were no young quarterbacks on the roster to develop last season.

This year, the development of incoming freshmen Miller Moss and Jaxson Dart will be one of the more important, potentially unseen aspects of the season. If this is to be Slovis’ final season at USC, as he’ll be eligible for the 2022 NFL Draft, that starting job likely will be grabbed by either Moss or Dart. While Fink would provide someone who has done the job of a backup before to varying levels of success, allowing the true freshmen to even get a couple of snaps this season and some live action could be a better use of that time for the future of the Trojans.

Fink’s departure was first reported by Ryan Young, of TrojanSports.com.

C.J. Ah You added to the staff

USC continued to add to its stable of support staff on Monday, as the Trojans announced the addition of C.J. Ah You as a Quality Control Analyst.

Ah You played defensive end at BYU and Oklahoma and will assist with that position group for the Trojans. He was a seventh round draft pick of the Bills and also played for the Rams.

He coached the defensive line at Vanderbilt for several seasons and was most recently coaching in the XFL for the New York Guardians.

The Ah You name is well known in football circles, especially in the West region and he will be another major addition as a recruiter as well as a football mind.

Ah You joins Bryan Carrington and John Bonney as Quality Control Analyst additions this offseason, as the Trojans needed to replace Hayes Pullard and Chris Claiborne, who left for the New York Jets and Arizona State, respectively.

A flurry of offers go out

USC extended at least five scholarship offers on Monday, as the Trojans got in early on one Texas defensive tackle and joined the race for some national prospects.

The offer that might mean the most eventually went to 2022 athlete Anthony Jones (Henderson, Nev./Liberty), a 6-foot-5, 242-pound two-way prospect whom the Trojans offered as an outside linebacker. Jones and two other high school teammates made early commitments to Washington, but he and defensive tackle Sir Mells have backed away from those commitments, as they would like to explore other options before making a commitment. USC previously offered Mells, but with those two having a close relationship and already making one commitment together, it’s likely a stronger pitch if both hold offers from the same school.

The USC offer is a big one for Jones, as he said he comes from a family of USC fans and his cousin is former Trojan receiver Robert Woods. USC signed just two linebackers in the 2021 recruiting class, after none in 2020, so that’s a position where bodies are needed, with injuries and uncertainty dotting the roster at the moment.

USC defensive line coach Vic So’oto sent out a couple offers in Texas. The most notable went to 2022 defensive tackle Syncere Massey (Cedar Hill, Tex./Cedar Hill). The 6-foot-4, 285-pound big man has been very lightly recruited in terms of scholarship offers to this point, as Liberty, Utah State and Western Kentucky were his only offers before the Trojans stepped in. USC has begun expanding its pool of defensive tackle offers, and it’s always interesting when a big school becomes an unranked recruit’s first offer. UCF was quick to follow with an offer following USC, and it wouldn’t be surprising to see Massey go on a bit of a recruiting run now that USC has offered.

So’oto also offered 2023 defensive end Dylan Spencer (Katy, Tex./Taylor), a 6-foot-5, 245-pound end with in-state offers from Baylor, Texas and Texas A&M. The Trojans have been good about getting in early with prospects in the 2023 and 2024 classes this offseason, and this staff is full of recruiters good enough to build those relationships quickly to generate real interest in prospects from out of state. It will be fascinating to watch this summer, whenever the dead period recruiting restrictions are lifted, just how many recruits visit the USC campus for officials and unofficials.

Preston is the nation’s No. 69 overall recruit and the No. 10 wide receiver. A number of SEC programs are involved, with Alabama and LSU chief among them, but it won’t be surprising to see the Trojans explore the relationships that Jeff Thomas, former LSU staffer and new USC Director of Scouting and Player Relations, has down in that area.

Young is the No. 1 running back and No. 18 overall prospect in his class, and already holds offers from just about everybody. Alabama, Auburn, Florida, Georgia, LSU, Miami, Notre Dame, Ohio State, Oklahoma, Oregon, Texas and just about any other program that has played a meaningful game over the past decade have offered the 6-foot, 190-pound back.

With spring ball canceled last season and the Trojans unable to use the weight room for so much of the summer, the players have embraced this time to do everything they can to get a head start on the 2021 season and make up for any time missed last year.

In USC’s Walk the BLVD series, which gives a glimpse into the thoughts and personalities of some of USC’s to players, safety Isaiah Pola-Mao stepped in front of the camera.

Pola-Mao returns to USC as the leader of a secondary that needs to replace Talanoa Hufanga, and improve its success rate in making drive-altering and game-changing plays, according to safeties coach Craig Naivar. Pola-Mao said he’s looking forward to accepting that challenge and has high hopes for the USC defense in 2021.

Technically the field was set Sunday, but here’s another reminder that the Pac-12 Men’s Basketball Tournament is set to tip off on Wednesday, with its three first-round games.

USC is the No. 2 seed and will meet the winner of the Utah – Washington game on Thursday at 5:30 pm. USC won its two games against Washington by a combined 42 points this season, while the Trojans beat the Utes by 18 at home but lost by 10 in Salt Lake City.

Unfortunately for the Trojans, they are on the same side of the bracket as No. 3 Colorado, which has beaten USC six straight times.