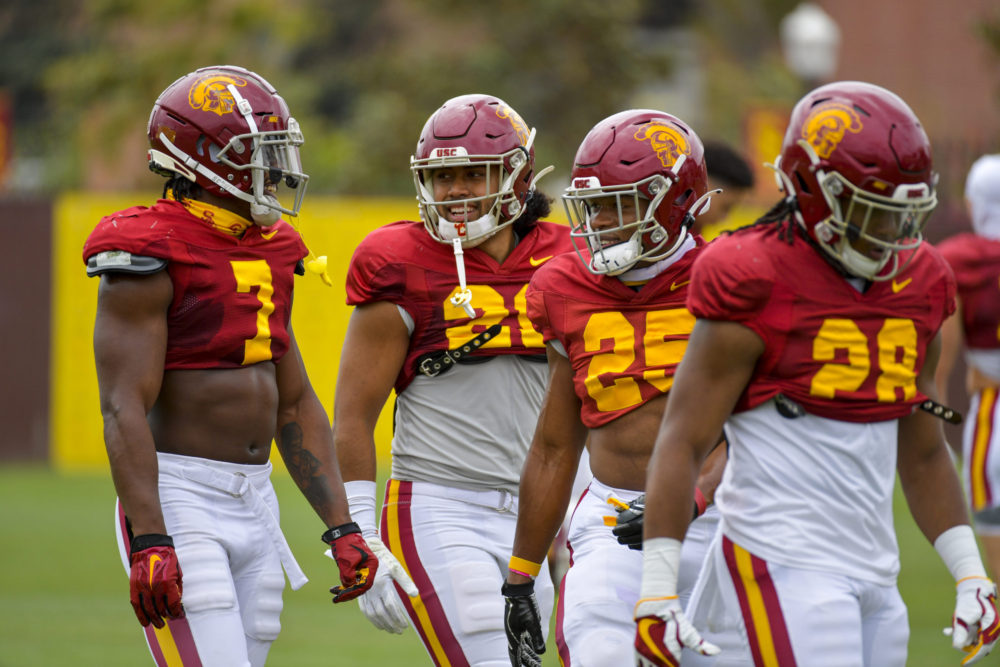 USC will have another chance to reel in a running back named De’Anthony, though the circumstances this time around are very different than when the Trojans lost a commitment from five-star De’Anthony Thomas all the way back in 2011.

This time, it’s three-star back De’Anthony Gatson (Newton, Tex./Newton) the Trojans are pursuing and USC is among the final five teams for the 5-foot-10, 200-pound back. Colorado, Iowa State, Minnesota and Texas are the other teams involved.

Gatson was extremely productive as a junior last fall, rushing for 1,974 yards and 29 touchdowns in just 10 games. He averaged more than 12 yards per carry and caught six passes for 97 yards and two scores as well.

USC is likely looking for at least one running back in this 2022 recruiting class and several bigger-back options are in the mix, including Gatson. The Trojans offered back in March and Gatson has an official visit scheduled for June. Colorado is also scheduled to receive an official visit, but it’s Texas that’s worth watching in this race. The Longhorns have long been the favorite program for Gatson, but an offer didn’t come until early May. Texas has a couple of major running back commitments in 2022 four-star Jaydon Blue and 2023 five-star Rueben Owens.

USC’s running back position has undergone some significant changes since the end of the 2020 season. Gone are Markese Stepp and Stephen Carr, with Stepp landing at Nebraska and Carr at Indiana. Arrived are Texas transfer Keaontay Ingram and true freshman Brandon Campbell. The Trojans are set to lose Vavae Malepeai and Quincy Jountti following the 2021 season, and Ingram could be one big season away from declaring for the NFL draft. Even if Ingram returns, USC would only have three scholarship tailbacks on the roster for for the 2022 season, meaning multiple additions at the position — through the transfer portal or via high school recruiting — seems necessary in this class.

Four-star Raleek Brown (Santa Ana, Calif./Mater Dei) made an early commitment to Oklahoma, but USC will likely get an official visit from him. Five-star back Gavin Sawchuk (Littleton, Colo./Valor Christian) has been to USC on an unofficial visit and will be back for an official visit in June. He’s another potential Oklahoma commitment, but the Trojans will have a shot. Four-star back Jovantae Barnes (Las Vegas/Desert Pines) has been a top USC target at the position for a while, though both Alabama and Oklahoma are involved. Four-star TreVonte’ Citizen (Lake Charles, La./Lake Charles Prep) could be LSU’s to lose, but he’ll be on USC’s campus for an official visit in June. Three-star Justin Williams (Dallas, Ga./Paulding) is another 6-foot, 200-pound back with a USC offer. And much closer to home, big back Tomarion Harden (Inglewood, Calif./Inglewood) and dynamic playmaker Rayshon Luke (Bellflower, Calif./St. John Bosco) both hold USC offers.

How USC uses its running backs this season could go a long way toward what kind of talent the Trojans are able to bring in at the position. USC finished last in the Pac-12 in rushing last season, averaging fewer than 100 rushing yards per game. The Trojans have serious attention from quite a few backs, and should be able to present a favorable depth chart when it comes to potentially earning early playing time