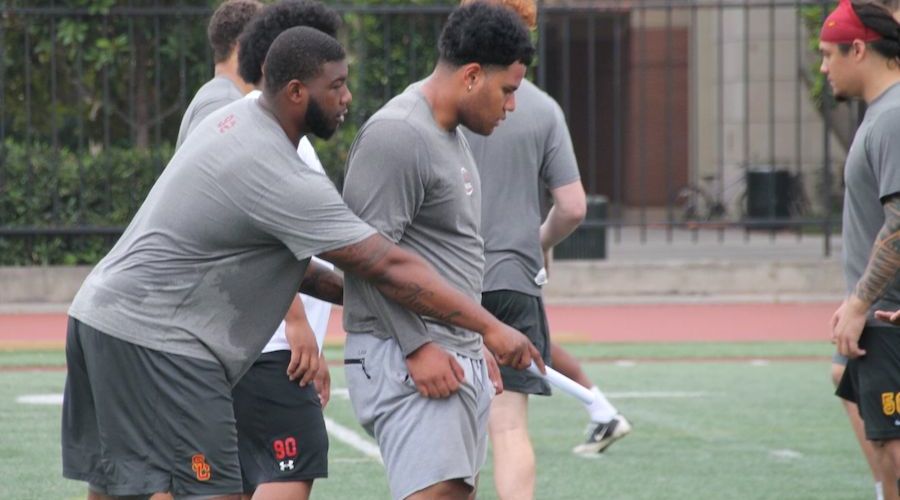 We learned a lot this summer from these sessions and now that there are only a couple remaining, here are some things that stood out:

* This was a chance to see Max run things as he was the “de-facto” leader of the workouts and he did a great job in that role. If it was my choice, I would still name Max as my starter but Sam continues to show enough flashes of special play that I can’t rule out the chance he gets the job. Can’t wait to see how things progress in camp.

* I loved seeing Justin Davis get the praise from S&C coach Ivan Lewis about his work ethic. I understand Ronald Jones is Ronald Jones, and he will get his carries, but I still think the heart and soul of the Trojan run game this year will be Davis.

* Darreus Rogers is looking every bit the veteran senior. He looks comfortable, in control and in good physical shape. It would be a huge bonus to have someone opposite JuJu who is capable of 50-60 catches, and Rogers definitely looks ready to make that kind of step up.

* Of the very good freshmen receiver group. I would say I’m most impressed with Tyler Vaughns. It’s not by much, the others are good too, but Vaughns has stood out with his ability to make catches in coverage.

* Tyler Petite is reminding me more and more of Rhett Ellison. I say that as a huge compliment.

* Credit needs to given to Nico Falah for stepping in to a relatively new position over spring and summer and providing a solid option at the center spot. It remains to be seen what will happen with Toa Lobendahn coming back from his injury, but at the very least Nico has shown that he can handle the demands of center, something that allowed the coaches the option of giving Khaliel Rodgers a look on defense.

* Speaking of, I’m glad to hear that Rodgers will continue on defense for now. I realize it’s a tough transition to make but count me as one who thinks Rodgers could end up playing a much-needed role in the rotation. His biggest asset is his aggressive style of play, that and the fact that he’s 325 pounds of strong man, and he’s voluntarily making this move because he wants to help the team.

* The depth on the d-line has been talked about as the biggest issue facing the team but the additions of Rodgers, Steve Tu’ikolovatu and Josh Fatu will go a long way to help. Right now I would say the inside linebacker spot is another potential issue, especially in the early part of the season against teams like Alabama and Stanford. Cameron Smith isn’t out there as he continues to rehab from his knee injury and his availability level is in question for those physical games. I like the depth at the position with a lot of guys who can contribute but I was hoping to see someone (Osa Masina?) step up to be that complement to Smith, and to play the lead role while he is out, but we just haven’t seen that yet.

* Jordan Iosefa has surprised me. I didn’t expect him to look this good coming off the edge at OLB.

* Helton talked about the need for Kenny Bigelow to be “Coach Bigelow” while rehabbing from his injury, and that’s exactly what Kenny (photo above) has been doing. He’s out there consistently and taking his role seriously to work with the interior linemen.

* Biggie Marshall is a different player than what we saw last year, mentally and physically. He looks really good in the times he’s been out there. And I continue to think the move of Ajene Harris is going to pay off big time, right now I would call Ajene the #3 corner ahead of the impressive freshman Jackie Jones.