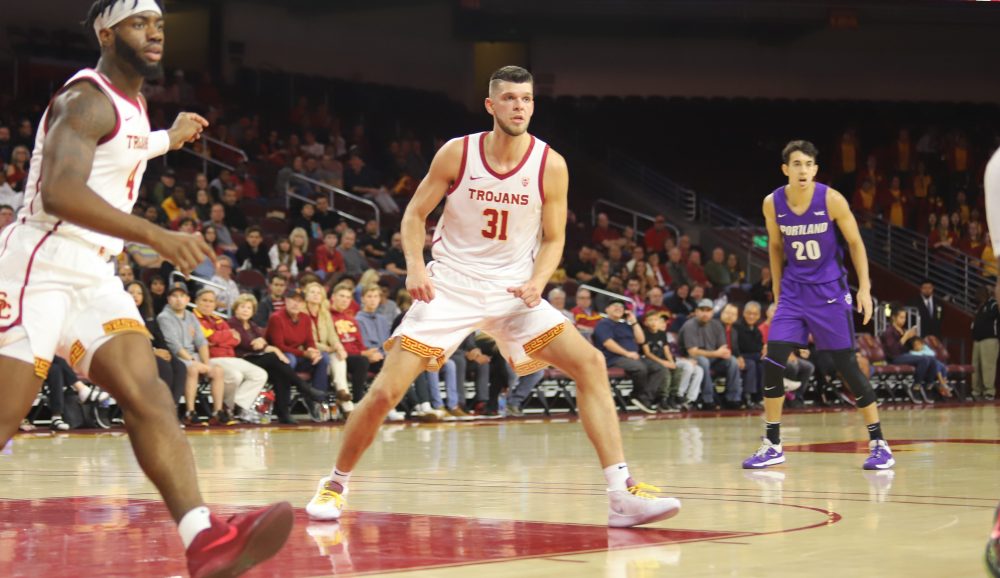 Nick Rakocevic had a second straight monster game and led the Trojans to a 76-66 win over Nevada in the team’s first road game of the season. The arena was packed and loud, giving the SC freshmen a taste of college basketball on the road. Nick played especially well in the first half, and finished with 24 points, 11 rebounds (6 on the offensive end, which led to easy put backs) and 2 steals. He displayed several very good low post moves, and didn’t react when he was hit across the face which resulted in a flagrant foul call against Nevada. After four games, he leads the team in scoring and surprisingly leads the team in steals

The game was one of contrasting styles. SC dominated in the paint, out scoring the Wolfpack 42-10. Nevada was able to stay reasonable close by shooting a lot of threes, and were led by senior guard Jazz Johnson who was 6-14 from three, and had 26 points. Even then, it felt like the Trojans had the game in hand and that the margin was larger.

Troy held Nevada to just under 33% from the field (20-61) and limited the Wolfpack to 2 fast break points. In the second half, the Trojans increased the pressure and held the Pack to 23% from the field and 3-16 from three. Through four games, the defense has been consistently aggressive, causing opponents problems inside and creating steals and turnovers.

The Starting Lineup Was Adjusted and the Only Eight Trojans Played

The staff knew that almost all of Nevada’s firepower came from their quick guards creating good three point shots. Andy countered by starting a three guard lineup, replacing 6’10” Isaiah Mobley with freshman point guard Ethan Anderson. Only three nonstarters played, Isaiah, Daniel Utomi, and Quinton Adlesh. Tall wings Max Agbonkpolo and Chuck O’Bannon didn’t play, presumably because they might have struggled defending quick guards, and I am speculating that freshman point guard Kyle Sturdivant didn’t play because Ethan and sophomore Elijah Weaver were very effective all night. Still, the shortened rotation surprised me. The starters played heavy minutes, 27 or more each, and Daniel played 22 and Isaiah 18 off the bench.

The Trojan Bench Scored Only 17 Points

It was good to see Daniel have a strong game. He scored 12 points on 4-9 from the field, though only 1-5 from three. He also had 4 rebounds. This was by far his best game of the regular season, and should help his confidence going forward. Isaiah had the 7 other bench points. He has flashes in each game where he does something special, such as his 3 point make against Nevada. But he needs to improve his inside toughness and more consistently block out better on the defensive boards.

Who Takes the Last Shot in a Close Game

I don’t think the Trojans have yet figured out who should get the ball when they need points very late in a game. After the first game, it seemed obvious that they had to get the ball down low to Big O. In the last two games, the answer seemed to be Nick. But I think at this stage the real answer is that they do not have a single go-to player. I could see Andy setting up a play to get the ball down low to Big O or Nick if there is an opportunity, and otherwise look for Jonah Mathews on the perimeter. All three are good free throw shooters. Or, the strategy might be to put the ball in Ethan’s hands and allow him to create an opportunity for one of the other three. But the fact appears to be that right now, SC does not have a go-to player at crunch time.

The Trojans Took Good Care of the Ball

After turning the ball over 37 times in the first two games, the Trojans have been much better. They only had 8 turnovers against the Wolfpack.

Ethan had another strong game. He had 8 points and 8 assists with no turnovers. His season assist to turnover ratio is an insane 6.8-1.3. He is playing over 21 minutes per game, which would not have been predicted when summer camp began. He has cemented his role as a major contributor.

Alford’s Success Against the Trojans Was Upended

While at UCLA, Nevada head coach Steve Alford was 11-4 against SC. Three of those losses were in the 2015-2016 season, when the NCAA bound Trojans pounded Alford’s Bruins by 14 and 19 in the regular season and by 24 in the Pac 12 Tournament.

The expectations after Big O’s unbelievable first game may have been set too high. Against the Wolfpack he had 6 points and 11 rebounds. His interior defense and rebounding are very good, and he blocks and alters several shots in each game. He has been prone to early foul trouble, which limits his overall impact on the game. I believe that the Trojans will need more scoring from him on a regular basis. It isn’t reasonable to expect Nick to score in the mid 20’s every night, and Big O is capable of making up a lot of the difference.

The Trojans passed their first road test and should feel good with a 4-0 start. All four wins have been by doubts digits, which they have not accomplished to start a season in decades. But as they approach the meat of the non conference schedule, there is a lot of improvement and development needed. The freshmen need to play consistently better. Big O has had one big offensive game, and Isaiah one big scoring half. Max had one several minute flurry in which he hit three 3’s. More is needed from these three at the offensive end. So far, this Trojan team has met the staff’s very high expectations on defense. They play very hard, and their interior size limits opponents’ opportunities around the rim.