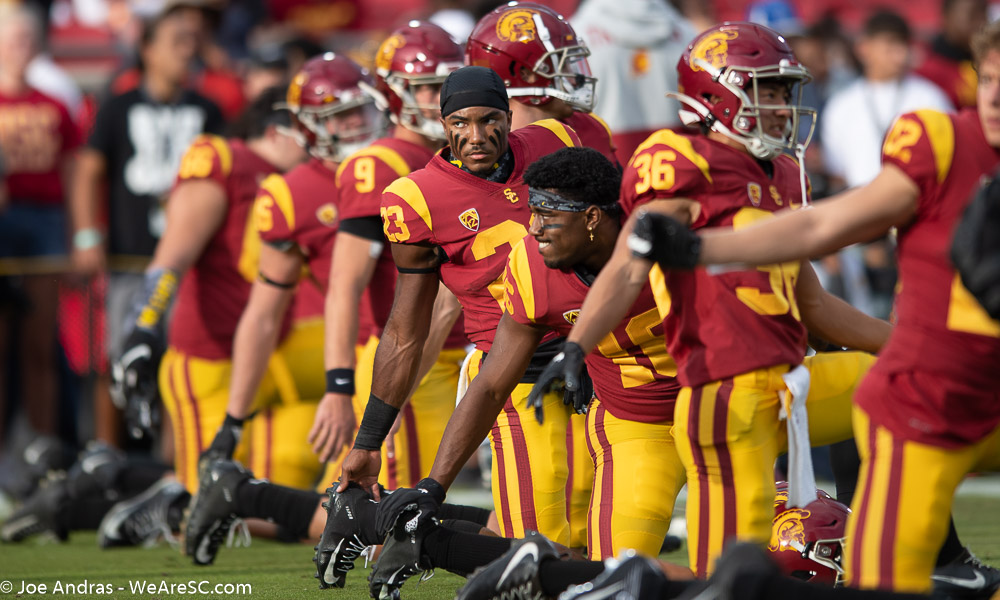 Assistant coaches have been hired, signing day has come and gone and the spring ball schedule is released. We’ve gotten a few answers that will shape this 2020 USC football season, but several questions remain as we head towards spring ball.

Back in December, we took a look at several questions facing the Trojans at that time. At this point, we’ve gotten answers for most of them. We’ll look back at those questions and ask a few more.

What happens with the assistant coaches?

The offensive staff will remain virtually intact, with the only change occurring as John David Baker moves from an offensive analyst working with the quarterbacks, to the full-time tight ends coach. Graham Harrell will return for his second season as USC’s offensive coordinator and quarterbacks coach after interviewing for several open positions over the offseason. Running backs coach Mike Jinks, offensive line coach Tim Drevno and wide receivers coach Keary Colbert are back as well. But there will be new faces literally everywhere else for this USC staff.

Special teams is now coordinated by Sean Snyder, who comes to USC after spending more than two decades at Kansas State, where his father, Bill Snyder, established himself as a college football legend.

Defensively, USC will have an entirely new staff. Defensive coordinator Todd Orlando has had very successful seasons at Utah State, Houston and Texas. He’ll likely take over the linebacker position as well. He runs an attacking defense that has typically utilized a three-down front and brings pressure in the form of blitzes from linebackers and safeties. To help install his defense, he brought in safeties coach Craig Naivar, whom he worked with at both Houston and Texas. Naivar will be joined in the secondary by new cornerbacks coach Donte Williams, who comes down from Oregon and represents a very significant addition when it comes to recruiting. Up front, former Virginia coach Vic So’oto will coach the defensive line, though USC has yet to announce him officially.

Obviously there is a long way to go before we know whether these changes will yield positive results, but clearly head coach Clay Helton is looking for the kind of boost on defense that he got on offense last season, with Harrell in charge. From 2018 to 2019, USC’s offense gained 71.4 more yards and scored 6.4 more points per game. The Trojans are hoping to see similar improvement on the defensive side, as USC finished 76th in total yards allowed per game and 72nd in points allowed per game.

How does USC perform in the Holiday Bowl?

What happens during the early signing period?

USC did not sign a strong recruiting class on paper, but there are some pieces to work with and it’s probably a safe bet that the Trojans signed a few eventual contributors on both sides of the line of scrimmage. USC might have an instant-impact wide receiver addition in Gary Bryant, but it would be surprising to see too many true freshmen see significant time in 2020. The six offensive linemen and three defensive linemen likely need a year or two to develop behind some established starters ahead of them.

USC had some good news here, as left tackle Austin Jackson was the only player to leave early for the NFL Draft. It leaves a sizable hole at left tackle, but USC brings back left guard Alijah Vera-Tucker, defensive tackle Jay Tufele and wide receiver Tyler Vaughns.

What happens at quarterback?

It will be very interesting to see how Helton and Harrell address this question during spring ball. If there is any debate here, it’s clearly out of respect to JT Daniels, who likely won’t return to the field until fall camp at the earliest. In any other scenario, what Kedon Slovis did last year as a true freshman would make him the clear and obvious starter. But with Daniels being named the starter last year and playing well through his first half of football before sustaining a season-ending knee injury, the question could loom until he returns, the competition plays out and a final answer is given.

Matt Fink remains on the roster and will give the Trojans a veteran presence in the room. We’ve also seen enough of Fink to know he’ll push Slovis every bit of the way this spring.

USC also recently added a grad transfer walk-on in Mo Hasan, who comes over from Vanderbilt. Hasan has some limited game experience, and he’ll provide some valuable practice reps as the Trojans have just two healthy scholarship quarterbacks for spring ball — with Daniels injured, and USC having lost Jack Sears to the transfer portal and missing out on signing a 2020 quarterback.

And a few questions moving forward:

What is the spring ball schedule?

This is a question that got an answer over the weekend, as the Trojans released their 15-practice schedule for this year’s spring ball. USC will begin on Tuesday, March 10 and go through Saturday, April 18.

Whether head coach Clay Helton personally made every change with the assistant coaches or not, it was clear there was a feeling that big changes needed to be made. Now, we’ll see what happens with practices. Helton has been very consistent in the shape his practices have taken during his years as USC’s head coach. The additions of Orlando and Snyder make this something to watch this spring. Orlando has said at every one of his coaching stops (including USC) that he believes in tough, physical practices. It will be interesting to see if that requires a change in what USC has done over the past few years, or if the tempo and tenacity Helton has established at USC fits with what Orlando is looking for in a practice.

Snyder’s contributions will be noted as well. Under former coordinator John Baxter, special teams took center stage for huge chunks of practice time and were often the majority of what media was allowed to watch during the season. Will that continue under Snyder, or will he make a change to what we’ve seen from USC’s special teams practice over the years?

For many USC fans, there is no bigger questions right now than the potential tweaks to Trojans practices, as USC begins preparation for a schedule that includes Alabama, Notre Dame, Utah, Oregon, Washington and others.

Will there be roster additions?

Helton said on signing day that USC held two scholarship spots open so they could go after a few additional players in the transfer portal. At this point, offensive line looks like the biggest need, as there isn’t a clear answer to replace Jackson at left tackle or Drew Richmond at right tackle — though there are players such as Jalen McKenzie or Liam Jimmons who could make the move outside.

Of course, with the transfer portal always open, there is a chance there could be more movement with the roster as spring ball kicks off, players adjust to the new defensive scheme and depth charts start to take shape.