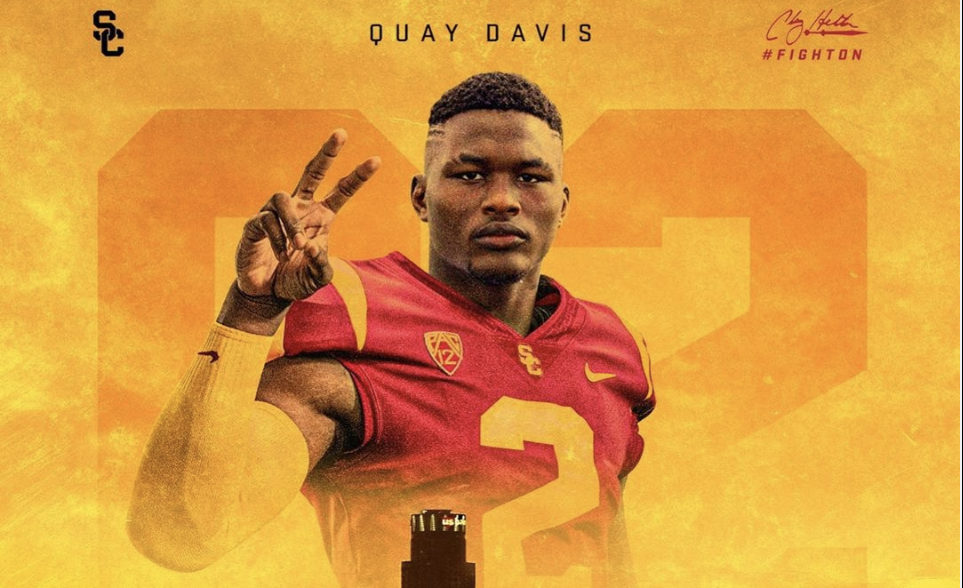 Over the past two offseasons, USC has added offensive and defensive coordinators with deep Texas ties and those roots are starting to pay off on the recruiting trail in a big way. On Friday, the Trojans landed their second big-time Texas prospect of the 2021 class.

A little more than a month after four-star running back Brandon Campbell (Katy, Texas/Katy) announced his commitment to USC, the Trojans landed a commitment from four-star wide receiver Quaydarius Davis (Dallas/Skyline) on Friday.

This is the third verbal commitment for Davis, as the 6-foot, 193-pound receiver has previously been committed to SMU and Texas. He’s the nation’s No. 105 overall prospect and a top-20 receiver in the country who also held offers from Alabama, Florida, Georgia, LSU, Oregon and others.

USC went after Texas hard in the 2020 class, as the Trojans brought in a number of Lone Star State official visitors over the summer, but missed on all of them. Eventually, USC landed offensive tackles Courtland Ford and Casey Collier late in the process. And while those two didn’t move the needle much in terms of recruiting rankings, both have the potential to develop into multiple-year starters for the Trojans. Beyond that, however, it showed that USC was dedicated to creating or continuing their relationships in Texas, which is now producing commitments from big-time prospects.

While Davis doesn’t do any one thing demonstrably better than other top receivers in this class–such as possess terrific height or run the most precise routes–he is a phenomenal all-around pass catcher, capable of lining up inside or outside and is a true threat after the catch. And continuing a theme that is becoming more and more clear with this class and the recruits the USC staff are targeting, Davis’ biggest strength might be his attitude on the field, as he plays the brand of violent, physical football that these coaches have preached since arriving at USC.

Davis is the first wide receiver commitment for the Trojans in the 2021 recruiting class, and he’ll be added to a stockpile of talent at the position. USC signed five talented receivers in the 2019 class–Drake London, Kyle Ford, Bru McCoy, John Jackson III and Munir McClain–then added two more this past recruiting cycle, in Joshua Jackson and Gary Bryant. But the Trojans will lose redshirt senior Tyler Vaughns following this season and Amon-Ra St. Brown could elect to leave early for the NFL Draft.

Wide receiver is a position where the Trojans should be expected to add at least a few prospects in every class, given how important the position is in the Air Raid, as well as the fact that the talent level at the position and numbers put up could combine to mean early exists for the draft and a quicker turnover at the position.

The Trojans are still in the mix for a number of other receivers in this class, starting with in-state prospect Troy Franklin (Menlo Park, Calif./Menlo-Atherton), the nation’s No. 3 receiver and No. 30 overall prospect. USC could also continue to recruit Clemson receiver commitment Beaux Collins (Bellflower, Calif./St. John Bosco). And out of state, USC is a major player for dynamic receiver Michael Jackson (Las Vegas/Desert Pines). The Trojans are also in the top list for Dont’e Thornton (Baltimore/Mt. Saint Joseph), the nation’s No. 45 prospect.

Davis is commitment No. 10 for USC in the 2021 class, as the Trojans are now stretching their lead over the rest of the conference for best class in the Pac-12. With Davis and Campbell out of Texas, the other eight members of USC’s class are all from Southern California.

In joining five-star quarterback Jake Garcia (La Habra, Calif./La Habra), Davis is the seventh four-star prospect in a class that will sign directly after the Trojans inked just two four-star recruits in the 2020 class.

USC has recently climbed into the top five recruiting classes, but recent strong runs by Iowa, Minnesota and Tennessee pushed the Trojans down to No. 9. The commitment from Davis moves the Trojans back up to the No. 7 recruiting class in the nation for the 2021 cycle.