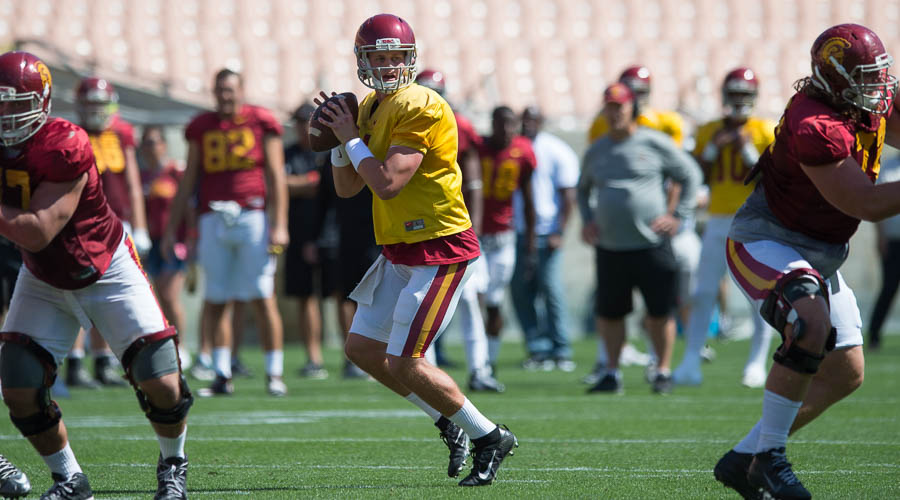 With a number of key contributors on the defensive side of the ball sidelined due to injury, it was the offense that stole the show in the USC spring game on Saturday, with the four members of the highly publicized quarterback competition all impressing USC head coach Clay Helton with their performances – particularly front-runners Max Browne and Sam Darnold.

“I absolutely loved how the quarterbacks played today,” Helton said. “I thought they competed extremely well [and] spread the ball around a lot, especially the first two quarterbacks – five touchdown passes. I thought they were very efficient.”

With depth an issue, in general, the team was put through a number of full-contact situational scenarios, rather than a scrimmage. Browne, who had one of his top performances of the spring, kicked things off early by throwing a 64-yard touchdown bomb to a wide-open Darreus Rogers, before connecting with JuJu Smith-Schuster for two more scores, finishing 7-of-11 for 114 yards and 3 touchdowns.

Darnold, meanwhile, finished 6-of-7 passing for 63 yards and two touchdowns, including a 25-yard scoring heave to Daniel Imatorbhebhe.

Following practice, Helton said that his first order of business now that spring ball is in the books will be to watch film from Saturday’s session – with a focus on the quarterback position.

“We’re fortunate we have several good quarterbacks,” Helton said. “It’s a great competition. I look forward to watching this tape and being able to visit with them on Monday, and making a decision on whether to name a quarterback on Monday, or to move the competition to the fall. I’ll know that shortly.”

While the quarterbacks, receivers and running backs certainly made their share of highlight-reel plays on Saturday, it was walk-on long-snapper Jake Olson who drew the loudest cheers from the announced crowd of 23,000. Olson, who lost his eyesight to cancer at the age of 12, delivered two successful snaps during a late field goal period, before being swarmed by his teammates.

“Can you imagine, to walk out there, in front of these fans, and to say, you know what, ‘I’m going to get the opportunity to snap in front of my Trojan Family,’ and to hit two dead on the money. How special a kid is he?” Helton said. “You can tell the love that this team has for him and his fellow brothers on the team have for him.”

– Defensive lineman Noah Jefferson went to the sideline and had his arm placed in a sling after suffering a hyperextended elbow, although Helton does not believe the injury to be serious.

– In addition to Browne and Darnold, Jalen Greene also enjoyed a solid outing, completing 4 of 7 passes for 52 yards.

– Ronald Jones II was the leading rusher on the day, compiling 64 yards and one touchdown on 14 carries. Justin Davis had eight carries for 62 yards and three touchdowns.

– Olajuwon Tucker led the defense with 6 tackles. Michael Hutchings, Marvell Tell and John Houston Jr. all made 5 tackles each.

– Walk-on cornerback Kevin Carrasco compiled the only interception of the day. It came on a pass thrown by early-entrant freshman Matt Fink.