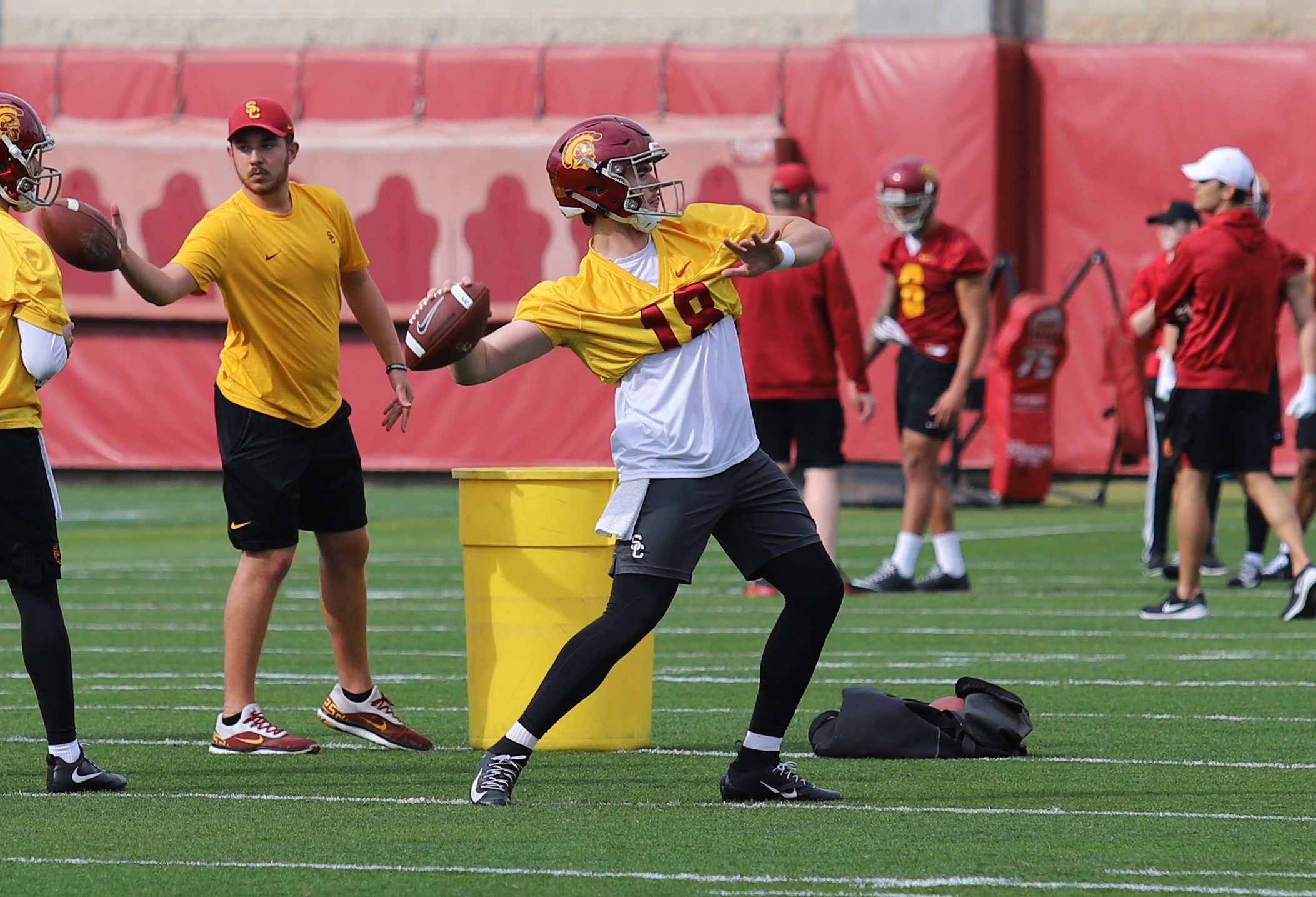 “Whoever’s playing best will step out there first.”

Head Coach Clay Helton spoke candidly about the state of his team Tuesday, stressing that competition will drive who sits atop the depth chart during spring training.

New offensive coordinator Graham Harrell’s presence could be felt early on Tuesday, as he worked closely with the quarterbacks for most of practice. With possible accordance to his new air-raid scheme, coach Harrell had his quarterbacks aggressive early, starting them off by throwing deep fly routes to receivers on both sides of the field.

All quarterbacks had a chance at leading the team down at the goaline against the defense, throwing fades to one side of the endzone. Referees were posted there per coach Helton’s new plan to eliminate costly penalties that weighed down the Trojans disappointing 2018 campaign. Daniels made some tight over-the-shoulder completions while Slovis impressed with a heavily-contested slant completion. Fink was throwing well but was forced to improvise with his legs at times. During this drill, Harrell was standing atop Deadeaux Field watching his new offensive unit produce.

Graham Harrell, who last coached for North Texas, did not shy away from working his quarterbacks hard on the first day of practice, as the group ran sprints longer than any other position group following practice. After just one full practice, Harrell appears to have complete control of the group, as Helton and the other quarterbacks raved about the new coordinator.

Asked what his first impression of coach Harrell was, Sears said it was “his passion for the game.”

How the quarterbacks adjust to Harrell’s new uptempto scheme might just indicate who will be under center come week one.

Although Daniels is the presumed starter for the 2019 season, it is not necessarily guaranteed. In post practice interviews, J.T. stated that “leadership” was the one thing he hopes to improve moving forward. Leadership is something that will ultimately determine who steps
fourth as number one on the depth chart. Asked about the quarterback competition, Sears said, “My focus stays the same, to be the starting quarterback at USC.”

One thing is for certain, it’s going to be a crucial spring for the next Trojans starting quarterback.

Carson Marsh is a sophomore at USC, majoring in Communications. He is interning for WeAreSC, providing team and recruiting coverage.