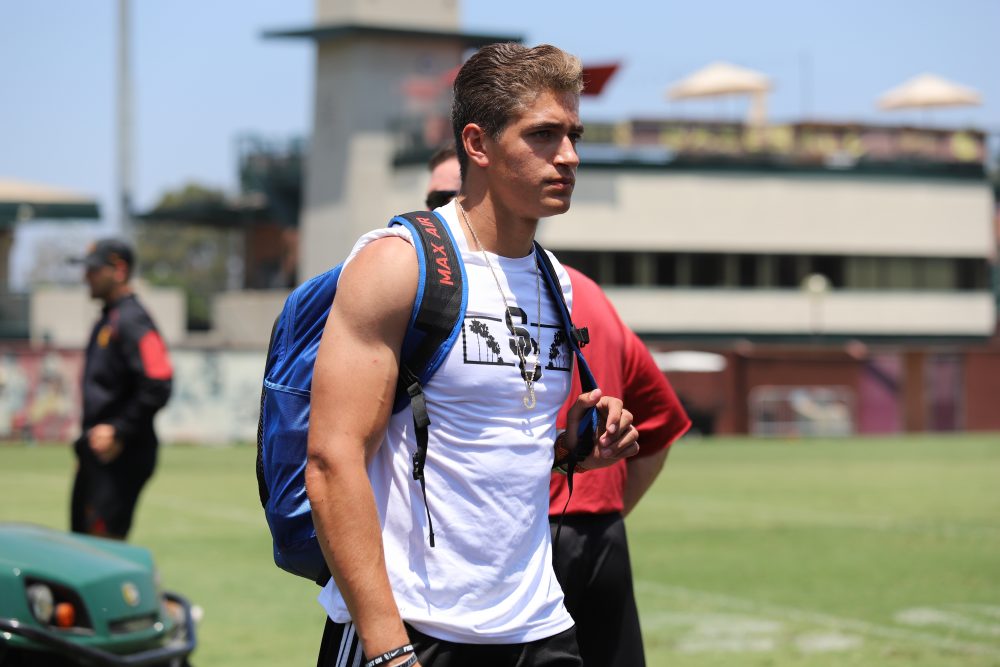 One day after the USC Trojans lost the prize of their 2020 recruiting class, Clay Helton’s program might have added the signature piece of the 2021 class.

Senior quarterback Bryce Young flipped his commitment from USC to Alabama on Sunday, dealing the 2020 class a major blow. But that was softened a bit on Monday evening, as five-star 2021 signal-caller Jake Garcia (Harbor City, Calif./Narbonne) announced his pledge.

Garcia, 6-foot-2, 190 pounds, is the No. 14 overall prospect in the 247 composite (the No. 22 overall player in the ESPN Jr 300) and holds offers from just about all of college football’s powers, including Alabama, Auburn, Florida, Georgia, LSU, Ohio State, Oregon, Texas, and others.

This is a big commitment for the Trojans, as they’ll take any kind of positive recruiting momentum following Young’s flip to the Crimson Tide. With him in the fold in the 2020 class, it might have been difficult to pull in one of the top local 2021 quarterbacks. With Young no longer committed, the timing was right for Garcia to pull the trigger on his commitment. It will still be interesting to see what direction the USC coaches go with 2020 quarterback recruiting, as another quarterback competition before the 2020 season has the potential to result in another transfer, hypothetically leaving USC with just two scholarship quarterbacks for the season.

For now, however, the USC coaches and recruiting staff will undoubtedly celebrate this win on the trail.

Garcia is a tremendous pocket passer and already possesses a terrific arm. He certainly seems to be a perfect fit for this Graham Harrell offense. While he isn’t a running quarterback by any means, he’s mobile enough at this point and possesses good athleticism. The recruiting hype obviously dwarfs that of USC starting quarterback Kedon Slovis, but there are similarities there with the arm talent and ability to effortlessly throw the football.

While USC has struggled to get the wheels moving on its 2020 recruiting class, Garcia adds to a really good 2021 class, which now features four ESPN Jr 300 prospects — linebacker Ma’a Gaoteote, defensive tackle Jay Toia, and wide receiver Velltray Jefferson, as well as Garcia.

In five games this year, Garcia has completed nearly 72% of his passes for 1,299 yards, with 14 touchdowns against six interceptions. Garcia plays on a loaded Narbonne team, with a 2020 USC commitment in wide receiver Joshua Jackson, cornerback target Darion Green-Warren, and 2022 linebacker target Taariq Al-uqdah.