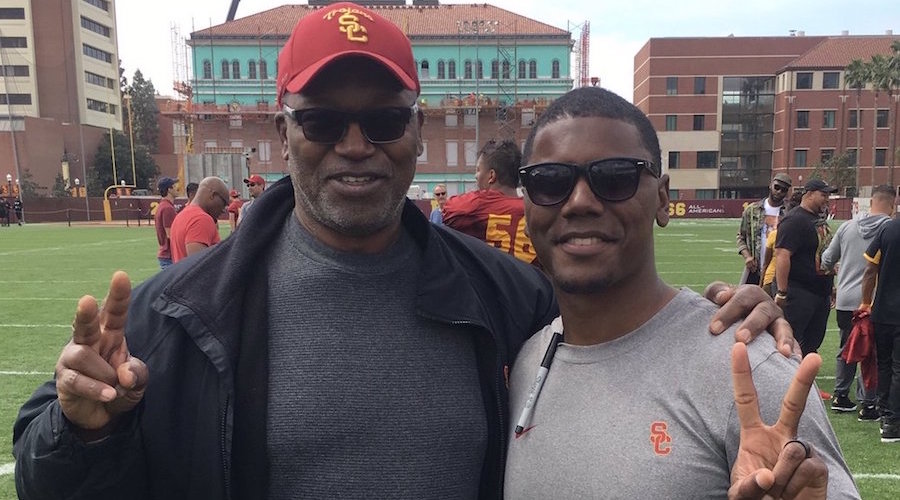 You’re now the tailback coach at Tailback U, how has that settled in so far?

It’s setting in. This environment is like the mecca of football so I’m excited about that and happy to be here. First of all I like the guys, it’s a great coaching staff and great support all the way around. The players that they have fit the style of coach that I am, so I’m just going to come in and be a blue-collar guy and we’re going to work hard for what we get. I also know with the type of talent we have that we can take things to the next level and I’m excited about that.

A lot of people think of USC as Hollywood but the blue-collar work ethic is what built the program.

That’s true. I saw it when I came on my interview, these are some guys that want to get down to it, roll up their sleeves and get to work. The players made it clear to me that they wanted to work hard, they wanted to be great.

What did you stress to Clay Helton when you interviewed for the job?

I stressed the little things, whether it be alignments, reads, footwork, hand placements, all the things you hear me hollering at these guys out here. I’m a detail freak. One thing that I think gets overlooked for a running back coach is you can’t just hand the ball to a guy and say ‘do it’. You’ve got to give him reads, you’ve got to give him angles to take, things like that. You try to be a great student of the game so that you can turn around and be a great teacher as well.

What are you looking for in a running back?

I like tough guys. Tough guys who want to be great. And if they have great attitude and great effort we’re going to get it done. That’s kind of where I’ve made my mark is finding guys with that core skill set but more importantly a great attitude.

Ronald Jones: RoJo is this rough mold of clay that I think we’re doing some great things with in terms of his eye discipline, his attention to detail. He wants to be a great player and he’s bought off on what we’re talking about.

Aca’Cedric Ware: Ced is kind of a do-it-all player. He’s got great leadership ability. I’ve really challenged him to stay on his feet and to be the kind of explosive player he was in high school.

Vavae Malepeai: Vae is a very complete player. He can pass protect, he can run hard, he can run with velocity, he’s faster than you think, deceptively fast. He’s got that twinkle in his eye that you like, he sees an opportunity and he wants to take advantage of it.

Incoming TB Stephen Carr: I got to hang out with Stephen on Saturday after the scrimmage. He’s a high-skilled kid, he can do a lot of things with the ball, can do a lot in space, big strong dude

Reuben Peters: I like working with a guy like Reuben Peters who is trying to establish his identity. He’s a real student of the game and he wants to help the team so we’re giving him some things to help him with his reads. That’s one of the things I’m doing is trying to simplify the reads to make it an easier game for these guys to play fast. You’ve got to make guys believers in what you’re doing, you’ve got to build trust, and that comes from being consistent and then seeing results.

Yeah, we’ve got a Fumble Pro on back order and this is one of the things I’m big on to help with ball security. We had to make these, it started a few years ago when we had to get a nozzle for the water bottle. You get what you stress so if we stress ball security, as well as other things, we’ll get the results we want.