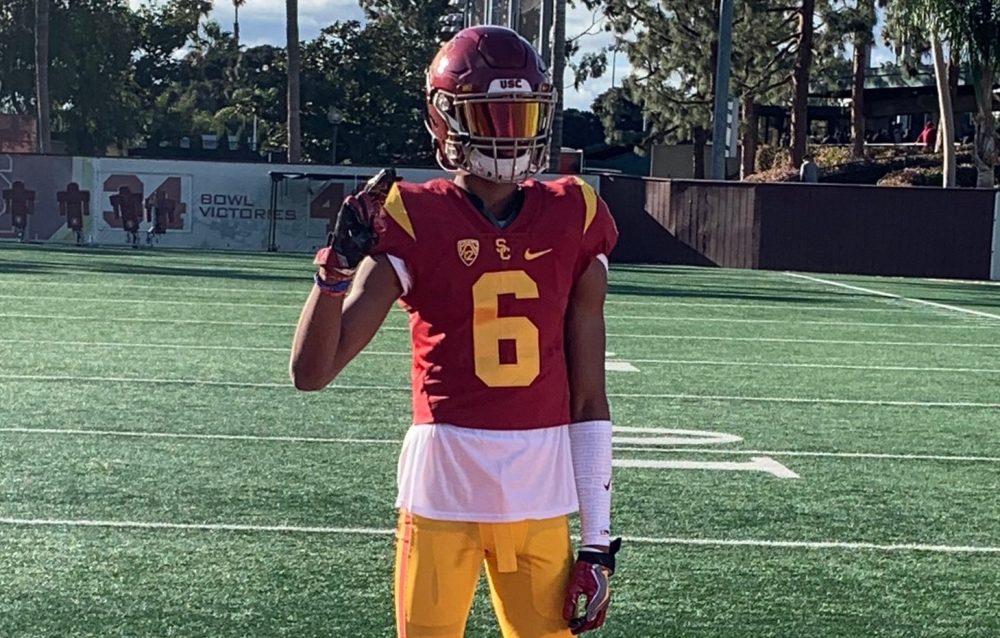 Mater Dei and St. John Bosco are two programs where USC has to make an impact with recruiting, as the Monarchs and Braves have produced some of the top talent in Southern California in recent years (and Mater Dei going back well before that). But Mission Hills (Calif.) Alemany has quickly become a spot where USC has focused its attention as well, and seen plenty of success. The Trojans already have a start there in the 2022 class, and hope to continue that run with cornerback Ephesians Prysock.

At Alemany, USC holds commitments from offensive tackle Saia Mapakaitolo and cornerback Jaylin Smith in the 2021 class, as well as linebacker Niuafe Tuihalamaka in the 2022 class. Quarterback Miller Moss was at Alemany when he committed to USC, but has since announced his intention to transfer to Mater Dei.

Prysock will be one of the top targets in Southern California for several programs in the 2022 class, as the 6-foot-3, 170-pound is regarded as the No. 198 overall prospect and No. 15 safety in the country.

But it might be just a bit difficult to convince him that he’s a full-time safety, as Prysock will do what he can to stay at cornerback for as long as possible. And with his combination of size, speed and range, it’s tough to bet against him sticking there for a while.

“A lot of schools are recruiting me at safety, but I feel like I fit best at corner,” Prysock said. “At safety, I feel like I get too bored back there. For the most part, I try to tell all the coaches that I play corner.”

Though, Prysock added that he’s comfortable playing corner, nickel and safety and that he feels he could fit in anywhere in the defensive backfield depending on the best fit for the coaches wherever he winds up.

Prysock began his football career as a wide receiver, but flipped over to cornerback beginning in ninth grade. He began playing football when he was seven, taking after his older brothers–one of which, Tysean, played football at Sacramento State as a member of the 2017 recruiting class. As a sophomore at Alemany, he played some receiver as well as defensive back.

He caught 15 passes for 163 yards and a touchdown, and added 43 tackles on defense.

Programs across the country are looking for that combination at cornerback. Florida was the first offer for Prysock and Clausen said Gators’ safeties coach Ron English compared Prysock to former Florida cornerback–now USC cornerback–Chris Steele.

“He has that kind of length,” Clausen said. “He has a chance to be really, really good.”

Prysock’s recruiting process took off a little differently than many other prospects’, as he dove right in with the power players on the recruiting scene, rather than picking up local offers or ones from smaller schools first. At this point, LSU, Notre Dame, Ohio State, Oklahoma and USC have joined Florida in extending offers.

He’s taken it in stride, saying he didn’t really even know how to react to that initial offer from Florida, and that he has no real plans at this point in terms of dealing with a process that has been delayed significantly by the ever-expanding dead period and postponement of Pac-12 and Big Ten football until January at the earliest. He had planned to take unofficial trips to a number of schools this fall, with LSU, Ohio State, Oregon and USC all on the list.

USC continues to recruit him hard. He spoke with safeties coach Craig Naivar this week as Trojan coaches touch base with targets to update them as much as possible on what’s happening (or not happening) with USC and Pac-12 football this fall.

Prysock said he talks to Jaylin Smith about USC and that Smith comments on the recruiting ability of the USC coaches to make recruits feel like a priority and that they’re wanted as part of the class. He’s also taken note of how many teammates are being targeted by the USC staff, which is a positive for him.

During this long break without organized football, Prysock said he’s been working out in the gym or in the garage, or as part of small groups, trying to get and stay ready for a high school season that has been pushed back to a December start date for practices.

As for the strengths he brings to the field, Prysock said, “I feel like I’m a pretty good guy in press man coverage. I could work a little bit more on off-man, but I have the technique, speed and height. Not many people can throw fade balls on me and things like that.”

And when it comes to a leader or “dream school” heading into the recruiting process, Oregon might have been labeled that at one point long ago, but it’s a clean slate for him right now.

“Back as a kid I always wanted to play at Oregon because of how many uniforms they had,” Prysock said, before adding that his priorities have shifted a bit. “But now that I look at it–and I’m not saying Oregon isn’t good–but I want to play for one of the top teams and shine.”

With offers from the likes of LSU and Ohio State–two programs that have done well coming into Southern California and grabbing commitments from top prospects, Prysock could be another one that leaves the state or the conference. But that’s not a guarantee, as he said, “I could probably find that in Pac-12. It has some pretty good schools that can match up.”