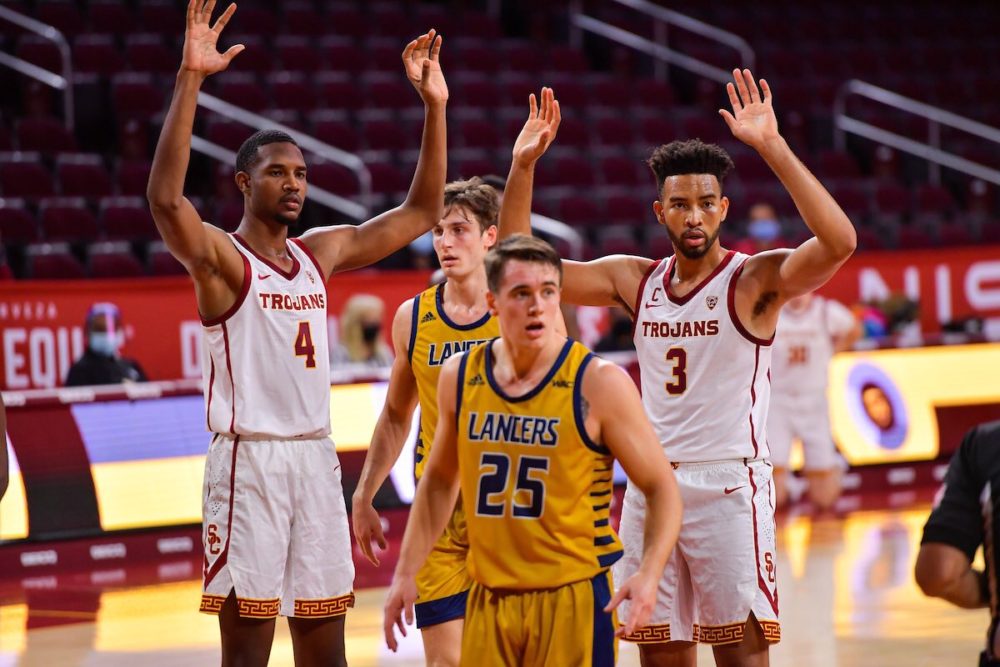 The Trojans are in Connecticut for the Legends Classic and scheduled to play BYU on Tuesday but the scheduled second game is now up in the air. Vanderbilt withdrew from the event on Sunday due to Covid issues and there are rumors that UConn may also withdraw. As of now UConn does not have a Tuesday opponent and whether the Trojans will play on Thursday and against what team is up in the air. The teams at the Classic are in a mini bubble at the Mohegan Sun. The early season scheduling issues will likely present obstacles all season. What will March Madness look like when teams are sidelined due to Covid?

USC is 2-0 and will play their first big name opponent in BYU. The Trojans’ size and talent were on display in the wins over Cal Baptist and Montana. All five starters and Isaiah White are averaging 10 points or more. The Trojans have out rebounded their opponents 91-57, have a large 27-2 margin in points on fast breaks, and lead their opponents with 10 dunks to 3.

The Cougars received a few votes in the latest AP poll after their 3-0 start. Like the Trojans, the Cougars started the season with lesser known opponents. They have beaten Division II Westminster College 108-59, New Orleans 86-61 and Utah Valley 82-60. Last season they finished 24-8 and second in the West Coast Conference behind Gonzaga and were ranked as high as 14 at one point in the season. BYU shot 59% from the field last season, third best in the country, and led Division I at 42.3% from three.

The Cougars are led by second year coach Mark Pope. Pope was a very good forward at Washington State before transferring to Kentucky and played in the NBA for the Pacers and Knicks. BYU is picked to finish second in the conference again this year behind currently top ranked Gonzaga and are expected to be in the NCAA Tournament.

The great size advantage the Trojans enjoyed last week will be somewhat neutralized against the Cougars. 7’3” grad transfer Matt Haarms is an experienced big man who was productive in his years as Purdue. Once he entered the transfer portal he attracted attention from name programs including Kentucky and Gonzaga. He is a very good post defender and can sink an occasional three. He relies on his size and is not particularly athletic. Haarms averaged 8.6 points and 6.8 rebounds in his career at Purdue but his real value was to limit opponents’ interior scoring. So far this season he is averaging 10 points and making an astounding 80% of his shots against smaller opponents.

The Cougars have several other very good players and have started the season averaging over 30 three point shots per game. The team leader is 6’2” senior guard Alex Barcello who is on the ten player preseason All WCC First Team. Last season he averaged over 9 points and in the early going this season he has stepped up his scoring and is averaging 21 per game and is second on the team with over 6 rebounds per game.  Barcello has made 66% of his shots and 11-15 (73%) from three.

6’9” junior forward Kolby Lee averages 7 points and over four rebounds and will team with Haarums to help match the Trojans’ front court size. Lee leads the Cougars with 4 assists per game. The Cougars will also count on 6’6” juco transfer Gideon George. His minutes are expected to climb as he gains Division I experience

Tuesday’s game against USC is the first major test for BYU and it will be interesting to see how the teams compare. Carrying forward from last season in their first three games the Cougars are sinking 54% of their shots and 43% from three. The Trojans must play good defense and contest every shot. One interesting note is that BYU is only making 55% of their free throws.

If The Trojans Play UConn It Will Be Another Important Game

With Vanderbilt withdrawing from the four team event Thursday’s games are up in the air. The event sponsors are looking to add another team to provide two games for each team but Vanderbilt’s late decision makes this difficult.

The Huskies are 2-0 against much lower ranked teams. They beat Hartford 69-57 and blew out Central Connecticut 102-57. They recently had a two week shutdown due to the Covid virus and have had less time to practice. Dan Hurley is in his third year as the head coach. He is much milder than his brother Bobby at ASU and is called “ the good Hurley”. He came to UConn after a six year run at Rhode Island, leading the Rams into the NCAA Tournament in his last two seasons. Last season the Huskies were 19-11 and finished in a fifth place tie in the American Athletic Conference with a 10-8 conference mark. UConn returns to the Big East this year and is picked to finish fifth in the preseason poll but Big East followers believe they could finish higher

In the first two games the Huskies made 50% of their shots and 33% from three. They have good size and returning talent plus a good recruiting class. The backcourt is the strength of this year’s team. The top returning player is 6’5” sophomore guard James Bouknight who is averaging 19 points and 6 rebounds. Transfer point guard RJ Cole averaged 23 points and 6 assists last year at Howard and is averaging 13 1/2 points and 3 1/2 assists in the first two games this season.

In the front court the Huskies will rely on freshmen 6’6” freshman forward and top 50 recruit Andre Jackson and the 14th ranked center in the 2020 recruiting class in Adama Sanogo. Both have gotten off to slow starts. Returning 6’9” forward Isaiah Whaley is averaging 11 points and 8 1/2 rebounds  and 6’3” guard Jalen Gaffney is averaging over 10 points.

A Look Back At Last Week’s Games

The Trojan coaches liked much of what they saw in the first two games. Coming from behind late in the game to beat a Cal Baptist team which plays a very different style will should benefit USC later in the season and gave the Trojans a taste of making in game adjustments on defense. The first 15 minutes against Montana were a glimpse of what this team can be. The team needs to work on perimeter defense and free throws (which seem to be an issue every year). And most importantly the Trojans need to figure out how to get Evan Mobley shot opportunities when he is double teamed.

The players seem to have begun to settle into their roles. The transfers have all looked good, at least in spots. Drew Peterson has brought a good all around game, can play three positions has and moved into the starting lineup. Isaiah White has shown the energy and nose for the ball the coaches have talked about. Tajh Eaddy demonstrated in the opener that he can score and Chevez Goodwin is a capable third big man off the bench. USC may not play a team which can match their overall team size and athleticism. Like many teams a week into season the Trojans are working to find consistently in their play. It is unusual for a team to have ten players who can all contribute but it appears the Trojan depth is real.

Player Of The Week

Although it has been interesting to see all of the new players, especially Evan Mobley, his brother Isaiah’s improvement over last season stood out. He is far more active on defense and on the boards and is showing that he has a much improved offensive game. He gets my vote for Trojan Player of the Week.