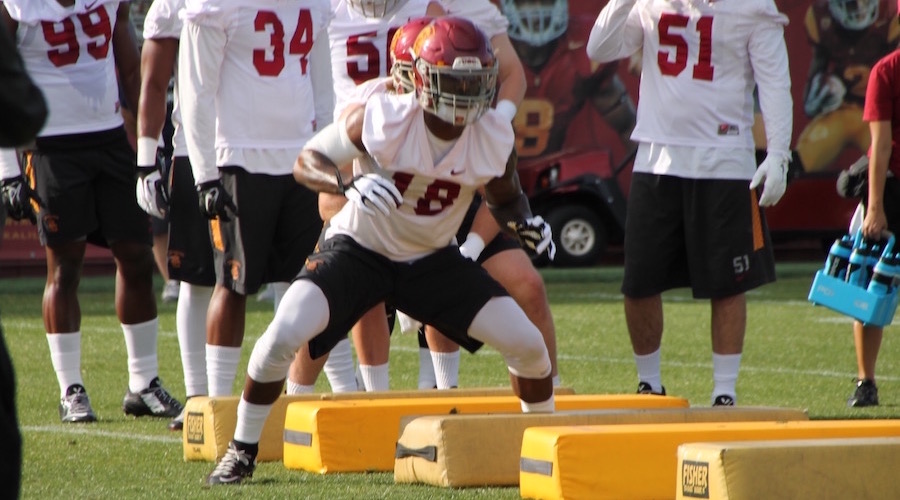 Buried on the depth chart at outside linebacker for the bulk of the Steve Sarkisian era, Quinton Powell was a forgotten man of sorts for the last two seasons at USC, with his most significant contributions coming only in special teams duty.

But with the return of defensive coordinator Clancy Pendergast, whom Powell played for as a freshman, the veteran senior has found a new lease on life as he’s thrived this spring while lining up in the same 5-2 system, and at the same ‘will’ inside linebacker position that he did in that initial season on campus – when he showed plenty of promise while serving as Anthony Sarao’s backup.

“When Clancy came in, he said, ‘I’m giving everyone a clean slate,’” said USC head coach Clay Helton. “I remember what Quinton was, you know, how much skill he had getting to the ball – kind of slithery as far as getting off blocks. And he’s put him in a position to have a chance to compete and show senior leadership, and I think Quinton is the happiest guy that Clancy is here.”

Lining up with the No. 1 defense throughout a majority of the spring so far, and looking completely at home, Powell couldn’t agree more.

That fact is clearly evident in the smile that is often times emblazoned on Powell’s face as he jogs onto Brian Kennedy-Howard Jones Field before every workout, not to mention the vocal enthusiasm that he brings to each 11-on-11 period.

It’s apparent that he’s enjoying each and every moment of it all, and he has Pendergast – who prompted his move back to the inside – to thank for it.

“As a freshman I was playing this same position, so he’d seen flashes of me in practice, and he knew that I could do something,” said Powell, a Daytona Beach (Fla.) Mainland product. “He wanted to see what improvements I’d made.”

Powell’s performance through the first four weeks of spring ball would seem to indicate that he’s improved quite a bit since that first season. A fast and athletic linebacker who loves to mix it up, he’s made more than his share of highlight-reel plays – including this past Saturday when he knifed into the offensive backfield and dropped Justin Davis for a loss with a crushing hit.

“You can really see his ability to flash in space,” Pendergast said. “He’s very explosive and really can run sideline-to-sideline. He diagnoses things very quickly.”

It’s Powell’s skill-set, combined with his aggressive style of play that has made him a near-perfect fit in Pendergast’s attacking defensive system.

“I love to blitz, that’s my thing,” Powell said. “I’m able to get off the ball fast, I have a good sense of urgency, and basically these blitzes feed into that, so it’s awesome.”

If there is a concern when it comes to Powell, however, it’s his size. Standing 6-foot-2, his most recent weigh-in had him at just 201 pounds. Not surprisingly, Pendergast and Co.  have told him that they want him to put on at least 15 pounds this upcoming offseason.

But with Powell possessing all of the other abilities needed to succeed at inside linebacker, Pendergast believes that he has what it takes to make an impact for the Trojans regardless – particularly given the large number of spread and up-tempo offensive systems that USC’s defense will face in the fall.

“He still gets on and off blocks well,” Pendergast said. “We play a lot of teams that play three, four wide receivers, so it will allow him to play in space a little bit more than some of the schemes in other conferences.”

But for Powell, this is only the beginning. Fully aware of what’s at stake after having spent the last two years in the background, he’s determined to continue to improve and to show just what he’s capable of each day in practice so that he can end his Trojans career on the right note.

“This is definitely a golden opportunity for me,” Powell said. “Basically the food is on the table, and I have to go take it, and I’m trying to do that every day.”