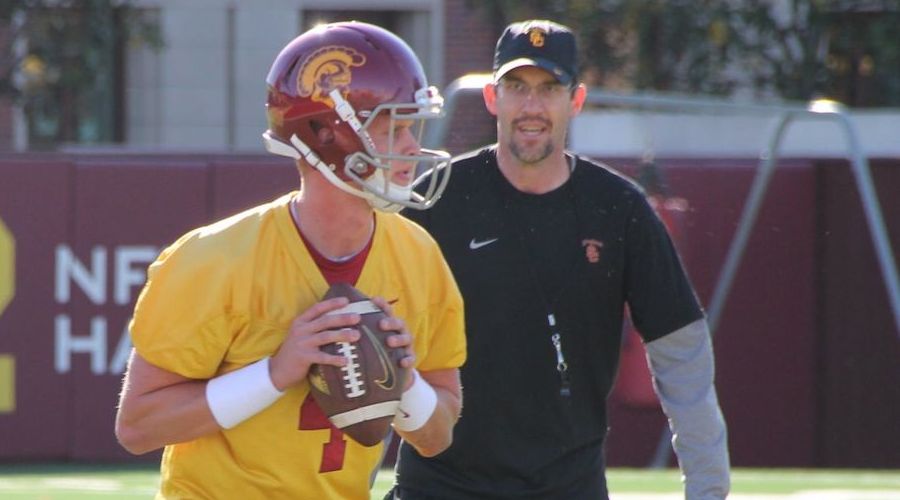 Q: You’ve been coaching Max Browne for a while now, but did you learn anything new about him this spring?

CH: “I’ll tell you what, I’ve always thought he’s a quarterback with great poise and game management. He never seems to get flustered. He’s just got an even temperament about him, and he’s one of those guys, I think, that do a great job of going to the next play. You know, he doesn’t let one failure on a play affect him the next three or four, and that’s what you want to see from a great quarterback.”

Q: Are you thinking that you will make an announcement on the quarterbacks this week?

CH: “I’m going to let it go through the spring game and then make a decision. If I had to call it right now, I’ll just be honest, I don’t think there’s a huge gap between the quarterbacks right now. Max definitely shows the game management and the poise that we want. He made some great decisions today. If I had to choose right now it would probably go on through [fall] camp. I promise you I’m going to have a decision before that first game. We’re not playing two quarterbacks. But I want to take it through the spring game and that atmosphere, see how the guys react to that presence of being on T.V., and having fans around. That’ll be, really, our first time really to have that for those kids – see how they react, and then make a good decision from there. But my ultimate goal is to be ready for that first game. Just realistically, right now I’m not quite ready to make that decision.”

Q: If you take it through the spring game, does that mean you might make a decision in May, or would it go to training camp?

CH: “It’ll be shortly after the spring game. I’ll be able to watch the tape. I’ll have a gut feeling from there. I’m not going to lead anybody on or hide any secrets or anything like that. If I feel like there is a huge gap, then I’ll make a decision. I’ll give Sam credit, and the other quarterbacks credit, they’ve really progressed through this camp, and have played well, and they deserve the right to compete, just like every other position.”

Q: In what areas have Browne and Darnold improved the most this spring?

TH: “I think Max has gotten a lot better about getting the ball out faster and responding quicker to things that he’s seeing out there. When we first started the spring, he was very knowledgeable, he knows where to go with the ball, [but] he was a little more cautious and protective, and I think he’s starting to see things and respond faster. We have to continue to grow on that through fall camp. I think Sam, just being a young guy, and it’s really his first spring in getting a lot of reps, was just mastering the offense more than anything. And every day he’s come out, he’s starting to get a better and better grip of that. Both of those guys are very talented. Either one of those guys can be our quarterback and play. So, we just have to build upon what they do well, and keep on growing from there.”

Q: Coach Helton has said that Darnold is completing a lot of passes, but that he’d like to see him do it more without the coaches in his ear. Will he be able to do that by the fall?

TH: “Yeah, he’ll be ready. Coach Clay, I think, does a great job of mixing in the time where the coach is talking to him while the play is going on, and there’s times where we’re off the field, and it’s all on him. And so, there’s a good mixture of that, and he’ll continue to grow in that area. But I think Coach Clay has done a good job of allowing both to happen.”

Q: How has Darnold reacted when the coaches aren’t in his ear so much?

TH: “Good, you know, the good thing about good quarterbacks is sometimes they might not go to the right places, but the ball is still complete, or they still throw touchdowns, and that seems to happen with Sam. You know, he might not always be right, but he makes it right. We just have to get him on the same page doing the right things all of the time.”

Q: What do you hope to accomplish on Saturday?

MB: “Just build off what I did last year. I feel like that was a real turning point for me last year. And just going out there and executing, just bringing the same mindset that I have all spring long. Executing the plays and making the most of my opportunities.”

Q: Do you feel like you have a chance to lock up the starting job going into fall camp?

Q: With spring practice almost over, do you think you’ve shown everything that you wanted to?

MB: “Yeah, I feel like I left some throws out there on some of the deep balls that I wish I could have back, but that’s just quarterbacking, and that’s just the nature of the beast. But I came out here, and I was executing, I was a leader, I drove this offense, and I was happy with the almost five weeks I put together.”

Q: Having come in so highly touted out of high school, was it hard to wait your turn for this chance?

MB: “Yeah, it was extremely hard. Someone asked me a few weeks ago, ‘How does it feel with Jared Goff, Christian Hackenberg [finding so much success early]?’ – Guys that I was buddies with. And it’s weird, they’re ending while I’m starting, which was different. But I think you learn to appreciate it. In life everyone has a different situation that’s thrown at them, but it was definitely tough. But I feel like it allowed me to grow and improve, and I’m better for it.”

Q: Was it hard to keep a level head and to keep expectations in check?

MB: “Not at all. As far as keeping a level head, no. That’s the way I was raised – just being one of the guys. I think you come in here, and you put your head down and work. And building relationships with people is all you can do. With expectations, with all the hype and all that, you expect to play right away, and when you don’t it’s a little tough, but like I said, that’s just the nature of the beast. And you learn from it and try to grow, and make the most of the situation that presents itself.”

Q: In what area of your game do you think you’ve improved the most over spring ball so far?

Q: How do you think your mobility plays into this offense?

SD: “It definitely poses a threat, but you’ve also got to be able to throw the ball and do all of the normal quarterback things. But it’s definitely an extra threat.”

Q: What do you hope to accomplish in the spring game on Saturday?

Q: Coach Helton said the other day that you’ve been completing a lot of passes, but that he wanted to see you doing that without the coaches in your ear. How close do you think you are to being able to do that?

SD: “I definitely feel comfortable when the coach aren’t out there – controlling the offense. I think you could say I’m really feeling comfortable. For example, in the scrimmage we did, the whole no-coaches, coaches on the sideline, you know, I was kind of out there on my own, and I thought I did a really good job of handling everything. They’re out there for practice. They’re behind me as you can see, but yeah, reps without them behind me would obviously be key.

Q: Have you taken an underdog mentality to this competition?

SD: “I mean Max is obviously a vet out here, but no, I wouldn’t say I took that mentality. I definitely took the mentality of being the guy out here, as you’ve got to do when you compete for the starting job. But I’m still taking tips from Max, and doing everything I can to let him help me as well. And it goes both way in terms of thinking you’re the guy out here, and having that mentality, but also still being able to learn, and learn from the older guys and the coaches.”